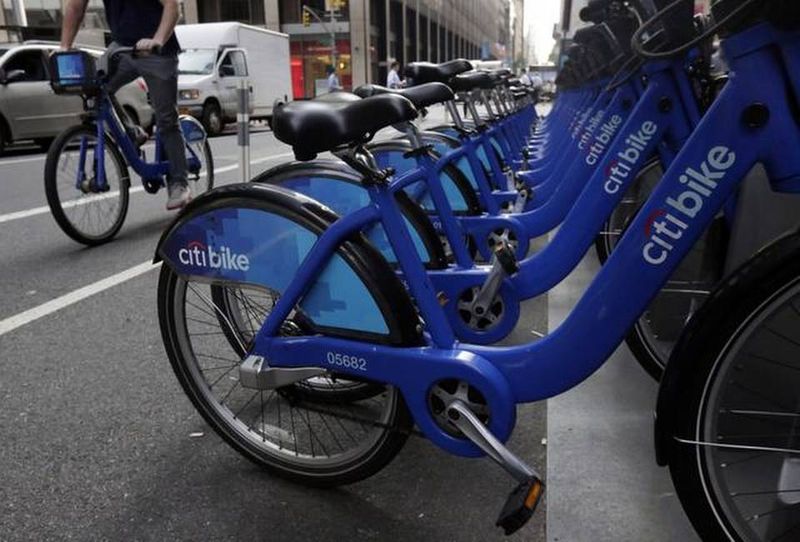 As it gets set to expand into Miami next month, DecoBike, the pioneering Miami Beach bike-share program, has stepped up its game by snagging a major sponsor: Citibank, the corporation that has underwritten the nation's biggest, best-known program in New York City.

That means Citi Bikes and their trademark blue likely will soon become a familiar sight across the Beach and up and down a dense urban corridor stretching all the way from Miami’s Upper East Side through downtown, Brickell and Coconut Grove.

The bike-share expansion into mainland Miami harkens a potential transformation of the city’s auto-dominated transportation landscape, building on an expanding network of designated bike lanes amid growing demand for alternate ways of getting around the urban core, which is rapidly becoming denser as droves of young people move into new high-rises.

“Everyone says downtown is fantastic, but everyone complains about the traffic,” said Miami Mayor Tomás Regalado, whose administration has backed the mostly private scheme, as he attended an informal unveiling of the new bikes and stations at the new Pérez Art Museum Miami on Friday. “We cannot just build more roads. So for the downtown residents, this is another amenity. And if it’s successful here, it could go into the other neighborhoods of the city.”

DecoBike, the private Miami company that will install and operate the expanded system at no cost to taxpayers, hopes to have its first bike stations on the mainland side operational during the first week in November. The company covers costs through memberships, rentals and commercial sponsorship.

As on the Beach, where DecoBike has generated 4.5 million rides since its launch in 2011, the Miami program is designed for short trips, with a network of 75 closely spaced stations that allow users to run an errand or go from home to work, restaurant or nightspot by picking up a bike at one spot and returning it at another. Members can grab a bike with the swipe of a card or a key fob.

Several stations will be placed at key cultural and civic attractions, including PAMM, Bayfront Park and Mary Brickell Village.

In both Manhattan and Miami Beach, analyses have shown that street safety has actually improved since the launch of their respective bike-share programs, probably because it’s made motorists, cyclists, pedestrians and other road users learn how to co-exist, experts say. On the Beach, there have been no serious mishaps among DecoBike users since its launch in 2011, chief marketing officer Colby Reese said.

One new independent study found that more cyclists are following traffic rules — stopping at red lights and riding with traffic instead of against it — since Citi Bikes was launched in New York.

Miami officials believe the same will happen on the mainland as motorists become accustomed to the presence of blue Citi Bikes on city streets.

“We do believe it will be safety through numbers,” said Carlos Cruz-Casas, the city’s transportation coordinator.

Reese said some Citi Bikes users will probably feel more comfortable using sidewalks, though that’s illegal in some areas and mostly discouraged elsewhere because it can be hazardous for pedestrians, especially on crowded downtown streets. City planners hope Citi Bike users will take advantage of a growing network of dedicated bike lanes and shared-traffic lanes. The latter are marked by painted, chevron-shaped “sharrows’’ that alert motorists to the presence of cyclists and tell riders where within the lane they should go.

Neither Citibank nor DecoBike would specify the dollar amount of the five-year sponsorship deal, other than to say it’s “sizable.”

But Citibank’s decision to sponsor Miami’s bike-share program, only the second the company has backed after New York’s, underscores the growing vitality of the city’s ongoing urban renaissance.

Citibank officials said they’ve been approached by numerous other cities about sponsoring bike-share programs, but chose Miami because of DecoBike’s successful track record on the Beach and the city’s growing importance as a market for the company, which focuses on urban neighborhoods such as downtown Miami and South Beach.

Citibank hopes to get a big-visibility bang out of the Miami program, just as it has from New York’s Citi Bikes, said Diane Ryan, Citi Retail Banking Miami Market President.

“It’s going to have a long-term positive impact on this community,’’ Ryan said.

The Citibank sponsorship means new, improved technology for the Miami program, including better docking stations and bikes than those used in the current DecoBike program, Reese said. It will also allow DecoBike to expand its planned Miami network from 50 stations and 500 bikes to 75 stations and 750 bikes, he said.

On the Beach, DecoBikes will be immediately re-covered and re-branded as Citi Bikes, losing their silver-and-blue color scheme. The entire existing Miami Beach fleet of 1,000 bikes will eventually be replaced by the newer bikes, which have three speeds, unlike the current single-speed models, Reese said.

By January, Reese also hopes to have the Miami and Miami Beach systems linked up, so that a bike rented in one city can be returned in the other.

Citibank has been the name sponsor of New York City’s bike-share program since its heavily publicized, and initially somewhat controversial, inception in May 2013. Because Manhattan is the nation’s media capital, the launch drew inordinate coverage, much of it initially focused on loss of some on-street parking spots to accommodate docking stations, complaints that the stations created visual blight, and concerns that riders would be mowed down by New York City’s aggressive drivers.

But New Yorkers immediately took to them. In spite of numerous technical glitches and financial issues blamed on the private operator in New York, the Citi Bikes program has been regarded as a massive success. The blue bikes were taken out for 13.2 million trips during the first 16 months of operation and have become ubiquitous throughout much of Manhattan, generating demands for expansion to other boroughs.

In fact, one reason for the program’s financial straits is that New Yorkers with memberships use it so heavily that the system has not generated enough revenue from higher fees charged to non-members.

The bikes, stations and technology used by DecoBike in its current Beach program as well as the new gear for Miami are different from the glitch-plagued equipment used in New York’s Citi Bikes program, Reese said.

Also on Friday, Citibank announced that it’s taking on sponsorship of the New World Symphony’s 2014-2015 season and two programs using the projection wall outside the organization’s Miami Beach home — the Wallcast concert series and the city’s SoundScape Cinema series.