Tech Runway is prepared for takeoff. 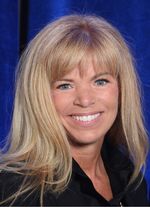 Selected startups, who do not have to have FAU ties, will receive office space for a year, a 16-week accelerator boot camp based on Stanford University’s Lean Launch curriculum, a team of mentors and a seed grant of $25,000. Tech Runway is led by CEO Kimberly Gramm, director of the Adams Center for Entrepreneurship at FAU (pictured here).

“We have tremendous assets in our region — successful entrepreneurs who are sharing their significant wisdom with startups and giving back to the community and students,” Gramm said. “We are integrating the entrerpeneurial world with the university world … to help create not only successful startups but a knowledge-based workforce.”

The building adjacent to the university in Boca Raton contains work spaces for the companies, as well as space for support functions, events and offices for FAU Tech Runway partners. The converted warehouse, perhaps fittingly, overlooks the executive airport, with views of planes taking off. “We hope executives flying in and out will take a golf cart over to check out our startups,” Gramm said.

Tech Runway has a team of 30 screened mentors so far, and Gramm hopes to grow that number to 100. Mentors were trained in the MIT team mentoring approach, she said. FAU faculty will also offer instruction and expertise; for instance, this semester an MBA class is helping the startups with operations and strategy.

The project is being funded with a $1 million grant from the state and $3 million from FAU, but Gramm said she will be making a case for more funds. “This is our proof of concept, just like a startup has to do. The first year we are going to do our best to prove the model and we are building it as a scalable model for satellite offices.” 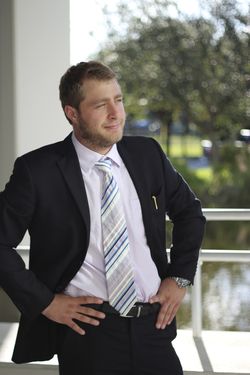 Jan Bednar (pictured here) and his company, BedaBox, are part of the first class at Tech Runway. When Jan Bednar moved here six years ago from the Czech Republic, he was bombarded with emails from friends asking him to buy and ship them things because from the Czech Republic it was hard to find retailers that would ship or the costs would be prohibitive. He started BedaBox about two years ago to bridge the foreign buyer with the U.S. retailer. As of late, Bednar and BedaBox have been on a roll. In April, he won the school’s Business Plan Competition, with $38,000 in prizes, then he won the competition at Florida Venture Forum’s Early Stage Conference and he graduated from FAU in May.

Now BedaBox is part of the inaugural Tech Runway program. “It’s really cool to be in an environment where everyone is trying to help you,” said Bednar, 23, who has already been impressed with the mentorship and the goal-setting process at Tech Runway.

The companies will spend up to one year in the program. Admission is open to all, not just FAU students. While companies will likely be technology-driven, they do not have to be. “We look for the best best opportunities with the right people leading them,” Gramm said.

In addition to Bedabox, the other startups in Tech Runway are:

* Interact TEAM – This company has licensed FAU technology to provide training for hospitals and nursing homes on navigating the Medicare processes for patient transfers.

* Stand4 – a website that connects individuals, charities and corporations to enhance the charity donation process so everyone benefits.

There will be a community event to unveil Tech Runway from 4 p.m. to 6 p.m. on Oct. 24 at the FAU Tech Runway facility, 901 NW 35th St., Boca Raton. Find information on Tech Runway later this week at www.tech-runway.com.