LaunchCode is the Square co-founder’s nonprofit in St. Louis, started only a year ago, that takes people aiming to work in technology but without the usual credentials companies look for and pairs them with top-level employers through paid apprenticeships and job placement. We’re talking about the self-taught, young graduates, the underemployed finding good jobs with big corporations like Carnival and AutoNation as well as tech firms. The program, which includes education and mentorship, has found quite a bit of early success in Missouri: The overwhelming majority of apprentices end up with full-time employment in technology.

“I moved down to Miami last month to bring a nonprofit called LaunchCode which has been a game changer in St. Louis to take people in nontraditional credentials and get them jobs as programmers. We were recently voted the best thing to happen in St. Louis in 2014 -- we want to make this the best thing to happen in Miami in 2015,” he said to whoops and applause at the packed crowd at Refresh Miami Tuesday night.

His declaration comes with some asterisks. LaunchCode will take longer to set up here than in St. Louis, he believes, for a variety of reasons -- the first being the CEOs don’t know him like they do in his hometown. Getting them all on board is key to making the model work, and his team is not going to do it halfway, McKelvey told me before the Refresh event. And yes, we have reported he was interested in looking at Miami for LaunchCode previously on Starting Gate, and LaunchCode was developed as a scalable program. But he has only just moved here – this was his first full week. So be patient ... and stay tuned.

McKelvey was part of a Refresh Miami event Thursday themed on the future of mobile payments. The panel also included Alexander Sjögren of YellowPepper, Ali Aidi of Mastercard and Josh Unseth, of Alarm Grid and co-organizer for the South Florida Bitcoin Meetup. They talked about some of the same topics discussed at Fintech Latam two weeks ago: the need and the potential, of course, but also the role of Bitcoin and other digital currencies, the power of the solutions to help the unbanked, fraud, the role of biometics and the feeling that it could be ApplePay that finally brings mega-attention to solutions offering frictionless payments. The crowd of 300 or so packed the sold-out venue: the new Idea Center @ MDC on Miami Dade College’s Wolfson campus, which will likely be a hub for entrepreneurial events and activities.

One thing everyone on the panel agreed upon: The payments space is ripe for innovation. "80 to 85 percent of the world's payments and trasactions are still made in cash. That's an astounding number... and a huge problem," said Aidi.

"It is possible to innovate in the payments space," said McKelvey, who shared some stories about skepticism he met early on co-founding Square. "People thought we were nuts when we started a payments company, a bunch of tech entrepreneurs," said McKelvey. "For the first year, I had  very seasoned executives, one in particular, taking me to dinner and telling me I was an idiot. ... I had no argument yet, he was a CEO of a big public company and I was a startup -- thanks for dinner." 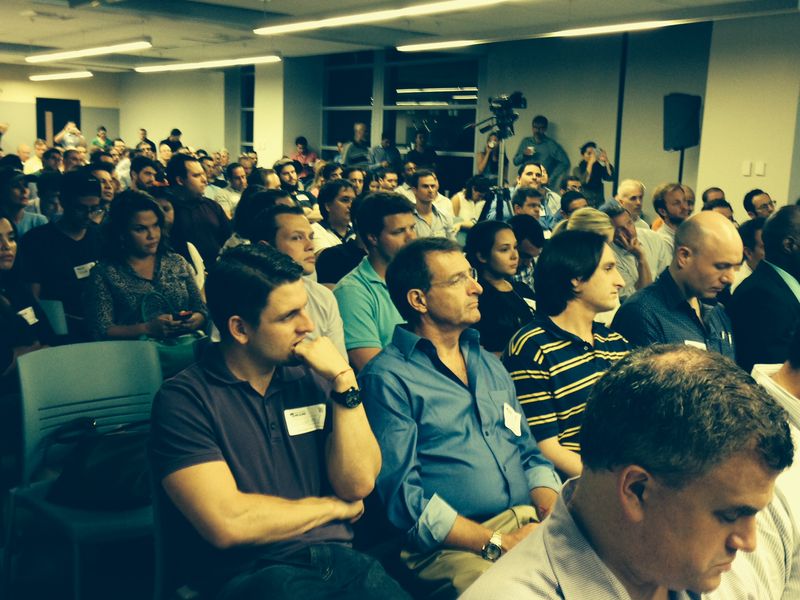 The crowd at Refresh Miami at Miami Dade College Thursday night -- the one empty seat is mine... At top: from left,  Alexander Sjögren of YellowPepper, Jim McKelvey of Square and LaunchCode, Josh Unseth representing Bitcoin, and Ali Aidi of Mastercard discuss the future of mobile payments with Brian Breslin, co-director of Refresh Miami.