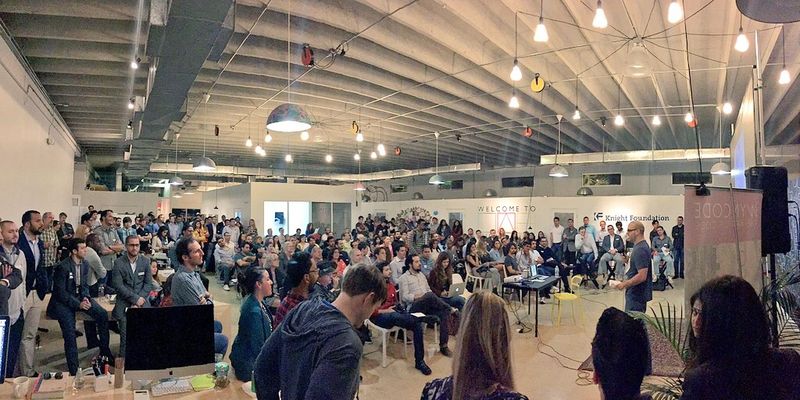 By Juha and Johanna Mikkola

Wyncode’s Pitch Day Tres brought together a standing room only crowd of over 250 people to the LAB Miami on Thursday night.

Pitch Day is quickly becoming a rite of passage for junior developers entering the Miami tech scene. It’s incredible to see the support and interest from the Miami tech community. We’re thrilled to see the quality of apps the Wyncoders are creating and that several of them already have interviews lined up!

The twenty-one Wyncoders of Cohort 3 had five minutes each to demonstrate the web apps they conceptualized and built during the last two weeks of their nine weeks at Wyncode.

Try the web apps for yourself:

For photos of each presentation, check out Wyncode’s Pitch Day album on Facebook.

Meme.menu, a start-up co-founded by four Wyncode alumni, introduced an award given to the two students from the graduating cohort who most embody the spirit of Wyncode. The award includes 3-months of co-working space at The LAB Miami and mentorship from Meme.menu’s team. The inaugural award went to Anuvis Mejia and Ray Braaf.

We made a few announcements, including:

“I loved representing Wyncode and the MiamiTech community in the HackerRank CodeSprint”, Walter said. “It's cool to know I was able to do so well with the foundations I learned at Wyncode and work experience I gained at CareCloud, especially without a computer science degree."

Walter is now paying it forward as a Teaching Assistant at Wyncode. His performance in the CodeSprint is exciting for Wyncode and for MiamiTech, as he was up against students from many established code schools - including New York’s Flatiron School, Hackbright Academy and the Turing School of Software and Design.

Wyncode's next cohort a The LAB Miami begins on Jan. 12 and just five seats remain. Interested students should apply online at www.wyncode.co by clicking ‘Apply’.

Juha and Johanna Mikkola are co-founders of Wyncode. Posted by Nancy Dahlberg at 11:54 AM in Education, Guest Posts, Technology | Permalink | Comments