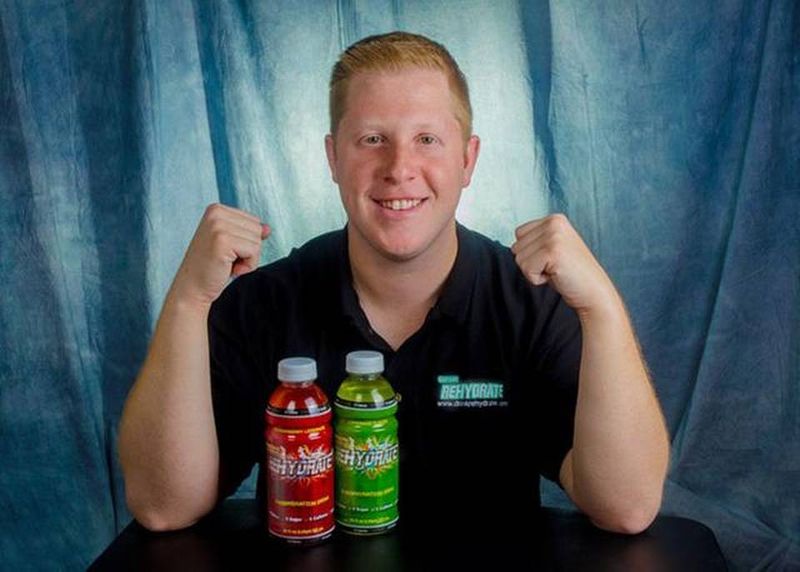 Concept: Rehydrate is the healthy alternative sports drink because it contains no sugar, no calories, no caffeine, no fat. It also contains three times the electrolytes and two times the vitamins of the competition. The company says it is safe for athletes, outdoor workers, children and pregnant women and is good for colds/flus and helps with hangovers.

Story: The idea for Rehydrate came to Zack Gottfried in 2008 during summer drills in West Virginia where he coached Division 1 college football for West Virginia University: “The drill was to run up and down a steep hill after workouts, in the hot summer sun with not much of a breeze. One of my quarterbacks, Jarrett Brown, experienced a full body cramp. We gave him two 32-ounce bottles of a popular sports drink to no avail. He needed to be hospitalized.”

Turns out, most of the popular sports drinks were developed almost 50 years ago. “Our way of life and our training regimen has changed considerably over that time. I thought there just had to be a better way,” Gottfried said. In doing informal interviews, he discovered that children were consuming large amounts of sugar in their sports drinks.

“They were ingesting 34g of sugar in each bottle, which is the equivalent of over two candy bars. I worked with experts and came up with an ideal formula … with 14 great tasting flavors,” Gottfried said.

Recent milestones: Launched production in July; executed an agreement with a Florida distributor covering 2,900 stores; product selling in more than 100 stores including 7-Elevens in Florida; executed an agreement with the largest beverage distributor in West Virginia; opening 500 new stores in January in West Virginia; launching two new flavors, orange and blue mountain; executed partner agreements with athletes. West Virginia University declared the product its official drink for football and is bringing it to its bowl game Dec. 29.

Advisor’s view: John Carson, the former president of Cadbury Schweppes North America — which owned Snapple and RC Cola — has been helping the company for about a year, attracted by the passion and determination of the team. He has seen much progress in product development, packaging and leveraging contacts in the sports industry (some of whom are on Gottfried’s management team).

His advice: A category dominated by major brands is a tough place to start, so the team needs to continue to be very focused on why they are different and how they are different — a better-for-you sports drink that tastes good, too.

“Don’t be frightened of being a David against Goliath,” Carson said. “Retailers can grudgingly admire a David if you have done your homework really well. You owe it to yourself to be polished and really know your story, and you have to look at everything through your customer’s point of view.”