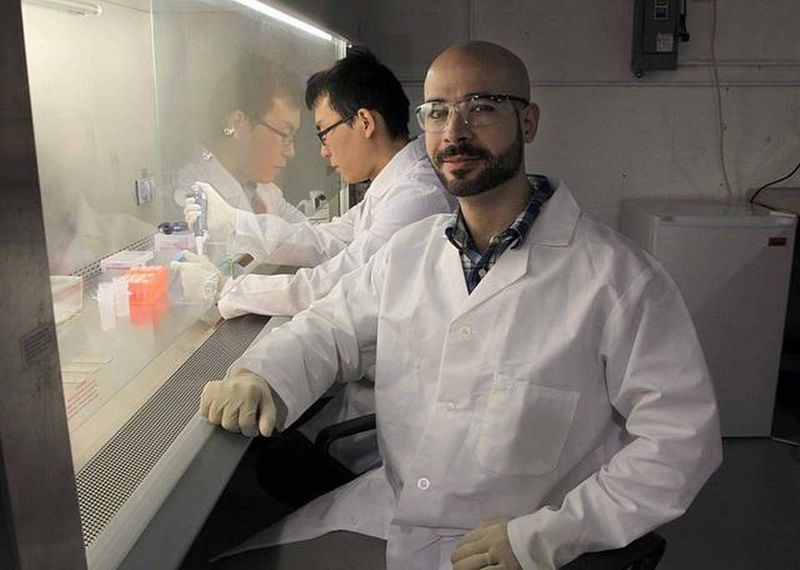 Working out of a Starbucks in 2012, Obdulio Piloto saw an article about the Peter Thiel Foundation’s Breakout Labs seeking revolutionary ideas in technology to fund.

He and Ian Cheong, a friend he met while they were both obtaining their doctorates at Johns Hopkins University School of Medicine, thought they had one: a universal platform that would allow diagnosis for multiple diseases easily, cheaply and quickly. Many people in developing countries lack access to life-saving diagnostic tests because of their high cost and the countries’ lack of advanced medical infrastructure.

Piloto sent in that idea for a company called Entopsis.

About a month later, the Peter Thiel Foundation, set up by the founder of PayPal, called and said Breakout Labs believed the idea could be world changing and chose Entopsis for a $160,000 grant. Entopsis was one of only 16 startups around the country selected so far and the only one based in Florida.

“I said ‘you understand I work [out of] Starbucks. I don’t have a lab or a team,’ ” Piloto (pictured above) recalled telling Breakout Labs. “But they understood the science, the implications and where this could go. They said this is a grant to test out your crazy idea.”

Fast forward to today and Entopsis has a small team of PhD-level scientists working in a lab at the Hialeah Technology Center. The company has prototypes and it has begun testing its platform with partners in the areas of cancer and infectious diseases, said Piloto, Entopsis’s CEO,  who majored in microbiology at Cornell University, received his doctorate from Johns Hopkins, where he did his graduate thesis research on cancer immunotherapy, and did post-graduate work at Stanford.

“We are interested in investing in groundbreaking ways to reduce costs and increase efficiency for hospitals and healthcare professionals. Entopsis has the potential to do both. By employing nanoengineering to develop a universal diagnostic platform that can be used in a clinical setting, Entopsis can simultaneously evaluate small molecules, proteins and cells from any sample at a significantly lower cost and in less than an hour,” said Melissa Krinzman, co-founder of Krillion Ventures.

“It was a chance to participate at an early stage in a company with a technology that could really benefit all of us. If they’re right, we will have a good investment – but the company will have done something good for the health of people all over the world,” added Darius Nevin, partner with G3. “And Obdulio is the kind of leader you want to help succeed any way you can.”

Entopsis is developing an innovative molecular profiling platform that will allow easy and inexpensive diagnosis using NuTEC, a single device diagnosing many diseases rather than many individual tests in the hospital each diagnosing a single disease. This testing technology could be applied to almost any substance and across a range of industries such as food science, with food contamination and agriculture, with disease detection in livestock and for people to be tested for various diseases, Piloto believes.

“Breakout Labs looks for novel cutting-edge science with broad application. Entopsis is based on an entirely new way to analyze biomolecules that, if successful, could become the new paradigm for rapid molecular identification in contexts ranging from food safety to medicine,” said Lindy Fishburne, executive director of Breakout Labs, in an interview in November. In addition to the funding, Breakout Labs has provided valuable mentorship and connections, said Piloto. “It’s opened a lot of doors,” he said.

Entopsis, in the research and development phase, is working with local hospitals that are collecting samples for Entopsis to beta test on its platform. It’s also partnering with a global diagnostics leader it can’t name yet and is in the process of forging a partnership with FIU’s engineering school. It’s testing with urine samples now, but in the future it plans to add blood and saliva and could perhaps test breath for a number of diseases. “We are keeping our options open,” Piloto said

“This is also a true Miami story that we believe will be replicated in the months and years to come,” said Krinzman. “Obdulio grew up in Hialeah, left to attend the best medical schools in the country and then returned to Hialeah to launch his company. We are excited to support him and his remarkable team.”