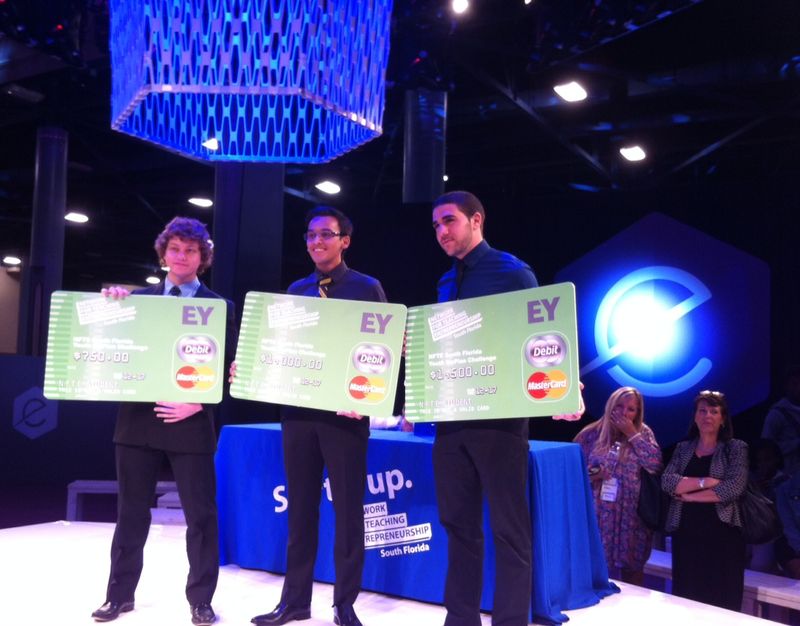 NFTE BizPlan Competition Winners:  (l to r) Zack Walsh, 3rd place, Kevin Diniz, 2nd place, and Jason Ramadan, 1st place, will travel to New York in October to compete against other high school students for $25,000 in funding.  They pitched their businesses May 4th at Emerge Americas on the Expo Stage.

The student who took the top prize in the Network for Teaching Entrepreneurship's (NFTE) BizPlan Competition at the Emerge Americas conference won, in part, because he talked about how he'd failed in the past.  Jason Ramadan earned the top spot in the contest for Cliff Fall, a game for the IOS platform. Judges liked that he'd created another game before that had problems.

"I did feel confident this time," said Ramadan, a senior from Coral Springs Senior High, who was a first time competitor, "With my other game though, I didn't even realize all the mistakes I'd made.  It was pretty bad," said Ramadan.
One judge, Maura O'Donnell, who works in Business Development and Finance, for MasterCard, said entrepreneurs must learn from their mistakes to improve.  She said the panel liked that Ramadan found lessons in his errors and also that he studied his biggest competitor and addressed several areas to differentiate his product from theirs for gamers - personalization, creating different skill levels for players, and offering users the choice for a user to opt out of advertising.  Ramadan received a $1500 prize from MasterCard.
Second place went to Kevin Diniz, a senior from Piper High School, for his app idea to simplify the college scholarship research process.  Third place went to Zack Walsh of Coral Gables Senior High who pitched an idea to create an app that would offer roadside repair and rentals to cyclists stuck on the side of the road. Both students received prizes of $1000 and $750 respectively. O'Donnell said both ideas were strong but that Ramadan was further along with product development.
All students were given eight minutes to explain and sell their business idea with another three minutes for questions.
The three winners will compete in New York City in October in a national competition for a $25,000 in funding.
NFTE brings  entrepreneurship programs to low-income schools globally, and in South Florida throughout Miami-Dade and Broward counties.
-Karen Rundlet