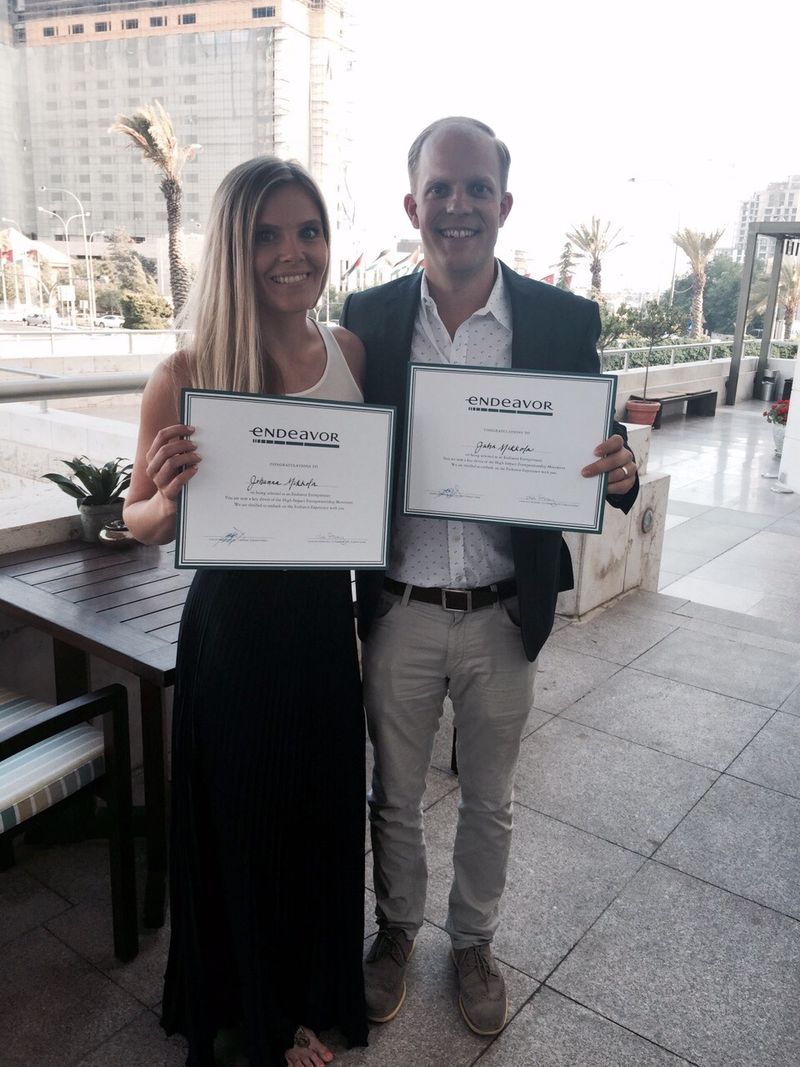 At Wyncode Academy’s pitch day last week, some of the boot camp graduates who learned to code and created an entertainment app  also formed a company called Outnix. Not only did they win the pitch day for their app –- and $1,000 in cash -- they also already raised $50,000 from angel investors ahead of the pitch day to help bring their app to market. “We were very excited for them,” said Juha Mikkola, CEO of Wyncode, a coding school. “That was a Wyncode first.”

And here’s another first for the growing Miami-based tech-education company: Halfway around the world, Juha and Johanna Mikkola, the husband-wife co-founders, were selected Thursday as Endeavor Entrepreneurs, an honor that brings with it a global network of mentorship and support services to help them expand their business (pictured above, receiving the award), Endeavor Miami announced.

Endeavor is a global organization that supports selected high-impact entrepreneurs, and the Endeavor Miami office launched in the fall of 2013. With the addition of the Mikkolas who run 15 South Florida entrepreneurs from nine companies have now been selected. Endeavor Entrepreneurs receive targeted services as well as access to capital, markets and talent.

The Wyncode entrepreneurs were selected by panelists with global expertise at Endeavor Global’s 59th International Selection Panel in Amman, Jordan. In all, a total of 20 high-impact entrepreneurs representing 15 companies from 10 countries were also selected at this panel.

“It was a really rigorous process, and the Miami mentors and staff at Endeavor have already helped expose us to veterans that are helping us grow our business,” said Johanna Mikkola on Thursday from Amman. “We are excited to have that support to help us make good, sound decisions and think bigger.”

In a new industry that has sprung up to help reverse a growing shortage of technology talent, Wyncode Academy offers students a nine-week full-time coding boot camp with a curriculum that includes front-end web design/development and back-end/server coding and is designed to meet the needs of local hiring partners. “We are focused on the double-impact of this — creating jobs for people to teach coding as well as filling roles with new local tech talent,” said Juha Mikkola.

Since May 2014, 88 students from five cohorts have graduated from Wyncode’s boot camp in Wynwood’s The LAB Miami. Wyncode’s placement rate is 92 percent, meaning that many found technology jobs or started their own companies, like the OutNix team did, within three months of graduating, the Mikkolas said. Miami’s Watsco Ventures, Cloud Logistics in West Palm Beach and Kipu Systems in Miami have each hired four Wyncode graduates; MDLive in Fort Lauderdale has hired three.

Wyncode, which is state certified, is starting its sixth cohort with 30 students in Wynwood next week and has recently expanded to Fort Lauderdale. Its first cohort at General Provision in FAT Village (Flagler Arts and Technology Village) is wrapping up, and several more cohorts are planned this year in both locations. Wyncode is also starting to offer part-time programs, such as one in iOS development. Statewide expansion – and beyond – is in the longer-term plans for the fo-founders who have been invited to the White House – twice.

Laura Maydón, managing director of Endeavor Miami, said that the Mikkolas not only have the leadership potential to scale their company but are already helping to narrow the talent gap in South Florida. “Panelists were impressed by the preparedness of the founding team, their clear strategy for growth, while maintaining high quality of education and collaborative culture,” she said.

Endeavor Miami launched its operations in September 2013, backed by a $2 million investment from the John S. and James L. Knight Foundation and an active local board of business leaders. “The growing group of diverse Endeavor Miami entrepreneurs signals a corresponding growth in the city’s innovation ecosystem,” said Matt Haggman, Knight Foundation program director for Miami. “Wyncode will now be able to benefit from Endeavor’s wide network of high-impact entrepreneurs and expand their focus on preparing emerging tech talent to the benefit of Miami.”

For more information on Endeavor Miami or to nominate entrepreneurs, visit www.endeavormiami.org.