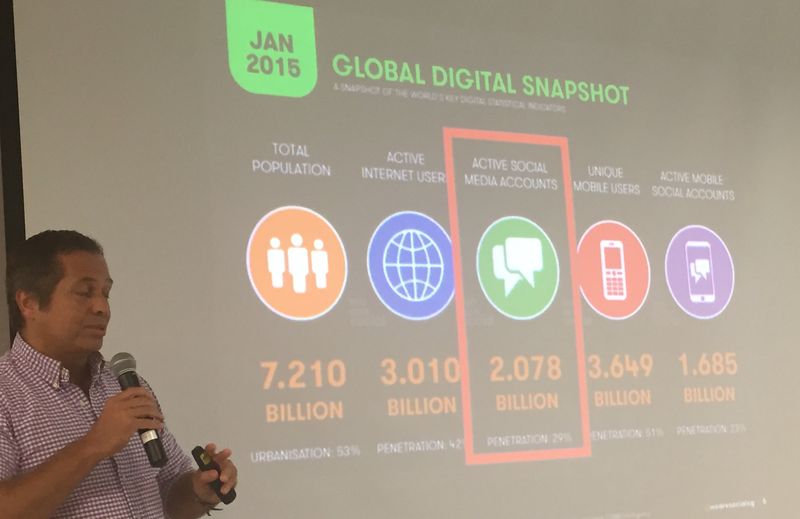 Did you know Miami is No. 3 in the world for selfies? Alex de Carvalho shared this Magic City claim to fame and other facts, figures and advice about social media -- in which a third of the world is now participating in -- at a recent talk he gave to the Miami Herald Media Company earlier this week.

Want more about the present and future of social media and how better to use it in your business? You’ll  have to go to Social Media Day South Florida on Sunday, June 28, with a full afternoon of talks planned, ending with a sunset cocktail hour. The event takes place from noon to 9 p.m. at the Hyatt Pier 66 in Fort Lauderdale.

Here’s more about the event from de Carvalho’s press release:

Popularized by Mashable, Social Media Day is an international celebration of digital media that attracts thousands to events around the world. Social Media Day South Florida was one of the first of these global meet-ups to take a conference-style approach. Attendees will learn from expert speakers on digital media trends, discover career opportunities and network with the region’s brightest digital media minds.

Noted as one of the top Social Media Day events, the South Florida gathering is celebrating its fifth year.  “There is a groundswell of digital media activity and expertise in South Florida. This is not just a celebration of social media in South Florida; it is a valuable opportunity for learning, networking and recruitment,” said de Carvalho, Knight Innovator in Residence at FIU School of Journalism and Mass Communication and President of Social Media Club South Florida.

This year’s keynote address will be provided by Adam Boalt, CEO of LiveAnswer. Based out of Pipeline Brickell, LiveAnswer is one of South Florida’s fastest growing startups and a shining example of the region’s prowess in digital innovation.  While Boalt will be discussing the future of the digital media landscape, his company LiveAnswer also sees Social Media Day South Florida as a valuable opportunity for talent recruitment. “As South Florida grows its identity as a home for experts in social and digital technology and trends, Social Media Day South Florida is a platform to share our individual expertise while building our collective knowledge base,” said Boalt.

For instance, LiveAnswer has partnered with Enrique Iglesias’ Atlantico Rum to develop a VIP experience centered on talent recruitment. Those who apply to become LiveAnswer’s newest “Marketing Rockstar” will gain two access passes to the Atlantico Rum VIP Suite during Social Media Day.

Other topics include branding (personal and company), SEO trends, tweeting responsibly, building a blogging network and getting the most from the various platforms. Presentations and panel discussion topics can be viewed here: www.smdaysf.com/agenda.

Those looking to join the online conversation can do so here:

For more information on Social Media Day South Florida and tickets, which cost $33 in advance or $48 at the door, visit www.smdaysf.com.