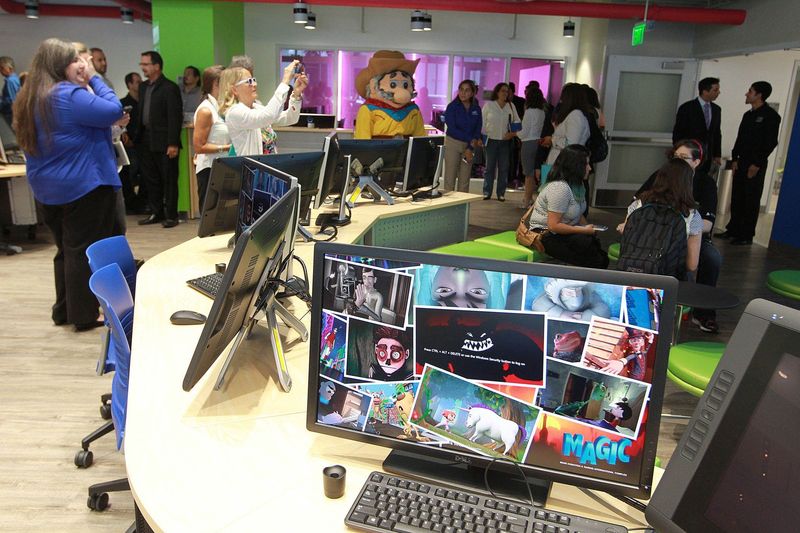 Put down your controller. Pick up your pencil. The test is about to begin.

Miami Dade College is launching a new academic program in animation and gaming at its downtown Wolfson Campus when school starts Monday.

About 80 students have signed up for the two-year associate’s degree track, according to Mauricio Ferrazza, chairman of the program and a former animator at Univision.

A 20,000-square-foot facility called the Miami Animation & Gaming International Complex (MAGIC) will house the $5.7 million center on the ground floor of the college’s existing Emerging Technologies Center of the Americas. MAGIC contains a motion capture studio, design labs, audio engineering and color suites, and other spaces for students.

The sophistication of the equipment there is “mind-blowing,” said Michael Marante, 24, a student who is part of MAGIC’s inaugural class.

Marante says his dream is to work at Walt Disney Imagineering, the global giant’s design arm.

He graduated with a degree in business administration from MDC last year but knows he needs more experience in design.

Earlier this summer, an adviser from the college suggested he visit the new MAGIC facility.

“I was enraptured,” said Marante, who grew up in Hialeah. “The incubation rooms, the motion capture room, the audio engineering studio. They blew me away.”

Video games aren’t just for fun these days. They’re a serious business. But local gaming studios — a small but growing industry in South Florida — often complain about how hard it is to find qualified workers in the area.

And the techniques used to make a Call of Duty solider jump out of a helicopter are spreading to other industries.

“Other fields are using the animation techniques developed in gaming,” Ferrazza said. “We’re seeing it in architecture, aviation, medicine, science and forensics.”

The new program fits into a wider priority for political and business leaders in Miami-DadeCounty: diversifying the local economy, which leans heavily on construction and tourism.

“Having a state-of-the-art program like this helps us grow as a technology and creative design community,” said Jaap Donath, senior vice president at the Beacon Council, the county’s pub" v:shapes="_x0000_i1025">lic-private economic development arm.

Donath said Miami-Dade has about 1,500 jobs in animation and related fields and that he expects that number to grow.

“That’s why it’s so important to have an institution like MAGIC in place,” he said. “It’s a major asset.”

The Beacon Council is pushing for more job creation in certain industries that pay well but do not require a bachelor’s degree. Among them are creative design and information technology.

MAGIC will ultimately have room for about 600 students.

The majority of the program’s funding comes from the Mitchell Wolfson Sr. Foundation. The animation studio PIXAR contributed $100,000 in software. Locally based custom PC manufacturer Alienware established a $50,000 scholarship fund that will fund eight students for the coming academic year.