« Mayor Gimenez: Uber, Lyft will be legal in Miami-Dade by end of year | Main | Endeavor Miami to honor co-founders of Square, Gilt Group » 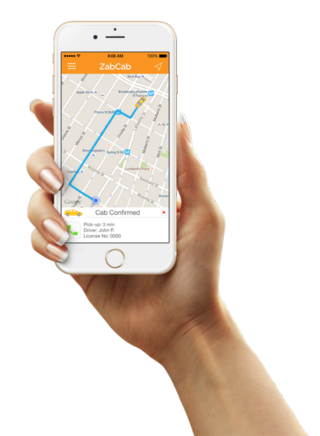 Calling a taxi in South Florida no longer requires dealing with an actual human voice, just nimble fingers on a smartphone keypad. The New York-based company ZabCab unveiled an app Monday that will allow passengers in Broward and Miami-Dade to summon a regular taxi — though not Uber or Lyft — with a cellphone app.

Hundreds of Miami-Dade taxis began accepting calls from the app Monday, and ZabCab officials say they hope to have 1,500 of the county’s 2,200 cabs signed up by next year. And Broward’s Yellow Cab, which controls about three-quarters of the county’s legal taxis, has moved its existing app onto the ZabCab platform.

“This is going to give our customers — our residents and visitors — an easier way to get a taxi,” said Miami-Dade Mayor Carlos Gimenez, who attended ZabCab’s press conference at the Perez Art Museum Miami and made the first official call for a taxi on the company’s software.

“More and more of our younger people — and even people my age — are wanting to use their cell phones to get a cab quickly and easily,” he said. “This is definitely a big plus.”

The bilingual app, available for both Android and iPhone, in some ways resembles those introduced so successfully by Uber and Lyft. A prospective passenger is able to see cabs closest to his location and whether one of them has decided to accept his call. Then he can track the cab’s progress.

And, like Uber and Lyft, the app allows passengers to rate their drivers. Cabbies with low marks will be kicked out of the ZabCab system.

That’s where any resemblance to Uber or Lyft ends, though. Customers will still pay their drivers directly, rather than using credit cards through the app, and the prices will be the same as those set by county law.

There’s no charge to customers for using the app — or to drivers, either. In 2016, ZabCab will start charging drivers a flat 99 cents per trip for every customer obtained through the app.

“We won’t be making any money for a couple of years,” said ZabCab CEO Martin Heikel. “But eventually we hope to make a lot. We’re going to make this the first truly national taxi app. Once it’s on your phone, you can use it to get a taxi in Miami or San Francisco or New York, wherever you are.”

ZabCab has been operating on an experimental basis in Manhattan for about two years, but South Florida is its first big full-service rollout. The company plans to add 24 other metropolitan areas next year.

Apps are not completely new to the South Florida taxi industry; some cabs — it’s not clear how many — have been accepting fares using an app called Ways2Ride for a few months.

But industry officials say apps are the way of the future.

“I keep trying to explain to the county commissioners that radio dispatching is as old as horse-drawn carriages, and soon it will be about as common,” said Diego Feliciano, president of the 1,200-member South Florida Taxicab Association. “Uber and these other companies were early at the get-go, but lots of companies are going to be doing this. It’s just another way, the newest way, to call a cab.”