Robotics startup in the spotlight: Neocis 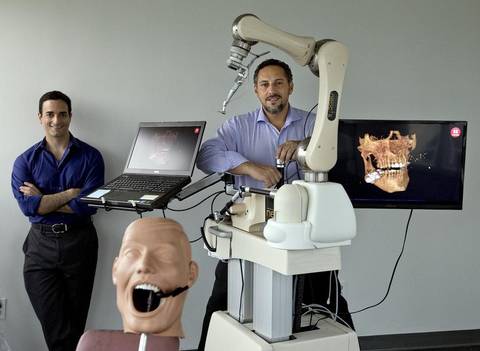 Alon Mozes, left, and Juan Salcedo are CEOs of Neocis.

Alon Mozes worked at a number of young companies, including MAKO Surgical from the early days through its IPO. Then the Miami biomedical engineer took the plunge with his own robotics startup, Neocis.

Neocis is creating a robotic guidance system for the fast-growing dental implant market. The system provides the dental surgeon guidance both physically and visually before and during surgery, aiming to reduce surgery time and improve accuracy and outcomes through a minimally invasive approach. The surgeon’s procedure is planned in the software beforehand and the robot guides the drill while the doctor can also see everything on a large screen. “It’s perfect execution of your plan every time,” said Mozes. And if the surgeon needs to change her plan, that can be done on the spot within the software.

Mozes grew up in South Florida, and after getting his bachelor’s and master’s in engineering at MIT, he got his start in Silicon Valley. He worked for SportVision, an innovator in special effects for sports broadcasts like that yellow first-down line, gaining knowledge that would later come into play in robotics. But he wanted to come back to Miami, and returned in 2004 to study biomedical engineering at the University of Miami, earning his Ph.D. a few years later.

In 2005, he became one of the first 20 employees at MAKO Surgical. Mozes helped the robotics company develop software for its ground-breaking Rio system for orthopedic robotics surgery, create its first cadaver lab, and get its first FDA clearance.

He met his future co-founder in Neocis there as well: Juan Salcedo. Salcedo, who received his bachelor’s in mechanical engineering and master’s in biomedical engineering at Florida International University, was a key player in the design of Mako’s first and second generations.

Both men believed there was an unmet need and a lot of potential in the fast-growing dental implant market for robotic surgery. The $4.5 billion dental implant market, driven by an aging population and rising awareness about oral health, is estimated to reach nearly $8 billion by 2020, according to a 2014 research report.

They began working on their idea about 2009, Mozes said. Their prototype, made with scrap metal, looks nothing like what they have now, but it is proudly displayed in their office. “Nights, weekends, in the garage, that’s our beginning,” Salcedo said.

Neocis raised seed funding — its first investor was Fred Moll, who founded Intuitive Surgical and is well-known in the industry — at the end of 2012 and hired its first employee in January 2013. The company’s next multimillion-dollar injection came from a mix of local investors from Mozes’ Mako network as well as some from California.

Now with 11 employees, Neocis has completed its first-generation system and is going through the FDA process. Neocis is raising more money now.

Still, funding has been a challenge, Mozes said, because South Florida is still not seen from the outside as a typical environment for robotics and medical device innovation. But he’s happy to be seeing a growing healthcare innovation ecosystem here, with companies like MAKO, OrthoSensor, Modernizing Medicine and CareCloud among the leaders of the current generation: “It’s great to see them growing here and finding success.”

See all four healthcare startups in the spotlight here.