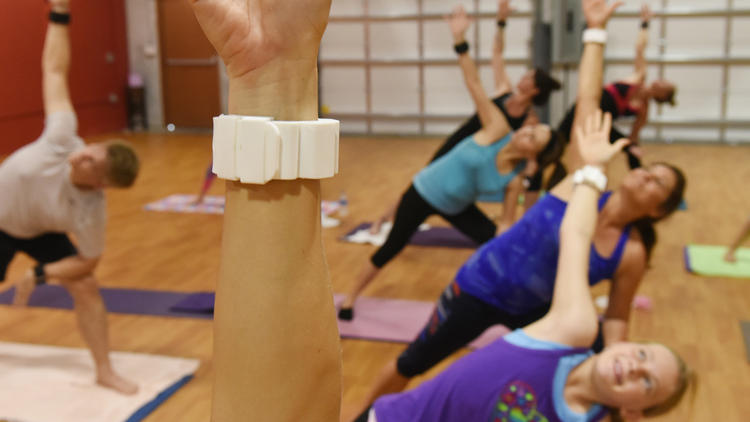 Yoga Factory & Ftiness client Jenene Caramielo from Weston and others use Tone-y-Bands during a hot yoga class Monday in Weston. Photo by Taimy Alvarez / Sun Sentinel)

Four local companies are semi-finalists in a national Small Business Administration competition for products and services that affect women and families.

The startups in the InnovateHer competition are:

Tone-y-Bands and Child Rescue Coalition are members of the latest class of entrepreneurial ventures in Florida Altantic University's Tech Runway program in Boca Raton, which provides $25,000 in funding as well as mentoring and resources to startups.

Tone-y-Bands was born when Janice Haley's husband was working on the house and said, "I wish I could get more [exercise] benefit out of what I'm doing." Not finding what they wanted for wrist weights, the Haleys developed their own, Tone-y-Bands, designed to burn more calories. Haley plans to sell Tone-y-Bands to fitness instructors and studio owners, who can sell them to their clients. She also is developing electronic versions of the bands, which could include exercise monitors or other options.

Child Rescue Coalition has its roots in a family business, TLO in Boca Raton, which was sold in 2013 to TransUnion. After her father, programmer and entrepreneur Hank Asher, died in 2013, Carly Asher Yoost and her sister Desiree Asher stepped in and ran the business. As part of the sale, Carly Asher Yoost was given the technology developed to track child abusers on the Internet. The tools show investigators how to track child abusers via the Internet as they share child pornography. "We have had over 6,000 arrests in the last four years alone directly from our system," she said.

Child Rescue Coalition works with the Florida Department of Law Enforcement and the Internet Crimes against Children Task Force in South Florida, as well as law enforcement agencies in all 50 states and 57 countries. The nonprofit is now developing a forensic tool that it plans to sell to law enforcement that will automate the process of retrieving information that could lead to a conviction, including deleted files.

Natural Birth Works is a 2-year-old business founded by midwives Gelena Hinkley and Sandra Lobaina that offers midwifery care, childbirth classes, postpartum care and other services for women. The company will open a birthing center in March in Margate, Hinkley said.

"Some women don't want to go to hospitals, but they don't want to stay home either," Hinkley said. The new center will give them the option for midwifery care in a setting outside the home for the birth of their baby, she said.

Flat Out of Heels, launched in May 2012 by Dawn Dickson, are flat rollable shoes designed to be emergency shoes to carry and wear when high heels become unbearable. The company's website, FlatOutofHeels.com, claims it has larger sizes and more designs than competitors, as well as harder, more durable soles. The flats are sold online and in stores.

The four South Florida companies are among 12 semi-finalists in Florida. Ten of the semi-finalists nationwide will be chosen by Jan. 15 to compete for a $70,000 prize and connection to resources in the national InnovateHer competition in Washington, D.C.