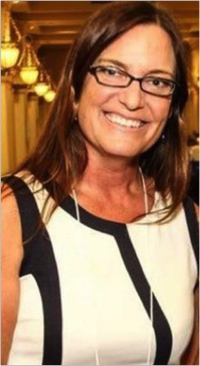 It’s official: Deborah Johnson is the new president of the Miami Chapter of Keiretsu Forum South-East, the 31st chapter of the international angel organization.

Keiretsu Forum was founded in 2000 in the San Francisco Bay Area, and now has 40 chapters and more than 1,500 accredited investor members across the globe.  Keiretsu Forum members typically provide capital in the $250k – $3 million range in Series A and B funding series.  Members collaborate in the due-diligence, but make their own investment decisions.  Keiretsu Forum members have invested more than $550 million in technology, consumer products, Internet, healthcare, life sciences and real estate companies.

“I’m excited to facilitate a role connecting our local Florida entrepreneurs to funding.  We have a growing entrepreneurial ecosystem in Miami and Keiretsu’s proud to be a part of it,” said Johnson, who has been no stranger to South Florida recently,  attending events regularly.

Johnson has an extensive history working with entrepreneurs, investors and tech-sector innovators in Southwest Florida.  The founder of Plum Ventures, she has worked in region building awareness of the entrepreneurial community as the special events coordinator for Tamiami Angel Family of Funds.  She also served as the administrator for the Gulf Coast Venture Forum for several years, running chapters in Naples and Sarasota.  That entity has now morphed into Fusion Pointe, a non-profit that she currently consults with, providing mentorship to entrepreneurs and high-impact networking.

She has hosted VenturePitch South Florida from Naples to Sarasota as well as founder talks and meetups.   She also works with the Southwest Florida Regional Technology Partnership whose mission is to be the leading technology interest group in Southwest Florida.

Johnson plans to continue to build partnerships with other angel and venture organizations in South Florida.  Keiretsu's Miami chapter welcomes interested investors seeking membership or startups seeking funding; contact her at DJohnson@KeiretsuForum.net. The organization, which launched in Miami in 2014, meets monthly and the next meeting is Feb. 9. It has not made any local investments yet although one is in due diligence.

To find out more about Keiretsu Forum South-East, or to learn about angel investment in general, visit http://www.KeiretsuForum-SouthEast.com.