What does a feisty young Miami spirits company do to get the attention of a huge celebrity?

If you are Atlantico Rum, well, you send rum. But not just to any celeb: You send it to one you know really likes fine rum. 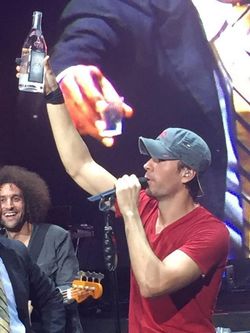 That would be Enrique Iglesias, the recording artist and record producer — the Gulliver Prep grad who became the King of Latin Pop. He now includes the rum in nearly all his performances.

Atlantico co-founder Aleco Azqueta reached out to the star after finding out, from a mutual friend, that Iglesias is a rum aficionado. Atlantico didn’t hear from Iglesias right away. But on YouTube a short while later, the team was surprised to see the star hoisting an Atlantico Private Cask bottle as he toasted an audience member he invited on stage to sing with him during a Madison Square Garden concert. That was four years ago.

“It was a surprise to us,” Azqueta said. “We were hoping he would have it backstage; we had no idea he would use it on stage. It was a very organic moment, very natural.”

Within a few months, Azqueta and his co-founder Brandon Lieb met with the performer and asked him if he would like to be involved with Atlantico. Iglesias told them he doesn’t do many brand sponsorships but he likes the brand a lot, it fits with his lifestyle and he wanted to be involved on an owner level, Azqueta said.

Since then, Iglesias has continually used the onstage toast — and the Atlantico brand — in his shows. And these “Atlantico Moments,” as they’re now called, have gone viral on social media.

That kind of authentic product placement is priceless.

Iglesias is an investor and full partner in the company. The star has certainly helped get more people to learn about the brand. “His follower base is slightly larger than ours,” Azqueta quipped during an interview at Sweet Liberty, a craft spirits bar in Miami Beach. “He is the No.1 Latin artist of all time, he has sold over 100 million albums, he has over 50 million Facebook fans.”

Indeed, Atlantico saw growth of about 40 percent in the year after the Atlantico Moments began, Azqueta said, and it has been a gift that keeps on giving. Iglesias has taken to wearing Atlantico caps everywhere — in his concerts, in interviews for Extra, in his videos. He also placed Atlantico in a lot of his music videos, including Bailando, which has garnered more than 1.3 billion hits on YouTube.

The brand also was beginning to expand internationally at that time, but the ride wasn’t always so smooth. Azqueta and Lieb launched Atlantico in 2009, during the recession. Both friends had attended Georgetown University together [Azqueta also earned an MBA from the University of Miami] and worked at Bacardi in marketing and brand management positions before taking the entrepreneurial plunge. Lieb now is based in Los Angeles; Azqueta, in Miami.

Starting a spirits business during a recession may not seem wise — let’s face it, rum is not really a necessity. “Everyone always says alcohol is recession-proof,” Azqueta (pictured below) said. “While that might be true, they don’t always drink the best quality stuff.” Still, he said, it wasn’t a bad time to launch as competitors were scaling back on marketing and expansion at that time. 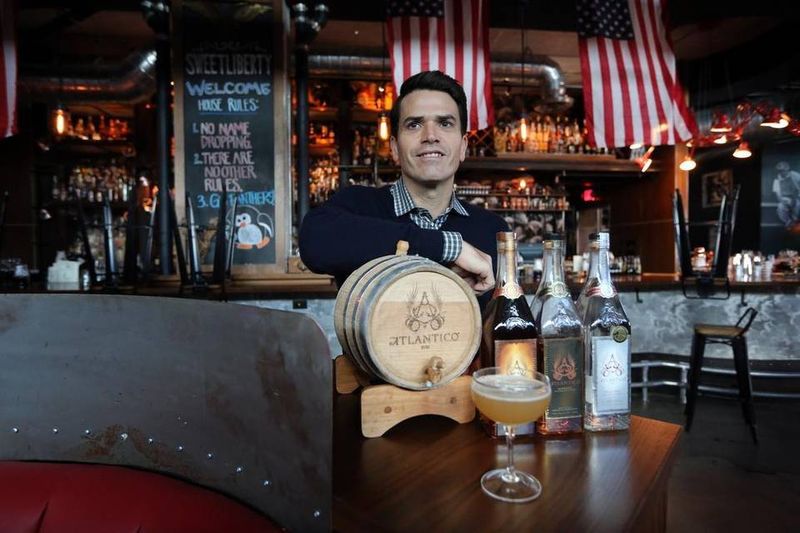 More important, the co-founders saw the craft beer boom gaining steam, and they believed craft spirits would not be far behind. Indeed, craft spirits bars, where bartenders focus on the craft of fine cocktail-making, were beginning to pop up in San Francisco, New York and elsewhere.

“We felt like there was an opportunity to develop a craft rum and participate in this craft cocktail movement,” Azqueta said. “The premium-ization of rum hasn’t caught up with the other categories.”

They looked at distilleries throughout the Caribbean and Venezuela and ended up in Dominican Republic. There they created Atlantico Private Cask with a third-generation Cuban master blender and started entering the premium sipping rum in spirits competitions. In the first two years, Atlantico won best-in-show at the London Rum Festival, the world’s largest rum competition. It also picked up best-of-show at the Berlin Rum Festival, and “Best Overall Brown Spirit” at the Wine & Spirits Wholesalers of America show. Azqueta and Lieb knew they had a good product but had to figure out how such as small company could break through.

From the start, Atlantico was never going to compete with the volume players like Bacardi but rather as a boutique brand; its batches are small and its bottles are hand numbered. Once Atlantico began producing commercially — it now has three styles, Private Cask, which retails for about $32, Reserva (about $27) and Platino (about $22) — it focused its distribution regionally, beginning with Miami, Los Angeles and New York.

Atlantico began hiring brand ambassadors in these markets, often bartenders in the cities’ craft spirits bars, to tell the story of the brand and bring awareness, teach cocktail-making, work at events, and work with its distributor, Miami-based Southern Wine & Spirits. Atlantico focuses its marketing by featuring it at community events, tastings and on menus. The company will be at the South Beach Wine & Food Festival that starts this week.

The past few years, Atlantico has been in an expansion mode. Atlantico is now in 16 countries, including Germany, Spain, the United Kingdom, Italy, Mexico and Australia. It has been picked up by some national accounts, such as the W, Seasons 52, Cosmopolitan Hotel, NOBU, MGM Properties, Caesars Entertainment Group and Norwegian Cruise Line.

But the independent “influencer” craft spirits bars — such as Broken Shaker, Sweet Liberty and Finka in the Miami area, Employees Only in New York, and Trick Dog in Los Angeles — are still a mainstay of Atlantico’s strategy. “Our strategy has not changed. It is to continue to focus on the influencers in the spirits community,” Azqueta said.

Broken Shaker in Miami Beach was one of Atlantico’s first accounts. Gabriel Orta, Broken Shaker’s co-founder, has been featuring Atlantico since the bar opened, for more than five years.

“I like that it is a boutique company, a hand-crafted company. I like the whole process how they make the rum, the master distiller used to work with Havana Club — they took the extra steps, and we love the packaging,” Orta said. “It’s a great rum and we love supporting it.”

Atlantico’s Caribbean-style rums “are sweet and approachable, and something that the locals favor,” said Alex Portela, beverage manager of Finka Table & Tap in West Kendall. Hand-shaken daiquiris or classic mojitos with Atlantico are fan favorites. So is the Old Cuban, similar to a mojito but topped with champagne, he said.

This craft spirits resurgence comes as the rum market as a whole has been flat. According to 2015 Nielsen research, the rum category was down nearly 1 percent; however, the ultra premium category where Atlantico competes was up 6.4 percent. Atlantico’s growth has been faster. The company said sales volume has grown by 50 percent over the past three years as Atlantico increased its distribution from being an East Coast brand to national and international distribution. It has grown to more than 2,500 accounts, its co-founders said, but they wouldn’t disclose revenues.

As Curt Carrillo, a bartender at Sweet Liberty on South Beach and an Atlantico brand ambassador, prepared a classic daiquiri, Aleco explains that he and other premium rum makers are trying to change the perception that rum, the second-largest spirits category behind vodka, is all about spring breaks and rum-and-cokes. Two of Atlantico’s brands — Reserva and Platina — are favored by cocktail makers. Some are using fine aged rum in place of whiskey in traditional whiskey classics such as the old-fashioned. “Rum is still a great value proposition compared to Scotch and whiskeys and tequilas,” Azqueta said.

Florida International University students have tried their hand at their own crafted creations using Atlantico rum, with a unique twist. Azqueta had lectured on rum production and came armed with samples, but Professor Barry Gump had another idea for those samples. In the beer making lab, the students created a blond beer with Atlantico Platino and a sweet stout with Atlantico Reserva. “They were marvelous, everyone enjoyed it,” Gump said, and he had some of it bottled.

“What our brand is trying to do is teach people how to drink better rum and lead the education that rum is a very complex spirit and just as high quality as a bourbon or scotch or cognac,” Azqueta said. “We are starting to see a renaissance of rum.”

Posted by Nancy Dahlberg 02/22/2016 at 10:23 AM in Early-stage companies, International, Latin America/Caribbean | Permalink