Honey vs. Vinegar: How are we luring and keeping the companies we want in Miami?

An interview with an upcoming transplant

Like any city -- especially a young one -- Miami has its charms, quirks, and flaws. The Kauffman Foundation listed South Florida as the country’s second area with most startup activity, but we remain unlisted in any major city ranking that tracks venture capital investment. Speaking recently at the South Florida Economic Summit, Richard Florida remarked that Miami ranks as one of the most tolerant metro areas in the country -- a welcoming landing pad to any who choose to make a start here -- but also commented that we rank 40th in technology and 138th in talent. For every milestone earned, there are other difficult goals to achieve and gaps to bridge.

Ultimately, our maturity as a city will be measured on a par by our ability to attract engaging companies, entrepreneurs, and investors from elsewhere as by our ability to nurture and pollinate our own. The former will be tracked by our ability to become not just a logistics/transit hub for the region;  in order to cement Miami as a content and growth destination, we must do more than lure interesting projects and people with the promise of tight networks, a fantastic quality of life, and jovial aspirations. It is a fascinating and complex challenge that requires the maneuvering of systemic levers, and we can start by taking a more nuanced look at the business both seeking/leaving and growing/shrinking in our city in 2016.

Below, we take a closer look at Balloon Group, an emerging company planning its expansion to Miami from Buenos Aires later this year. We spoke with Santiago Bibiloni (pictured here), the venture’s Founder and CEO. 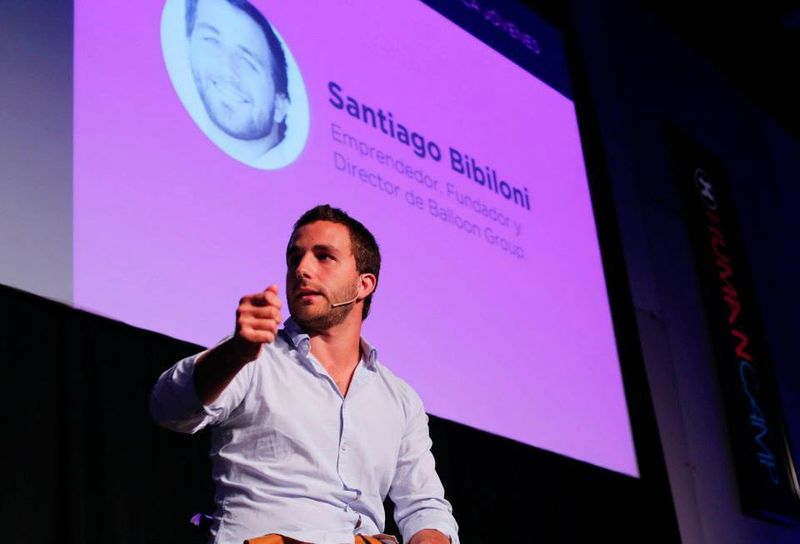 Tell us about Balloon Group. How was the company started? How do you see its future growth and development?

Fundamentally, Balloon Group focuses on development (eCommerce and software), and performance-oriented digital marketing (sales, user acquisition, etc), but we also offer consulting services and a global network of contacts, which allows our clients/entrepreneurs to receive legal, accounting, and human resources services first-hand from specialists in these fields. We started the company with no capital investment, and today, 36 after months after launching, we have 400 clients in over 12 countries.

When is Balloon coming to Miami and why?

Balloon Group will take off in Miami in late 2016. We are launching in Miami because our vision was, is, and will continue to be to design the future. We aspire to become the top company working to strengthen technology and innovation-centered startups. And we believe that launching aggressively in Miami will position us to infiltrate northern markets better and faster. San Francisco, New York, Miami, Austin, and Mexico City -- these are the hard hitters in the Americas. We will take on Brazil at a later stage.

We’re looking to access startups that have the potential to become the next unicorns, but lack the resources to develop and scale their businesses. When it comes to technology and marketing, we offer “know how,”creativity, quality, and reasonable pricing for a company operating in Latin America.

We also have our own project incubator and an investment fund for venture capital, so we are also in search for how to support start-ups in different ways.

From the perspective of a Latin American entrepreneur, what advantages does Miami have?

Miami was and is considered a fundamental and strategic platform to have operations both in Latin America and the US, and a few years ago it began to be an interesting market within itself, as far as start-ups are concerned. For Argentines and/or Latin Americans, it has many advantages: a stable economy, access to capital, public policies in favor of entrepreneurship, innovation and technology, free market and competition, safety and the legitimacy of government institutions, with a similar language and culture.

In light of this perspective, what can Miami do better to become a true “hub” for the region?

Miami is an emerging market, and because it lacks experience, it should try to both develop and import value-adds to increase venture capital investment and make it as efficient as possible. This could involve importing fund managers with expertise and facilitating access to work opportunities for high-potential foreign entrepreneurs.

You helped create the Argentine Association of Entrepreneurs (ASEA); tell us a little bit about this entity, its objectives and its development in Argentina’s economic and political framework. What perspective does this experience give you on the move to Miami?

ASEA aims to turn Argentina into an “entrepreneurial nation,” namely to ensure that we are a better country for enterprises. This involves improving both the macro and micro contexts for entrepreneurs: better public policies, favourable tax benefits, limited bureaucracy, and added mentoring, among other things. A bill sponsored by ASEA that outlines these points is already on the new government’s agenda.

Organizations like Endeavor have talked at length about the “Argentine Model.” What do you think Miami can learn from the Argentine case?

For years, Argentines have dealt with 30% annual inflation, taxes and social security contributions equivalent to 40% of our revenues, restrictions on exports, and many other obstacles.

And precisely because we have these shortcomings, we have developed our greatest asset: our waistlines. We are able to adapt to changing contexts and deal with competing priorities. That is an essential lesson in entrepreneurship.

The government and many Argentine institutions are understanding the need to work as an ecosystem and not, as my friend Mariano Mayer (current National Secretary for Entrepreneurs and Small & Medium Enterprises) would say, an “ego-system.” This is why we are developing an interesting model based on training, community, incubation acceleration and financing for entrepreneurs. In turn, the government is co-investing with private entities in high-potential startups. There is plenty to do and we are doing well.

Natalia Martinez-Kalinina is the General Manager of CIC Miami and the Founder of Awesome Foundation MIAMI.