« Seen and heard at Blacktech Week: Two views of diversity (or lack thereof) in tech | Main | Ultimate Software VP shares advice at Sup-X: ‘We were a startup, too’ »

Miami Mini Maker Faire: Where all ages come out to learn, play 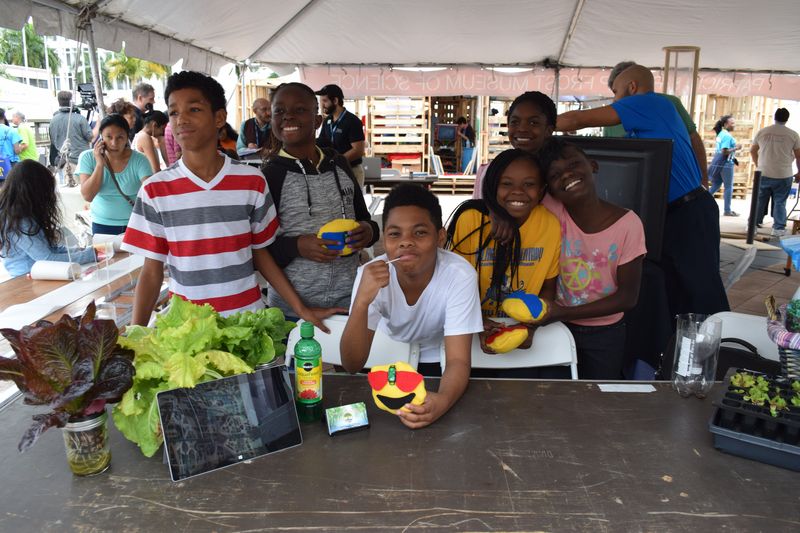 Gabriel Streeter, Shekeyna Walker, Amauri Stratford, Kenya Burnes, Kaniya Smith, Jennifer Jean-Jacques have been working with aquaponics in their school and participated in a booth at the Miami Mini Maker Faire. Photo by Steve Viti 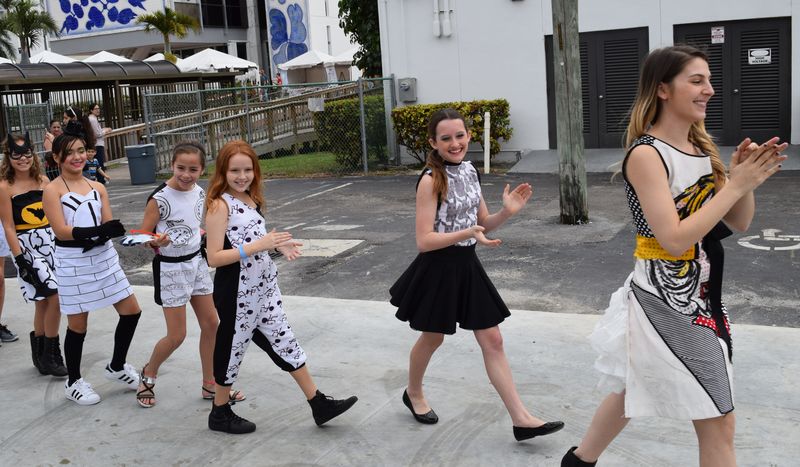 Under a big white canopy at the center of the Miami Mini Maker Faire, kids drew animations frame by frame, which could be turned into their own movie. Another group of youngsters was learning about growing lettuce with aquaponics. At another set of tables, some were trying their hand at sewing, while others were contributing “wishes” for an art piece.

This Patricia and Phillip Frost Museum of Science display was just one of many such canopies, each becoming magnets for makers of all ages at the Maker Faire, which opened Saturday and continues through Sunday. More than 3,000 tickets have been sold to the fair, which turned the YoungArts campus in Miami into a festival-like celebration of the “maker movement,” or the do-it-yourselfers among us in technology, industrial arts, science, arts and crafts, music and more.

“You’d be surprised how excited kids get about aquaponics — sometimes a little too excited, like trying to skip class to work on their projects,” said Marc Gauthier, a math-science coach at Holmes Elementary who also owns Fruit of Life Organics. He was demonstrating to a family how students at Holmes grow large healthy heads of lettuce in just 3 1/2 weeks, with fish and their environment providing the nutrients and water to grow the vegetables.

The nearby StarBot display was also a huge draw, with kids surrounding a pen and directing their robots within it. Nola Garcia, president of StarBot, said her organization works with 120 youngsters from 47 different schools and offers a 34-week introduction to engineering series of interactive projects. For finishing the series, the reward is a sleepover under a Saturn 5 Rocket at Cape Canaveral.

“These kids are amazing, they are so fertile when you put them in the right environment where anything is possible,” said Garcia, whose organization partners with Frost Science, Breakthrough Miami and the Children’s Trust. “I tell them the most important question to ask is ‘what if?’<TH>”

Saturday afternoon about 40 students, ages 6 to 15, of DesignLab Miami turned a stage into a fashion runway. But the fashions they were wearing were their own creations, from concept to the final stitches.

The theme of the fashion show was cartoon animation, and like all the Design Lab students, friends Isa Burguera, 12, and Rowan Windham Burke, 13, drew their own characters on their fashions. “I’m a fan of Project Runway and I’m a dancer. I am working on a [fashion] line for dancers,” said Rowan, after the show.

That mix of passion and innovation was on display at booth after booth — there was even an ice cream maker powered by a “human hamster wheel” — and there was plenty for adults to enjoy, including 3D printing demonstrations and mini-talks on topics from “design thinking” to drones. Craig A. Hamilton was representing Waking Hearts, a group of artists in Wynwood that “create art that soothes the soul,” he said. His group’s pop-up shop at the Faire was a way to bring art to the community.

Ric Herrero is the founder of MIAMade, the organization producing the fair with partners including the Knight Foundation. He said the show — just like the maker community — has grown so much since the first event in 2013, then held in the LAB Miami in Wynwood, that next year the Miami Mini Maker Faire might finally lose the word “Mini.” Now it’s a two-day festival with live music, maker talks and food trucks. For the first time the organization flew in 11 makers from Cuba for the event; the artists are members of Fabrica de Arte Cubano, an acclaimed mixed-use creative space in Havana. Fabrica de Arte Cubano co-founder X Alonso, a pioneer of Cuba’s hip-hop and afro-rock scene, was scheduled to perform at the fair Saturday evening.

Indeed, this year four local makerspaces participated as well as a number of startups, nonprofits, artist groups and companies such as Microsoft, Herrero said. No one could miss the Moonlighter Makerspace’s area with an artful room made from PVC piping beckoning folks to come inside. Nearby, several startups and nonprofits affiliated with the Moonlighter space displayed their creations, some of which were for sale.

Technologist Mario Cruz was checking out the Maker Faire on Saturday, sans kids. “Last time my kids had a great time but I didn’t get to see what I wanted to see. So this year I decided to see it first today, and bring them tomorrow.”

The event continues from 10 a.m. to 5 p.m. Sunday at the National YoungArts Foundation Campus, 2100 Biscayne Blvd., Miami. Fair admission is $12 at makerfairemiami.com and at the door; kids under 5 are free. 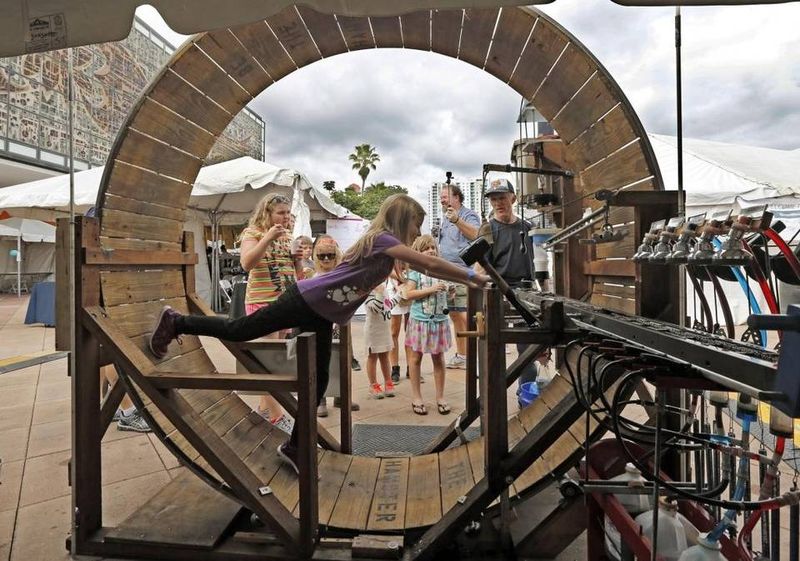 Emilee McDonald, 9, walks inside the "Be the Hamster" wheel as she makes a flavored frozen ice cone during the Miami Mini Maker Faire at YoungArts Plaza on Saturday, February 20, 2016. AL DIAZ adiaz@miamiherald.com 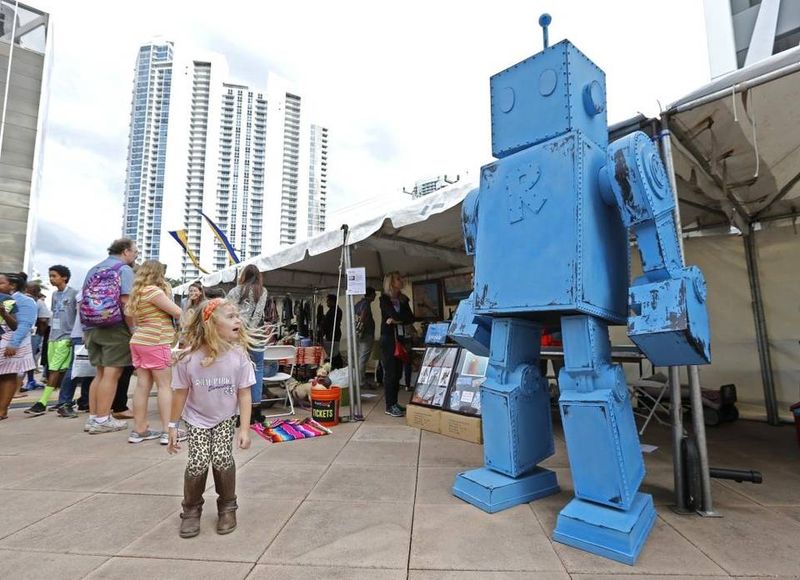 Abby Rose, 6, jumps next to a tall blue robot on display during the Miami Mini Maker Faire at YoungArts Plaza on Saturday, February 20, 2016. AL DIAZ adiaz@miamiherald.com