Ultimate Software VP shares advice at Sup-X: ‘We were a startup, too’ 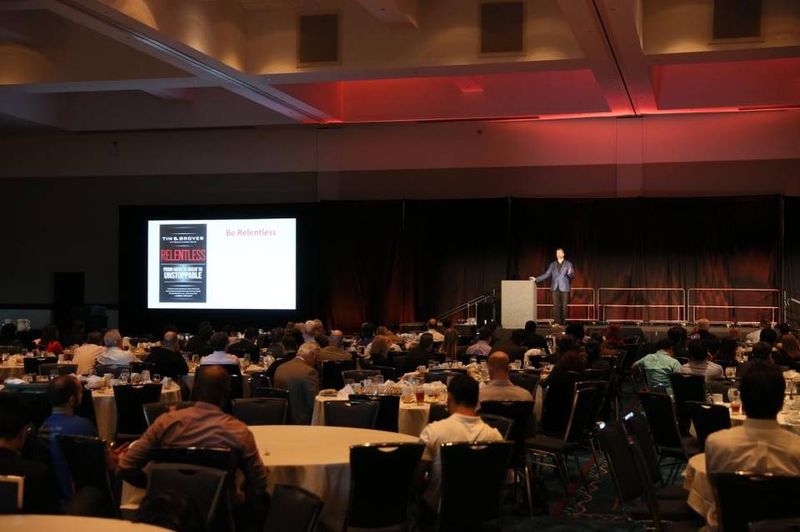 Advice was coming from all sides last week, with a packed calendar of entrepreneurship conferences and events that brought in more than 100 speakers, many from Silicon Valley, New York and other parts of the U.S. and world. But sometimes the best advice comes from our own backyard.

Jim Jensen, Ultimate Software’s vice president for strategic alliances, reminded the audience at Sup-X: The Startup Expo last week that the company, which now has 3,000+ employees and brings in more than $600 million in revenue, was once a startup too — beginning in four cubicles off Stirling Road 25 years ago. Those were the days when portable computers meant screwing door handles on the tops of the desktop computers so they could be lugged home, he said.

But those 120-hour workweeks that included sleeping under desks in the early days have paid off. Today, Weston-based Ultimate Software, with 25 million users at 3,200 companies, has been largely credited with pioneering human capital management in the cloud — HR benefits, payroll, onboarding talent and the like. This year Fortune named it the No. 1 technology company to work for in America.

Jensen was employee No. 33 when he joined Ultimate Software 21 years ago, hired to run the development team creating the next products companies would use to run their companies. “It’s been an incredible ride,” he told the Sup-X audience Wednesday in a Broward County Convention Center ballroom, where he was a keynote speaker. He credits the success in part to the company culture so important to founder and CEO Scott Scherr.

Here is some of the advice he shared.

It’s all about the team and teamwork. You can’t miss the basketball court and “championship banners” for key milestones in the atrium of its Weston headquarters.

“Scott’s model is built on trust. Ultimate takes care of all of its employees,” Jensen said. Every employee gets full healthcare, matching 401k and stock, and the company has never had a layoff, even during the worst of times. “Scott’s model was, ‘if I take care of my employees, and they are crazy happy about working at Ultimate, then that is going to drive satisfaction with the customer. … We have 3,000 employees; Scott looks at it like we have 3,000 families.”

He also said Scherr was able to build a great team because he wasn’t afraid to hire people smarter than him to add to the talent base and encourages people to think entrepreneurially. After each major product release, usually two or three times a year, Ultimate holds a competition and gives every team a chunk of time to come up with anything they want. Some of these innovations have led to new product features.

Do one thing exceptionally well. Most of Ultimate’s competitors offer a broader array of solutions, and human capital management is just one component of what they do.

“All we do is HCM — we are never going to change,” Jensen said. “The idea is to have a crazy focus on what you are doing. If you don’t have it, you’re like a ship without a rudder — you are blowing all over the place.”

Be able to convey your vision and mission simply. Most companies can explain what they do and how they do it, but they have a harder time explaining why they do it, Jensen said.

“When I look at your booth, I want to know what you do right away,” he told the entrepreneurs in the room, many of whom had exhibitor booths at the conference. “Come up with a one- to three-word tag line of what you do. When you think of Apple, it’s ‘Think Different.’ Ours is ‘People First.’ Everything we do is all about People First.”

Giving an example: No sales talk is allowed at its annual user conference for its customers. “The purpose is to love on, educate and collaborate with our customers and make sure they understand we are in this together … Our customer retention rate (97 percent) is the highest in the industry … We live and die by that number.”

Thunderbolts are inevitable; it’s about how you handle them. Ultimate went public in 1998 and, like most tech companies, got hit hard in the dot-bomb of the early 2000s. It had an on-premise solution a company would license and install, but with losses mounting to $4 million a quarter, it pivoted in 2002 to a Software as a Service model, with a monthly fee rather than buying expensive software upfront. “We are the only public SaaS company right now that is profitable. We’ve been profitable since 2004.”

Control your own destiny. Be careful with partnerships because they are a reflection of you.

Jensen’s recommended reading: RReadelentless, by Tim Grover (every new employee at Ultimate gets this book); The Winner Within, by Pat Riley; Start with Why, by Simon Sinek; Good to Great, by Jim Collins; Zero to One, by Peter Thiel; and Drive, by Daniel Pink.

Celebrate your championships: The aforementioned banners are real, but as soon as Ultimate hits one, it is on to the next goal. The most recent banner was for 2015, hitting $600 million in revenue.

What’s the championship goal for 2018? $1 billion in revenue. Not bad for a company that started out in four cubicles.