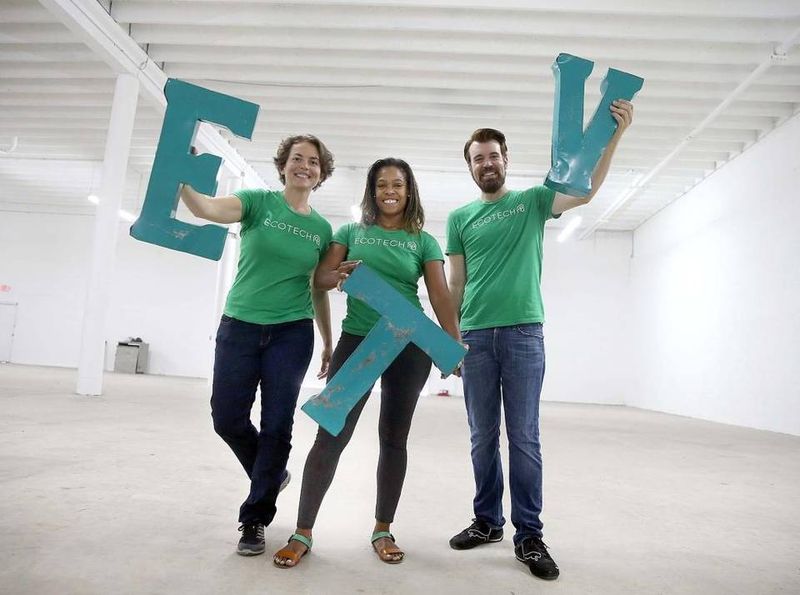 When Pandwe Gibson set out to build EcoTech Visions, an incubator for green manufacturing businesses, she had no team, no funding and no space. Three years ago it was only a big vision that lived on her iPad, which she shared with anyone she could get to listen.

What was the vision? EcoTech would help “ecopreneurs” in its incubator launch and grow, including connecting them with grants and other resources. EcoTech would also hold programming such as coding courses, green internship programs and fellowships to help prepare the workforce in underserved communities to transition from blue collar to “green collar” jobs.

Gibson wasted no time bringing her big idea to life.

By the end of 2014, and after knocking on many doors and winning initial Miami-Dade County and Community Redevelopment Agency funding, Gibson moved EcoTech into its first location, a small space west of Interstate 95 with communal office space and a community garden, and with a handful of incubator companies she had already begun working with. Although the building had no space for manufacturing, a key goal of Gibson’s, it served as a minimal viable product. A few months later, EcoTech secured some additional office and classroom space in another Liberty City building, which allowed the company to expand its programming. The EcoTech team began forming, and EcoTech began attracting more green companies.

Last month, EcoTech Visions began partially moving into its new Miami headquarters space it leased to own at 670 NW 113th St., in the newly designated “green corridor.” Upon buildout, plans call for the building to provide 24,000 to 25,000 square feet of multilevel co-working space, offices, event space, maker space and manufacturing facilities. EcoTech will also use its Liberty City space during buildout.

EcoTech Visions recently announced the launch of Digital Citizen, a technology boot camp that aims to provide real-world technology programs and entrepreneurship training to local underserved communities, funded by $200,000 from the Knight Foundation. The first cohort will begin June 20 and will run for eight weeks in the evenings at D.A. Dorsey Technical College in Liberty City. Applications for the boot camp are being accepted at etvfoundation.org/digitalcitizen.

“This program is desperately needed not only to fill the tech staffing gap but also to combat the economic hardships and growing income gap in inner-city Miami,” Gibson, CEO "of EcoTech, said in announcing the launch and funding. “We all succeed when the best and most diverse solutions are brought to the table.”

Since its founding, EcoTech has created 15 new jobs and more than 300 students graduated from EcoTech Visions workshops and certification programs, Gibson said. It has secured $10,000 start"up prototyping grants for nine incubator companies and assisted in securing seed loans for three of its ecopreneurs, Gibson said. It was named 2016 Entrepreneur of the Year by the Beacon Council, among other honors.

By the end of the year, Gibson hopes to see buildout of its headquarters get under way and be completed in one year. Plans include an urban vertical garden across the entire front of the warehouse-style building, space for creating prototypes and light manufacturing as well as co-working and a rooftop cafe.

Appropriately, the building is planned to be entirely powered by solar energy.

“Our goal is to have a net-zero-energy building,” said Tamara Wendt, EcoTech’s director of sales and manufacturing, explaining that there is currently only one other much smaller net-zero building in Miami. “Presently, we have on-site office space and will be holding events here. We expect to have our injection-molding equipment installed by early July and will move into production, warehousing and fulfillment.”

The Miami Herald toured the new EcoTech location last month and sat down with Pandwe Gibson to discuss EcoTech Visions and what’s ahead for the company.

Q: What’s your mission for EcoTech?

A: Our mission is to create opportunities for businesses to grow and to bring green manufacturing jobs to Miami.

A: In the next two years, to have at least five breakout companies. That sounds very ambitious, doesn’t it? But we already have some companies pursuing multimillion-dollar contracts, and when we start seeing the production actually occurring from here, that is very exciting.

The first year [in this building], we will be in massive construction, but we are starting with injection molding and I think we can make a lot of progress in the beginning with that one vertical. We provide the equipment, and there are a lot of businesses that have different molds and prototypes we can help. We plan to have two different machines.

Q: How are you funding all this?

A: We have private funding and public funding. We just completed a seed round of half a million dollars. We have public funding from Miami-Dade County and the CRA totaling about half a million and are pursuing more grants from the county. We recently found out we received a grant from the Knight Foundation. It’s a combination.

Q: Is EcoTech a for-profit or a nonprofit?

A: We have two arms. The for-profit is the maker space, the physical space that you are in, and the services associated with the production equipment. … The nonprofit really focuses on helping to facilitate training, the programs we administer.

Q: Tell me about a few of your incubator companies.

A: Geeks Global is an internet services provider and sustainability-focused technology consultant. Darrell Russell and his team help greenify businesses by using technology like LED lighting, windmill-powered Wi-Fi towers and other innovations. Make The Homeless Smile Miami is an organization started and led by powerhouse community activist Valencia Gunder. They transition homeless Miami residents off the streets and into self-sustained lives. HBCNS LLC, run by Dawn Davis, is a distributor of water-based, biodegradable, protective coatings including the nation’s only non-slip coating. It’s main product is called Strong Seal. (All three entrepreneurs are pictured below with Gibson)

Earthware, led by Michael Caballero, is a producer of compostable cutlery, cups and containers for a better world. The company is committed to the restoration and preservation of our planet by replacing landfill-destined products with 100 percent compostable, tree-free products. 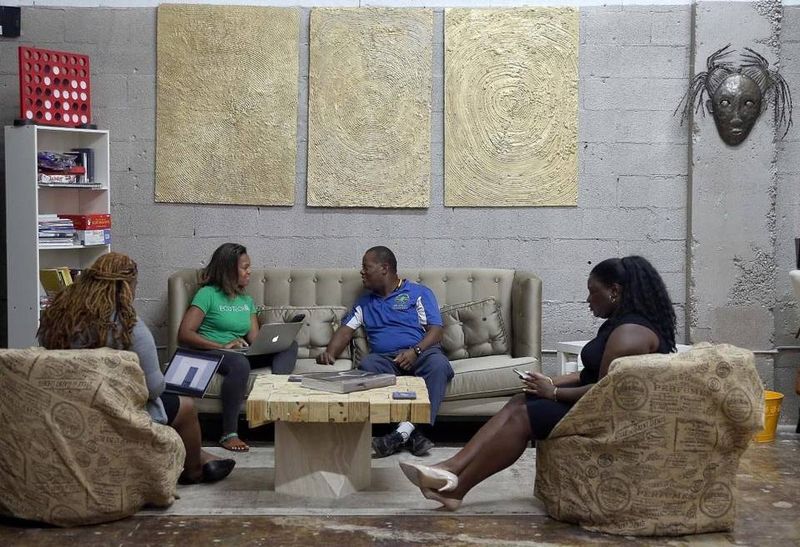 Q: What do you do for member companies?

Q: Explain what the “green corridor” designation is and what it can do for the neighborhood where EcoTech is?

A: The Green Corridor was created by proclamation by the Miami-Dade County Commission and stretches along Northwest Seventh Avenue from 79th Street to 119th Street. It is the first green corridor of its kind in the United States created with the purpose of establishing a citywide, countywide, statewide and regional hub of sustainable and environmentally friendly businesses. The Green Corridor and EcoTech Visions promote economic opportunity for the community where they sit and far beyond.

Q: Where do you see EcoTech in five years?

A: In five years, we want to start multiplying. We want to be in other communities, such as Los Angeles. When you look at the two markets, Miami and L.A., there are a lot of similarities. We are already forging relationships there. California is probably the largest green-tech community in the country. Connecting the two will help infuse vitality and innovation into Miami and help move us as a country into a really great space in green technology.

Q: What is your vision for the vertical garden covering the front of the building?

A: Ted Caplow, of CappSci and Miami Science Barge, is designing a game-changing vertical farm based on work by his company, BrightFarms Inc., which creates hydroponic farms for Whole Foods amongst other clients. The vertical farm will be a hydroponic system to grow organic produce inside a glass and screened-in enclosure on the façade of EcoTech Visions’ new building located at 670 NW 113th St. Installation and ongoing maintenance and production will be managed by Urban Green Works working with marginalized resources including women recently exiting incarceration. In addition, an aquaponics system will be incorporated by Fruit of Life Organics, one of our incubator companies, to grow organic fish and produce in one system that recreates the natural water cycle.

Q: There are even plans for a rooftop café?

A: Yes, and we will serve food from our vertical garden.

Q: What’s next for EcoTech?

A: We’re taking applications to fill out our pipeline of companies, educating people on the opportunities in green technology, and educating entrepreneurs on what is available in terms of funding so they can succeed by being clean and green.

Read more entrepreneurship Q&As on this blog by going to the Q&A category. 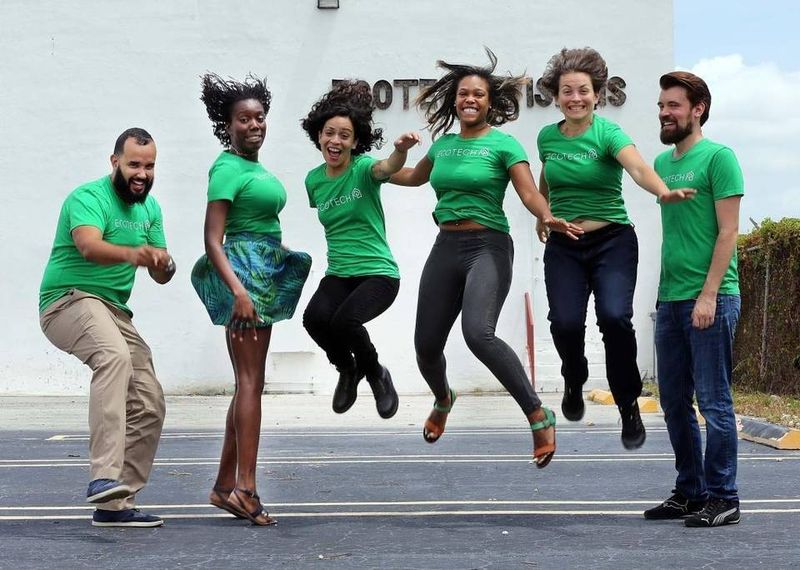