« Wyncode outgrows The LAB, will open its own campus Jan.8 | Main | Argentina to Miami, a bridge worth building (Part 3)   » 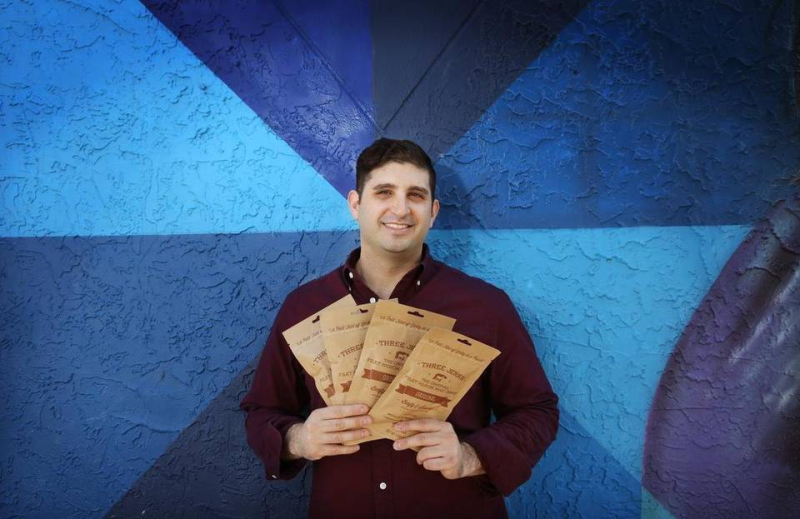 Three Jerks Jerky created a line of filet mignon beef jerky that is all natural and scored a Daymond John investment on Shark Tank. Now the startup has expanded, even offering burgers.

Concept: Why should something as incredible as filet mignon be relegated to special occasions and celebrations? Friends Jordan Barrocas and Daniel Fogelson didn’t think so, so they formed Three Jerks Jerky and created a beef jerky that is and all natural and that fans say is melt-in-your-mouth delicious.

Story: After being disappointed with all of the jerky available — it was either too tough to eat or loaded with so many chemicals it was scary — Barrocas and Fogelson decided to make their own. “We didn’t want to make regular old jerky and felt that we needed something special. Filet mignon it was,” said Barrocas, who earned an MBA from the University of Miami and worked in the footwear industry before taking the entrepreneurial plunge.

After going door to door to stores with their samples they caught their first big break. “We aired on ABC’s ‘Shark Tank’ in October 2015 and partnered with Daymond John. The exposure from the show produced an overnight growth spurt and we expanded 600 percent in two months,” said Barrocas said.

That short growth spurt brought more than a million dollars in sales but also significant challenges: They couldn’t supply the demand and maintain their production standards. “Our production partners were at max capacity and we weren’t coming close to filling our orders on time,” Barrocas said. To keep the wheels from falling off and alleviate growing pains, Daymond John introduced Three Jerks to Rastelli Foods Group, and they partnered up. “Rastelli quickly organized a supply chain for our filet mignon, improving price and reliability. They took control of managing our production schedules and sources new manufacturers for us,” Barrocas said. “Daniel and myself could get back to focusing on our brand and selling our jerky — essentially back to the Jerks we once were.”

Three Jerks Jerky is expecting to close the year up another 500 percent over last year, due to growth in the retail business, including expanding into Publix, Hy-Vee and Meijer grocery chains. Three Jerks offers five core filet mignon jerky flavors: Original (the best seller by far); Memphis BBQ; Chipotle Adobo; Maple Bourbon Churro; and Hamburger (yep, it tastes like a burger). A two-ounce pack (two servings) is $8.99 on threejerksjerky.com.

Next year, a new flavor will join the lineup. “It’s a teriyaki flavor that we developed in partnership with the company Soy Vay. They make the most amazing teriyaki sauce and I have been purchasing it for as long as I can remember. We figured the best teriyaki sauce and the best jerky were a match made in heaven,” said Barrocas, who enjoys cooking.

Beyond Jerky: The partnership with Rastelli has also helped the company introduce two burger varieties this past August: 100 percent Filet Mignon and the first-ever-to-market Pork Belly Blend (60 percent beef filet, 40 percent pork), Barrocas said. “Just like our jerky, the burgers are made from only the most premium cuts and contain no preservatives or artificial ingredients.”

No. of employees: Five

Financing: Primarily self-funded. Launched on Kickstarter and raised $40,000. Appeared on “Shark Tank” in 2015 and secured a deal with Daymond John, resulting in an investment of $100,000.

Recent milestones: Appeared on Shark Tank in October 2015. Secured an investment deal with Daymond John and grew the business 650 percent in 2015. Have since joint ventured with Daymond John and Rastelli Foods Group to create a partnership with strengthened supply chain and operations. Consequently, have lowered unit costs and are on pace to grow an additional 250 percent in 2016. Three Jerks has broken through in major grocery retail in the fourth quarter with Publix, Michigan-based Meijer and Iowa-based Hy-Vee.

How a trip to the Congo inspired a skincare startup

One juicy story: Caribe Exotic offers tastes of the tropics