« The LAB Miami to kick off 2017 with 3 events, including new Product Council and GrowthHacking series | Main | Join CIC Miami and The New Tropic for MiamiLand Jan. 21 » 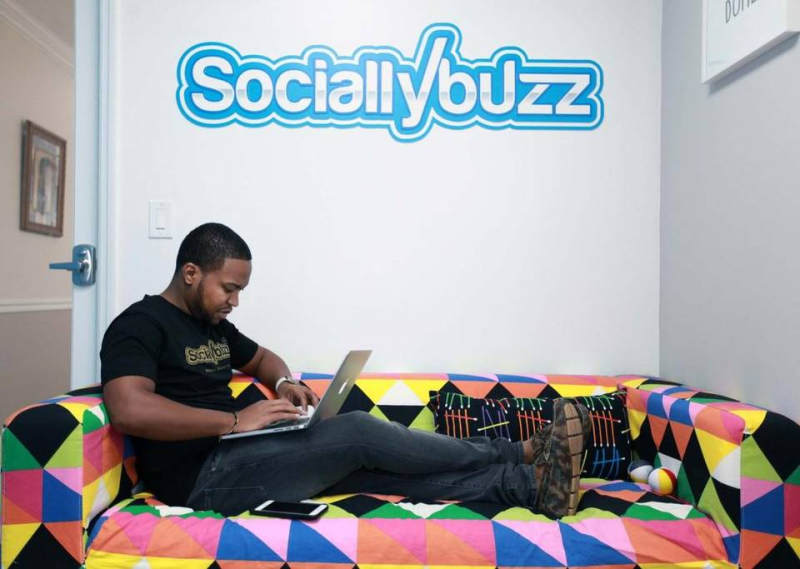 Story: Andre Kay bootstrapped Sociallybuzz from a small social media “do it for you” company to a nationally recognized social media agency and software company. But Sociallybuzz today is not anything like what it was conceived to be seven years ago. “It was supposed to be a social media influencer platform. The idea was to connect businesses with celebrities. I hired an outside engineer to assist me with building out the platform. After three months, he disappeared with my money and my codes. I was down thousands of dollars and nothing to show for it,” Kay said. “I was stuck at a two-way street deciding to quit or keep going.”

He kept going but changed the course of Sociallybuzz into a human-powered social media and tech agency. “That essentially became my greatest decision,” said Kay, who had co-founded and helped run Go Media Marketing, an outdoor marketing company, and was in bank management prior to launching Sociallybuzz. “I eventually grew the company from $0 to over $5 million with no outside investments. My ‘why’ for running this company is knowing that something that we’re doing at Sociallybuzz is helping other businesses grow. When they grow, the owners can support their families, hire more people, and those people can also support their families. That is what drives us to do what we do.”

There are many aspects to running a business that are never taught in school. So Kay applied for and was selected to be part of the three-month Goldman Sachs 10,000 Small Businesses at Miami Dade College in 2014 to get a better grounding in all aspects of running a small business – particularly the human resources side of the company. “I knew hiring the right people would be essential to growing the company,” said Kay, who is 34 and a proud graduate of the program. In 2015, Kay, who has won several entrepreneurship awards, launched the Sociallybuzz giveback program, which included pledging 1 percent of time, talent and treasures to the community. That pledge included donating over 200 turkeys and toys to families in need.

Growth often springs from more focus on the core business. In early 2016, Kay made the difficult decision of closing down the app side of his business, because it wasn’t gaining the traction the company needed to self-fund it, and went back to investing time and resources in growing Sociallybuzz’s core business model. Because of that change, company revenues grew 100 percent in 2016, said Kay, who was born in Kingston, Jamaica, and moved to South Florida when he was 16

“We’re now executing on our biggest change at the company. We’re adding content development, creative and paid media as core services, to complement our social media managed services and will be accepting up to 50 carefully selected new clients per year,” Kay said. “We want to continue to do amazing work to help our clients grow, but we can only do that if the businesses we’re working with also appreciate and understand the true value of social media. We’ll be launching the new website this month.”

Biggest startup challenge: Not understanding early on the true value of having the right people to help you run the company, whether they are at the executive level or at the day-to-day, getting your hands dirty level.

Next steps: To grow the company to $10 million.

Strategy for next steps: To continue to adapt to the constant change in social and digital media while expanding the knowledge of Sociallybuzz’s core team and hiring more talent.

Mentor’s view: “Many entrepreneurs do not have the discipline or the flexibility to put sales and marketing on hold for several months while prioritizing putting the right staff and back office operations in place. Andre had that discipline, and once he made corrections to the fundamentals that were not working smoothly, revenues and profits began to scale,” said John Hall, executive director of the local 10,000 Small Businesses program. Going forward, Hall’s advice for Kay is “to continue to push revenues in his current growing niches while pursuing ‘innovative differentiation’ in services and product lines that are not easily replicable, possibly with a tech component.”

How a trip to the Congo inspired a skincare startup

One juicy story: Caribe Exotic offers tastes of the tropics