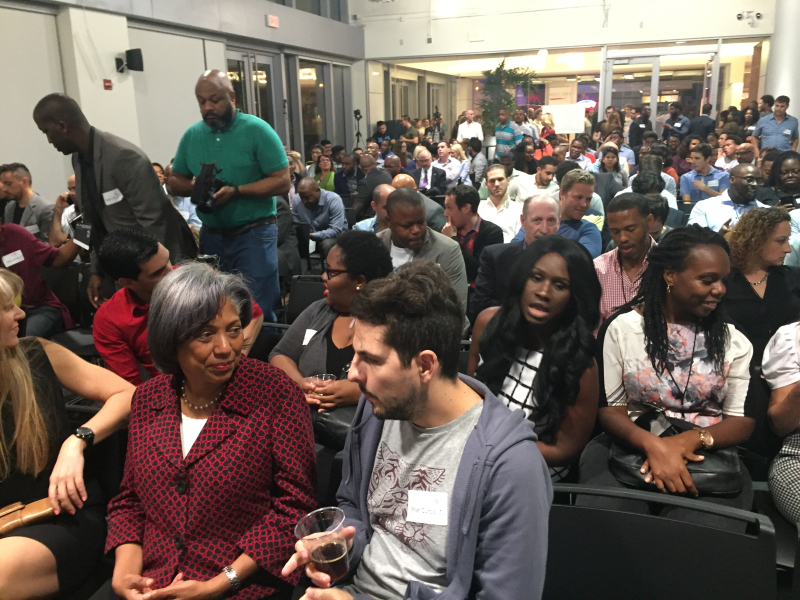 A standing-room-only crowd piles in to hear Michael Seibel of Y-Combinator, Sarah Kunst of Proday and Angela Benton of NewME (shown below) open Blacktech Weekend at Venture Café in CIC Miami Thursday. More photos at bottom of story. Photos by Nancy Dahlberg 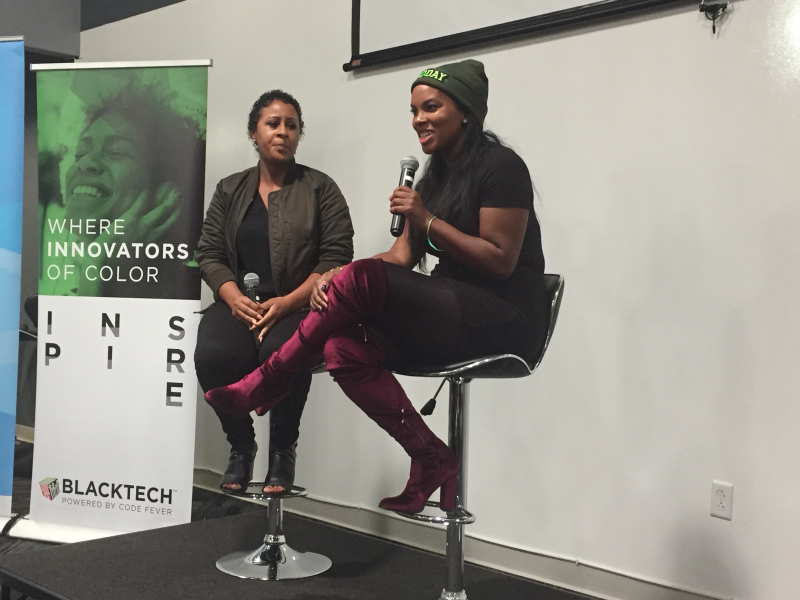 It was billed as an opportunity to “break bread and make bread.” Blacktech Weekend was certainly that and a whole lot more.

Black startup founders, investors, techies and community builders flew in from Silicon Valley and all over the U.S. to meet and mingle with Miami’s entrepreneurship community for talks, panel discussions, meals, bus tours, community outreach activities and parties during the event Thursday through Saturday at various locations around the city. On the main stage at the Little Haiti Cultural Center and the evening before at CIC Miami, the talk was capital raising, getting the message out, social impact and building inclusive ecosystems.

I’ve been to a lot of conferences, and the speakers usually bolt after their talks. Not at Blacktech Weekend. Each talk on stage – heavy with personal stories and advice -- came with substantial Q&A time, and the conversations continued after, in the halls, over lunch, on the buses, at the bars. Many of the speakers stayed for the entire conference.

That’s by design, said Blacktech Weekend’s founders Felecia Hatcher and Derick Pearson, who also co-founded Code Fever, an organization for inclusive coding and entrepreneurial education. The speakers list was curated and the event put together so that attendees received many opportunities to meet – and be inspired by – some of the luminaries of the industry. These are the stories that don’t get told, they said. And along the way, attendees also get their burning questions answered and, most importantly, begin building a relationship with potential investors, mentors and strategic partners.

But let’s get down to a few highlights:

“This is not a game where everyone wins. … You need to know that’s the world you are going into. I tell founders all the time, 99.9 percent chance of failure,” Michael Seibel, CEO of Silicon Valley’s Y-Combinator, one of the world’s preeminent startup accelerators, and co-founder of Justin.TV/Twitch and Socialcam, told the standing-room-only opening night crowd at Venture Café at CIC. He said in the last two years YC has funded more than 100 black and Hispanic founders.

More truths he shared: “I’ve seen every idea. Ideas are irrelevant. You are judged on execution and the number 1 way to prove that you can execute is by executing.”

Entrepreneurs succeed in fund-raising by developing leverage – by getting people to fear them as opposed to love them, he said. How to do that: Build and launch something without money. Have the right team, and there better be engineers on it, he said. And in the beginning, it’s ok if just a small group of people love your product.

“Good founders can give me a picture of the future that I can believe,” Seibel said. “And the second that I believe your version of the future, you have leverage. … I’m a little bit afraid if I don’t get behind this.”

Startups are your opportunity to change the world, but make sure you are working on a problem you really care about, he advised.

Sara Kunst, founder of Proday, and Angela Benton, founder of NewME, the first accelerator for entrepreneurs of color, got even more real: “You have to go above and beyond, and that’s the reality we are in,” said Benton, now a Miami resident who is looking to expand programming here.

The stats are sobering: Under-represented minorities in tech number in the low- to mid- single-digit percentages, and it’s about the same for senior leadership, according to statistics released last year at SXSW. Only 1 percent of VCs are black and about 1 percent of VC money goes to black founders.

Women of color who have been funded are an especially rare breed. Kunst said there are just 13 black women founders in the nation have raised a million dollars or more in venture capital.

For seed funding, if you don’t know a lot of rich people, Kunst recommends applying to accelerators, even those in obscure places such as the Midwest, because they generally provide funding. F6s.com has a good list of accelerators, she said.

Richard Kerby is vice president of Venrock, an early stage VC fund that invests in tech and healthcare companies, writing checks from $500K to $10 million. He said he listens to the founder’s vision, and then thinks, if that team can execute the vision, how will the world be impacted? If he likes the answer to that, he dives deeper into more traditional venture measures around team and product.

“As for team, I look less at your education background and look more to understand your raw intellect. I look less on your experience and more at your great market knowledge of your category. In product, I look at the value you provide to your end customer,” he said during the conference on Friday at the Little Haiti Cultural Center. For consumer products, engagement and retention is super important, he said.

Chris Christmas, founder of KeepLivin, reminded the audience that’s it’s not all about the exit.

“Everything is not about raising money and selling … Stay in your communities and grow jobs … Let’s be about economic development in our communities.”

KeepLivin  is a digital health company that aims to increase health equity in communities where health disparities exist. “Our job is to bring digital technology to the community and we are starting in barbershops, salons and churches,” he said. “We go to the streets; we meet the customers where they are at.”

For example, KeepLivin takes telemedicine to churches and to families with members in the Caribbean, so they can be seen by a board-certified physician.

KeepLivin was part of the first cohort of Startupbootcamp Digital Health in Miami, and Christmas said he found Miami to be a perfect ecosystem to grow keeplivin.org.

“Innovation is a social process, and it is one that it is fueled by conversation, collaboration, storytelling and it thrives when everybody’s included,” said Leigh-Ann Buchanan, executive director of Venture Café Miami, who led a panel discussion about inclusive ecosystems.

Leslie Miley, a returning Blacktech Week speaker who has held engineering leadership roles at Slack, Twitter, Apple and Google, said the onus is on the black community to get the positive stories out on social media platforms. “It’s about changing the narrative that is being told. .. [On social media] we should be talking about our accomplishments, talking about what we do.” Taking a page from the alt-right’s success getting its message out, he said, “Just publish information, just publish it. Link to our positive stories and have them go viral.”

Indeed, Hatcher said the reason for starting Blacktech activities was because, “We want to make sure everyone gets a seat at the table, or can build their own … table.”

Saturday brought about 40 conference goers into the streets via a bus tour of black history and innovation in Miami and others mentored youth entrepreneurs at the Overtown Youth Center. Blacktech Weekend, supported by the Knight Foundation and a number of other sponsors, was a warm-up to the main event, the third annual Blacktech Week, this year being held Sept. 25-30. If you missed the weekend event, much of the content was taped and some has been put up on social media (Refresh Miami posted Seibel’s talk on its Facebook page) and, as in the past, other talks will be released by Blacktech Week over next couple of weeks. You can catch up on the conversation at #BTWKND17. 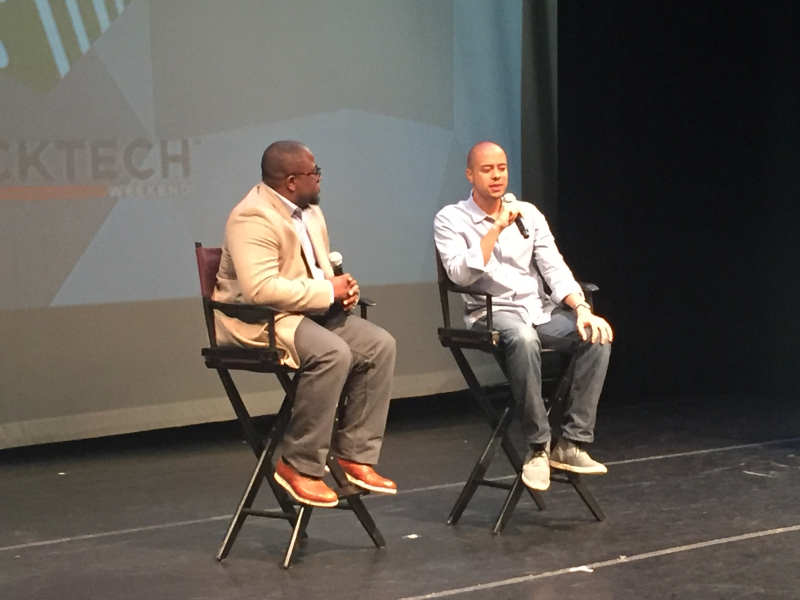 Blacktech Weekend day 2 speakers at Little Haiti Cultural Center include Richard Kirby of Venrock, with Derick Pearson, above. Below, Chris Christmas of KeepLivin and panels on social media and inclusion below. Photos by Nancy Dahlberg 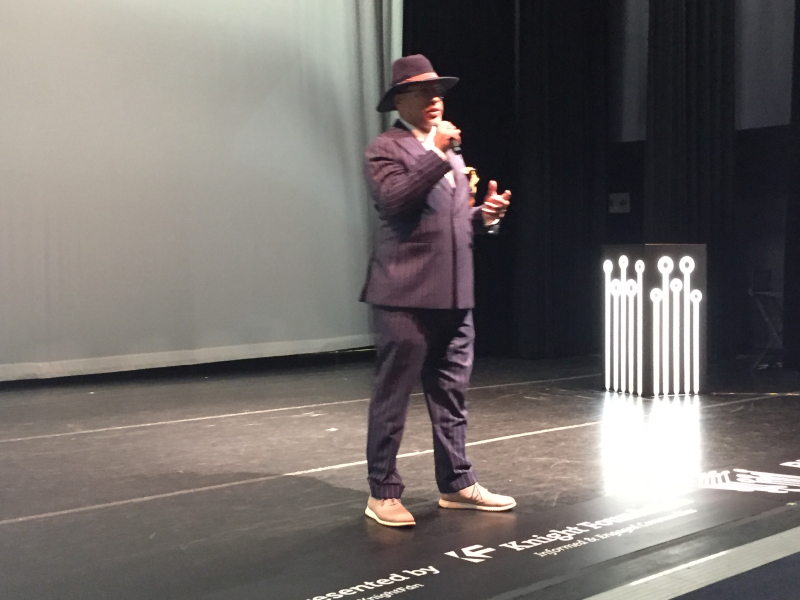 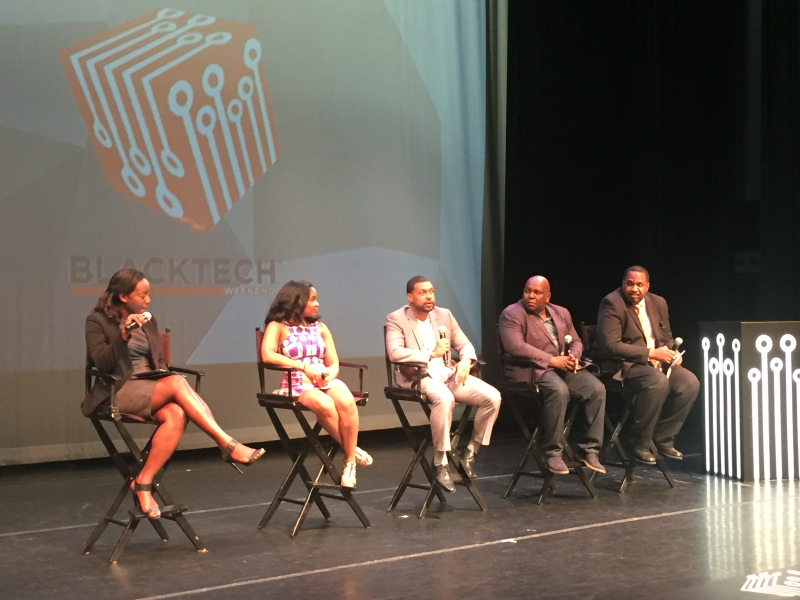 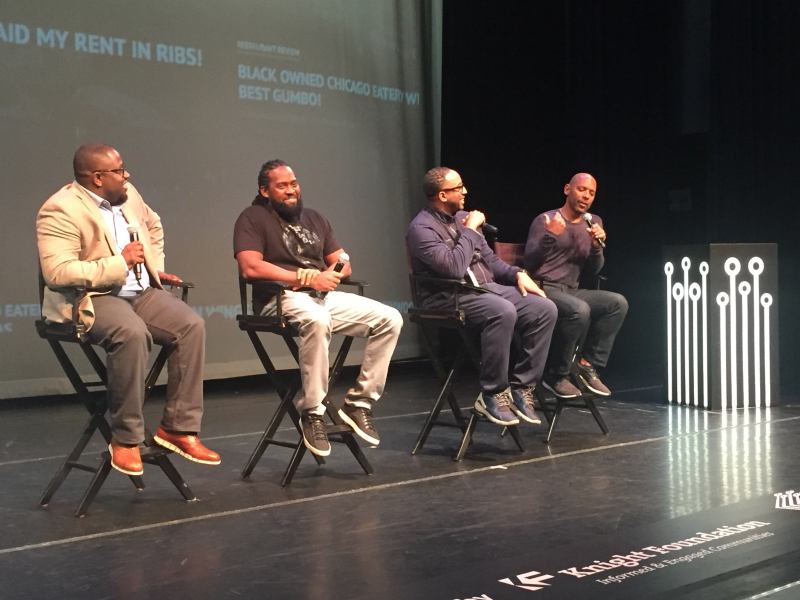