« Facebook alum pulls back curtain on TheVentureCity, to be based in Miami | Main | Politics and tech do mix, when it’s eMerge Americas » 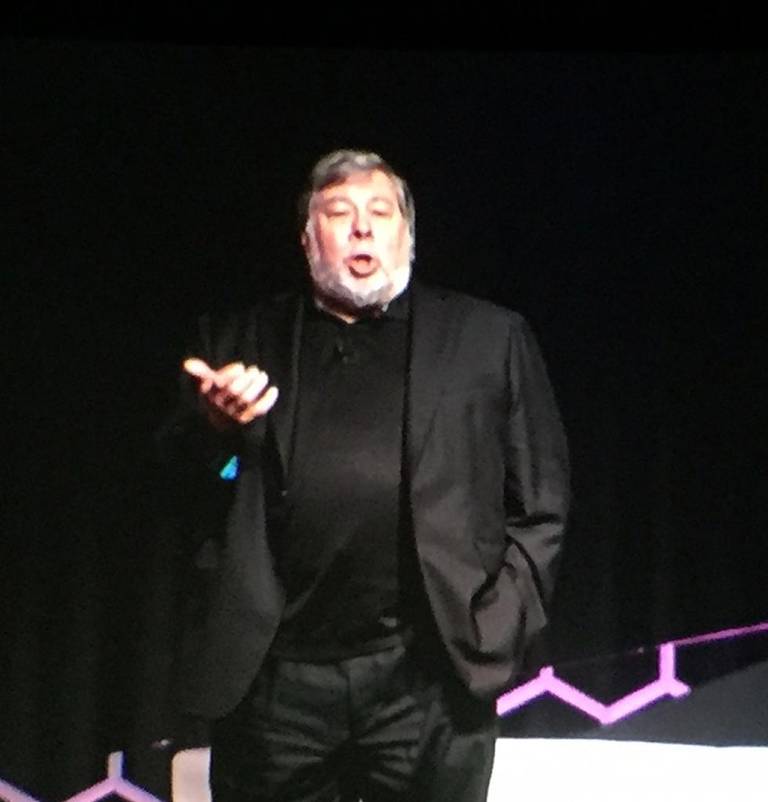 A little rain and traffic tangles from convention center construction didn’t keep hundreds of conference goers to file into eMerge Americas, the homegrown technology conference that opened Monday and continues through Tuesday.

Steve Wozniak, co-founder of Apple, shared tales of Apple’s beginnings and the revolution he and Steve Jobs seemed to see coming. The world was very different then; computers were limited to mainframes, and the cost of memory to hold a single song was $1 million. “We needed to find a way to make computing affordable for the people – that was my role and the result was Apple 1 and Apple2,” he told the packed room.

The biggest innovation of the Apple 2 was turning arcade games from hardware to software, so that a 9-year-old could make things move on a screen for the first time. Some of those kids who got their hands on Apple 2’s are now CEOs of companies today, he said. “Young people being inspired to be entrepreneurs is the most important thing in the world, in my mind.”

The folksy, often funny “Woz,” as he is commonly known, also offered his views of the present and future of innovation, admitting that he didn’t see ride-sharing coming. “When Uber came along, I thought it wouldn’t suceed – we already had taxis.”

As to whether tech will eventually eliminate too many jobs, he scoffed, “I don’t think we will ever be the secondary species to machines. ... it will replace jobs ... but as one job category disappears, another comes along.”

Apple, Google (for its artificial intelligence) and Tesla are currently among the world’s most disruptive companies, he said.

For Woz, privacy is a key concern; he canceled a talk in Turkey because he would have to check in his laptop on the plane. “Anything you’ve got the government can peek into it. I don’t like that and I think it is unconstitutional.”

Marcelo Claure, a hometown entrepreneurial hero who built Miami-based telecom Brightstar, reminded entrepreneurs and business people in the audience that a customer-first strategy is key, for any stage company (and he talked a little soccer). After Sprint shareholder SoftBank purchased Brightstar in 2014, Claure was tapped to take over CEO of the then-troubled Sprint. At the time, Sprint’s 60,000 employees had “a legacy culture of being not used to winning.” His first move: turn the behemoth back into a startup, he said.

And part of the startup culture is talking to customers. On an early listening tour, Claure asked a woman what she thought of Sprint. “Does it still exist?” she said. That comment helped drive him to find the actor who starred in Verizon’s “Can You Hear Me Now?” ads. The result: an award-winning campaign that featured that actor switching to Sprint. “That was an iconic moment for Sprint.”

Regarding a potential merger of Sprint and T-Mobile, Claure said that possibility is still in discussions. But now that Sprint’s turnaround is well underway, many more partnership options exist, including with a cable company.

At Sprint and elsewhere in the industry, the focus is now on widespread rollout of 5G service, an investment requiring $275 billion industrywide.

Switching to soccer, he said of his effort with superstar David Beckham to bring major league soccer to Miami: “We are this close. My only ask is for the politicians in Miami to work together on this last piece,” he said, referred to required zoning approvals for a stadium in Overtown. “We’re 90 percent there. If everything works out we will have soccer by 2020, which is our goal.

But, he said, the soccer group knows Miami doesn’t show up for losing teams. “So we are determined to bring in a top soccer team.”

eMerge Americas continues Monday afternoon and Tuesday with exhibits, talks, startup competitions and networking. As to the unusual logistics caused by the convention center renovation, eMerge Americas founder Manny Medina quipped, “if you had seen this place 48 hours ago we were sweating bullets.”