Singularity U's Salim Ismail to be honoree, speaker at Endeavor Miami Gala. Here's what he's been up to in Miami.

That’s the advice an expert on exponential technologies has for the startup ecosystem in Miami. 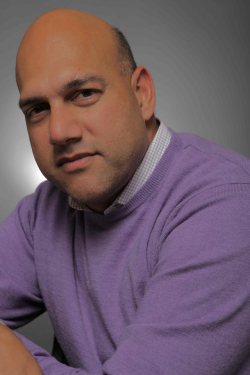 Salim Ismail is the founding executive director and now the global ambassador for Silicon Valley’s Singularity University and a board member of XPRIZE, well-known organizations that inspire, educate and fund people and projects trying to solve world-changing problems through technology.

“In Silicon Valley, people think on a global scale. In many other parts of the world, Miami included, people are trying to build a niche product or feature,” said Ismail, the author of “Exponential Organizations.”

Yet Ismail, now a Miami area resident, also said Miami has passion that you don’t find everywhere. “When you can align the natural passion of the residents here with a very big purpose or outcome, there is literally no limit as to what could happen.”

Ismail is being honored with Endeavor Miami’s Impact Award at its fourth annual benefit gala, which will be held Oct. 21 at the Faena Forum in Miami Beach, Endeavor Miami announced. During an address to gala attendees, Ismail will share his vision for entrepreneurship and what emerging technology trends mean for the future. Endeavor Miami is an arm of the global organization that selects, mentors and accelerates high-impact entrepreneurs around the world.

“We choose honorees each year that reflect the characteristics we believe will inspire our entrepreneurs and exemplify the progressive mindset that Endeavor selects in its companies,” said Laura Maydón, managing director of Endeavor Miami. “Salim is a visionary leader whose accomplishments are shaping the future of entrepreneurship and technology.”

Of particular local interest, Ismail is also the co-founder of Fastrack Institute, along with South Floridians Rodrigo Arboleda, an architect who co-founded the global nonprofit One Laptop Per Child and CEO of Fastrack, and Dr. Maurice Ferré, co-founder of Mako Surgical and now is running Insightec and other healthcare-technology ventures. Fastrack, a one-year-old nonprofit developing in Miami, plans to partner with cities that then become launching pads to rapidly build companies that can solve critical urban problems – such as mobility or access to quality healthcare or education, for example – in those cities and then scale those technologies globally.

Because Fastrack teams work through legal, regulatory and safety issues with cities as they are building the companies, “we found with Fastrack we can solve a problem facing a city at about one tenth the current cost, which makes it economically very compelling,” said Ismail, in an interview this week. “What we want to do is make Miami the capital for this kind of thinking ... what an ideal city should look like.”

Fastrack, which counts University of Miami’s Center For Computational Science as a partner, has been running pilot programs in Medellín, Colombia, and now about 20 cities around the world are interested in becoming Fastrack cities, including Miami, he said. One Fastrack problem could be traffic, he said. “Think about it. If we can solve it in Miami then that becomes an export industry that applies to every city in the world.”

Exponential companies, however they are built, need to be information-based because that scales, said Ismail, who also helps established companies quickly incorporate an exponential mindset through his company ExO Works. “Airbnb’s information is enabling people’s extra bedrooms. Ride-sharing is creating more of a liquid workforce,” he explained. Just as importantly, he said, exponential companies also need to have a massive transformative purpose. “It’s not enough to have a great product – it needs to effect meaningful change in the world.”

Ismail believes solar energy will be one of the world’s most powerful exponential technologies.

“Energy has been scarce for the whole of the history of humanity. It is about to become abundant in the next five to seven years and that will radically change the global geopolitics of it,” he said. “The Middle East will be essentially rendered mostly worthless. In Canada, the Keystone Pipeline will be irrelevant before it is even built. The poorest companies in the world are also the sunniest countries in the world; solar will really change the global equation.”

And there are other exponential technologies, including autonomous cars, drones and artificial intelligence, he said. Bitcoin and blockchain-based technology will radically change government services and public services even more so than the private financial sector, he said. Biotech technologies give people the power to edit the human genome, allowing the human body to become a software engineering problem.

Ismail, who was an executive at Yahoo and started companies before joining Singularity in 2008, moved to Miami in 2014 and has led or spoken at several events, including most recently eMerge Americas. “I love it. I am an avid tennis player and I am from India originally so I am like a lizard on the rocks – I love the humidity. I travel a lot and the airport is one of the best connected airports in the world.”

He also loves the natural diversity of the region – the ethnic makeup, the arts, the mix of industries, he said. “Absolutely the biggest success factor for any city is diversity and the richness that comes from it. All great ideas come when you cross disparate domains together.” And it has the power to attract: “It’s fascinating to see the talent that is now arriving in Miami, it really is.”

Calling himself a massive technology optimist, Ismail sees climate change as South Florida’s biggest urban challenge. “Miami has an opportunity to act as a world leader because it is going to be first affected. Whatever solutions come out of here, it will apply to about 60 percent of the global population.”

He calls Endeavor one of the most important and interesting initiatives to ever get created in entrepreneurship.

The 2017 Endeavor Miami Gala will be held Oct. 21 from 7:30 p.m. to midnight at the Faena Forum. Proceeds from the event directly support Endeavor Miami’s mission. Find more information about the gala here.