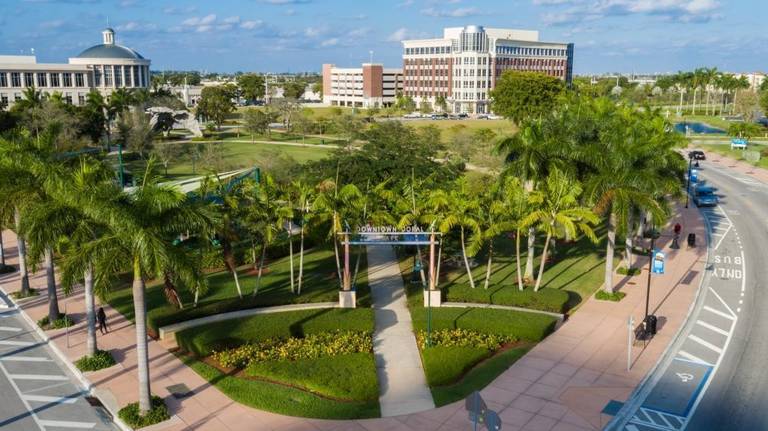 Find Seattle on a map. Now find the farthest U.S. city from it.

The Miami metro area wants to be on Amazon’s map as the home for its second headquarters, a planned $5 billion, eight-million-square-foot, 50,000-employee campus for Amazon executives, staff and high-tech professionals (Read: high-paying jobs).

But while economic development agencies in Miami-Dade, Broward and Palm Beach counties are putting together a rare, tri-county proposal to lure the Seattle-based online shopping giant to the region, one South Florida city is flying solo with its pitch to bring Amazon here.

The city of Doral, in conjunction with developer Codina Partners, is offering Amazon 47 acres of prime space in downtown Doral for the first phase of its HQ2 expansion. Future growth space for the Amazon project would include part of the 250-acre White golf course, which Codina and Lennar Homes bought in 2016 and had earmarked to use for single-family home development.

“When we looked at Amazon’s [request for proposal], we felt like we met all the requirements to be the home of their second headquarters,” said Doral Mayor Juan Carlos Bermudez. “I may be a little bit biased, but I think Doral is a very good fit.”

For its planned HQ2, Amazon seeks a major metropolitan area of more than 1 million people within 45 minutes of an airport and near quality universities. Its checklist for its planned HQ2 includes a business-friendly climate, low taxes, cultural amenities, proximity to mass transit, affordable cost of living, a diverse population — and a package of economic development incentives.

Bermudez said Doral fits all those requirements, including proximity to Miami International Airport and Florida International University; a booming (and growing) downtown area of restaurants, shops and entertainment; a large housing stock of condos, apartments and single-family homes; an educated and multilingual workforce; an ethnically diverse population, and a modern infrastructure with public spaces, bike paths and other live-work-play conducers.

The mayor said Doral even fulfills Amazon’s desire for “proximity to mass transit” with its three routes of free trolley service, which connects to the Palmetto Metrorail Station in Medley. At Wednesday night’s Doral City Council meeting, the council unanimously approved a resolution to endorse and support the Miami-Dade Transportation Planning Organization’s Miami Area Rapid Transit Smart Plan, which intends to reduce the county’s traffic congestion woes — a particularly grave problem in Doral.

“If we were going to submit our proposal with the existing status quo transportation, it would probably be deficient,” said Ana Codina, CEO of Codina Properties. “But we’re coupling our proposal with some ideas we have to enhance and improve the bus and trolley system so that there would be more transit options than there are now. I see it as a challenge, but not something that can’t be overcome.”

Doral is the fastest-growing city in Florida and 11th fastest in the U.S., according to Florida International University’s Metropolitan Center. Its population is 58,000, and the median household income in 2015 was $72,933, according to the U.S. Census Bureau.

But the competition to become the home of Amazon’s HQ2 will be fierce — and rich with incentive offers. Since Amazon put out its request in early September, the Super Bowl of Economic Development has already drawn interest from several hundred metro areas. Orlando, Los Angeles, Philadelphia, Baltimore, Brooklyn, Chicago, Boston, Denver, Toronto, Ottawa, Washington, D.C., St. Louis, Las Vegas, Detroit, Tulsa, Tucson and even Frisco, Texas, a suburb of Dallas, are a few that have already said they will have or will be submitting proposals by the Oct. 19 deadline. Tucson even sent Amazon a 21-foot cactus.

But none of those cities can boast that Amazon founder and CEO Jeff Bezos graduated from one of their high schools. Bezos was valedictorian at Miami Palmetto and was a Miami Herald Silver Knight recipient.

The Miami-Dade Beacon Council, the Greater Fort Lauderdale Alliance in Broward County and the Business Development Board of Palm Beach County are working on a proposal of their own to lure Amazon.

“There is a real opportunity to show off the region’s transit and other assets,” said Susan Greene, spokeswoman for the Miami-Dade Beacon Council, adding that the timing of Brightline “couldn’t be better.” Brightline’s inter-city train service is expected to connect the downtown centers of the three counties before the end of the year.

“We are in conversations with Mayor Bermudez about potential sites in Doral,” she added. “We’ve heard from lots of people with sites in Miami-Dade to consider.”

Bermudez said that he learned about the tri-county effort last week while talking to Beacon Council president and CEO Michael Finney.

“In the long run, it would behoove South Florida to offer Amazon several opportunities,” Bermudez said about the unexpected competition. “But we began this process before we even knew the Beacon Council was involved. The majority of Miami-Dade County residents live west of I-95. I see no reason why we can’t offer different options as a community.”

At stake for South Florida: Thousands of high-paying technology jobs in an economy that is now highly dependent on low-wage service jobs.

“Amazon HQ2 will be a complete headquarters for Amazon — not a satellite office,” Amazon said in its news release. “Amazon expects to hire new teams and executives in HQ2, and will also let existing senior leaders across the company decide whether to locate their teams in HQ1, HQ2 or both. The company expects that employees who are currently working in HQ1 can choose to continue working there, or they could have an opportunity to move if they would prefer to be located in HQ2.”

Amazon’s headquarters in Seattle covers more than 8 million square feet of space across 33 buildings and houses about 40,000 of Amazon’s global workforce of about 380,000.

The practice of cities and states lavishing millions of dollars in tax breaks, relocation perks and other credits on companies to lure them is widespread, yet still controversial. The media often doesn’t hear about these kinds of incentive-laden deals being negotiated until a deal is done — or at least in the final stretches. But Amazon’s very public call for proposals changed all that.

Timothy J. Bartik, a senior economist at the W.E. Upjohn Institute for Employment Research in Kalamazoo, Michigan, told the New York Times that the average incentive package from a state usually adds up to 2 percent to 3 percent of wages. Recently, he said, there has been a spate of mega-deals, such as the $3 billion in state tax credits that Wisconsin offered Taiwanese electronics giant Foxconn. Boston’s deal to nab GE was another. Such outsized offers could end up being a “winner’s curse” where costs outweigh the benefits, he said.

“Competition for jobs should not be seen to hinge on which government can write the biggest check to an employer, but on the kinds of things that officials in Delaware and other states spend so much time on to make their communities places worth living in: the quality of schools, workforce development programs, the transportation grid and other infrastructure, and the overall quality of life,” Jack Markell, former governor of Delaware, wrote in the New York Times.