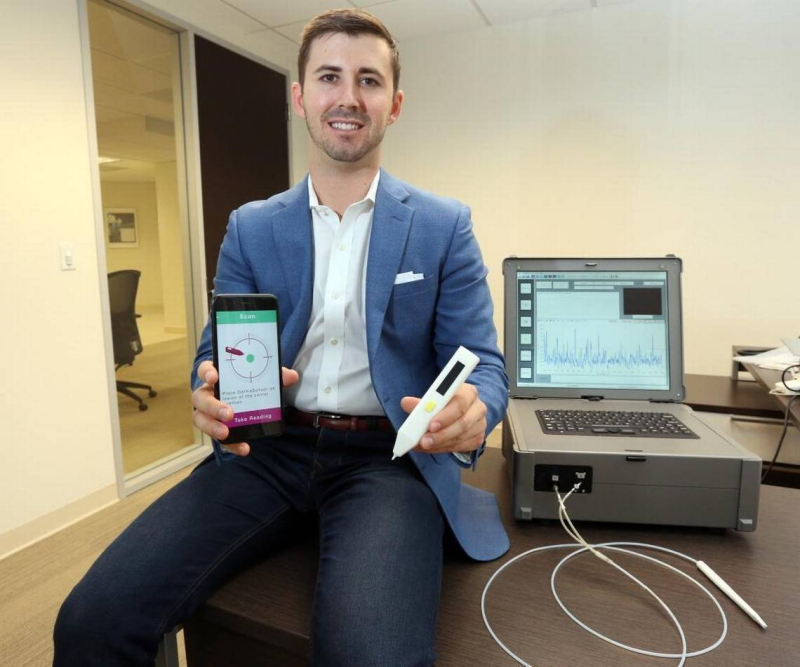 Cody Simmons is CEO of DermaSensor, a Miami-based health-tech startup that is developing a medical device that aims to detect the risk of skin cancer. A user would scan a mole or lesion with the device and the technology inside the device would determine whether the lesion is potentially cancerous, based on its data and algorithm. A prototype of the handheld device that Simmons is holding is a little larger than a pen, but the device started out at as a 30-pound desktop machine that sits next to him. The technology has been miniaturized to be contained in a hand-held device. Emily Michot emichot@miamiherald.com

Chances are you have looked at a mole or irregularity on your skin and thought that maybe you should see a doctor about it. And, chances are, you didn’t.

Yet, there are more new cases of skin cancer every year than the combined incidences of cancers of the breast, prostate, lung and colon, according to the American Cancer Society. And one person in the U.S. dies every 52 minutes of melanoma, the most-deadly form of skin cancer, which can afflict any age group, gender or race.

DermaSensor, a Miami-based health-technology startup, has been quietly developing a hand-held device that uses artificial intelligence to help users evaluate skin lesions for cancer. The device, undergoing clinical trials, would allow physicians and eventually consumers to perform simple skin checks in physician offices and patient homes at the first sign of a potential problem.

DermaSensor recently completed a $2 million financing deal, comprised primarily of South Florida and New York angel investors with medical device and finance expertise. This financing round brings the company’s total funds that have been raised to $4.45 million. The company is now raising a Series A financing round to further grow its team and fund continued product development, clinical development and commercial efforts.

“We are excited about this novel spectroscopy technology and its potential to transform skin cancer care and save lives around the world,” said Cody Simmons, CEO of DermaSensor.

The company’s recent clinical developments spring from the rapidly growing medical device and health-tech industry in South Florida. The industry benefits from the region’s large hospital district and access to universities and research institutes, the area’s history with successful medical device and pharmaceutical companies, and access to Latin American markets. A number of companies have sprung from Mako Surgical’s sale, for instance. Others are incubating at wet labs and offices at Cambridge Innovation Center, in partnership with the University of Miami. Some have benefited from the services of Startupbootcamp Miami, an accelerator for health-tech startup that focuses on eradicating healthcare disparities in the United States.

DermaSensor was founded in 2009 by healthcare investor and serial entrepreneur Dr. Maurice Ferré, who was previously the CEO of MAKO Surgical, which sold to Stryker for $1.65 billion. Ferré, son of the former Miami mayor, is also chairman and CEO of Insightec, a brain health company founded in Israel; co-founder of Miami-based Fastrack Institute; and on the board of Endeavor Miami, an organization that supports high-impact entrepreneurship.

“What we’ve learned is that this is a public health issue,” Ferré said about DermaSensor’s journey. “The issue is catching these things early, and what we find is not enough people go see dermatologists.”

DermaSensor’s patented technology was pioneered at Boston University and University College London, and the device has been undergoing development since 2011 through clinical studies and collaborations with dermatologists in Florida.

The device itself is evolving, from a 30-pound desktop system to a hand-held device that is now just a little larger than a pen.

The device itself includes the technology, which records the skin lesion and runs a machine-learning algorithm that was developed using a trove of spectroscopy data on lesions. Within seconds, the technology evaluates the risk and recommends further evaluation from a dermatologist, if necessary. Clinical validation of the prototype is underway in Florida clinics, Simmons said.

Simmons came aboard in 2016 to lead the company through its clinical trials and into commercialization. Before joining DermaSensor, Simmons led commercial efforts for a Silicon Valley mobile health device startup and held business development and commercial strategy roles at biotech company Genentech.

Christian Seale, founder of Startupbootcamp Miami, originally introduced Simmons to Ferré, a mentor and advisor for Startupbootcamp, with the idea that they might work together to build DermaSensor. Seale is a member of DermaSensor’s advisory board, which also includes Dr. Stewart Davis and other Miami entrepreneurs in the healthcare and tech industries. “The Miami ecosystem is working,” Ferré said.

DermaSensor is undergoing clinical trials in the United States, working toward FDA clearance, a process that can take years. DermaSensor’s product will likely hit the market first in Europe, where the regulatory process is further along, Simmons said.

The ultimate goal is to be able to sell the device at an affordable price, for a few hundred dollars, Simmons said.

Once cleared by regulators, the go-to-market strategy is to sell the device first to clinicians, and eventually consumers. To save lives, he said, “we want to make it very easy to use.”