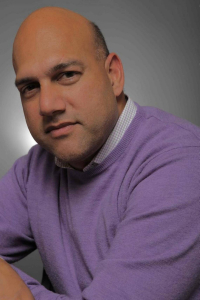 Salim Ismail, founding executive director of Singularity University and chairman of the new Miami-based Fastrack Institute, has joined Rokk3r Fuel, a venture capital firm based in Miami, as a general partner.

With the addition to Ismail, Rokk3r Fuel is also renaming its flagship fund Rokk3r Fuel ExO.

“For the last decade, Salim has been a visionary and has defined how we as an industry think about exponential organizations. We view his decision to join Rokk3r Fuel as a strong validation of both our commitment to identifying and investing in exponential technology, and our proprietary approach to working with our limited partners to optimize the way that venture is working to meet their investment objectives," said Jeff Ransdell, founding partner of Rokk3r Fuel ExO, in a news release.

Ismail is co-founder and chairman of the Fastrack Institute in Miami, as well as chairman of ExO Works, which he founded. He is also a public speaker and authored the business best-seller Exponential Organizations. He is  now a global ambassador for Singularity, based at NASA’s Ames Research Center with a  goal is to "educate, inspire, and empower a new generation of leaders to apply exponential technologies to address humanity's grand challenges."

Said Ismail: "Today there are eight billion Internet-connected devices in the world. By 2020, there will be 50 billion. Will computer-driven cars be a reality in three years? Will we see a dramatically lengthened lifespan and delayed retirements in a matter of one to two decades? What does this mean for investment, growth, and contraction in key industries? As the world becomes more digital, advancements in technology are skyrocketing. Rokk3r Fuel ExO is tracking the trajectory of fascinating projects and investing in the ones that are sure to change our lives and challenge societal norms as we know them. Our insight on how to invest and where to deploy capital is driven around our exponential outlook on the world as we know it today.”

Before his work at Singularity, Ismail was a vice president at Yahoo, where he built and ran Brickhouse, the company's internal incubator. He co-founded and operated seven early-stage companies, including PubSub Concepts, which laid some of the foundation for the real-time web. His last company, Ångströ, a news aggregation startup, was sold to Google in 2010.

Ismail is being honored by Endeavor Miami at its annual benefit gala Oct. 21.

Rokk3r Fuel was launched  in March 2017 with the goal of investing in exponential technologies at a global level.  It has said its goal is to raise a $150 million fund. “The addition of Salim Ismail as general partner advances Rokk3r Fuel’s goal of globally sourcing and funding the best entrepreneurs who are building companies at the intersection of exponential technologies,” said Nabyl Charania, general partner at Rokk3r Fuel and CEO of Rokk3r Labs.