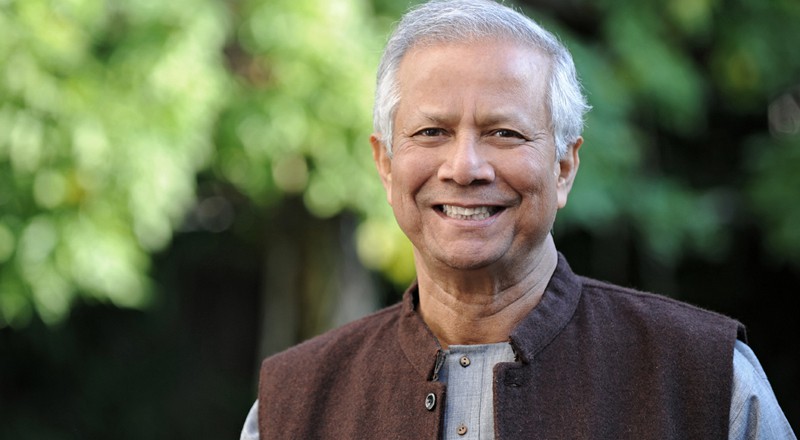 With Nobel Laureate Muhammad Yunus, the father of micro-financing and world-renowned champion of poverty alleviation and social entrepreneurship, by her side, the CEO of Grameen America announced Monday evening that the micro-lending organization for women would be bringing its services by the end of the year to Miami-Dade County, an area with one of the highest poverty rates in the nation.

Grameen America facilitates micro loans to women to help them start businesses, as well as providing training and support. Miami will be the 13th city location in the Grameen America network that started in 2008, and over the next several years, the organization will likely add several more branches in the area, said Andrea Jung, CEO of the network. New York City, for instance, has seven branches.

She said in a few years’ time, 4,000 to 5,000 women who have been shut off from traditional networks of financing can be helped. Grameen America also has a credit score program that has helped women who lack scores, or who have very low ones, achieve scores of 650 or higher in 26 weeks, she said.

Yunus and Jung took part in a discussion with an entrepreneurs’ group in Brickell before they headed to Books & Books in Coral Gables, where the 77-year-old social entrepreneur would be discussing his new book, “A World of Three Zeros: The New Economics of Zero Poverty, Zero Unemployment, and Zero Net Carbon Emissions.” Yunus pioneered the micro-credit concept that uses small loans made at affordable interest rates to transform the lives of impoverished women. He is the founder of the Grameen Bank in Bangladesh, and Yunus and Grameen Bank were jointly awarded the Nobel Peace Prize in 2006.

“Poverty is not a problem of the people — it’s the system around them. Society never gave people the base for which to grow,” said Yunus, who also said that he hopes one day, the only place people will experience poverty is in a poverty museum.

In calling for a world with zero poverty, unemployment and net carbon emissions, Yunus said the problem that needs to be solved is to reverse the greatly accelerated wealth concentration at the very top — what he called “an explosive time bomb ticking away” — while anger and unhappiness festers at the bottom, he told the entrepreneurial group gathered by attorney Juan Pablo Cappello at Novecento on Brickell. “We can not go on ignoring it.”

Yunus said the way to eliminate unemployment is through entrepreneurship: “The job is such an old-fashioned idea. Humans are not born to work for anyone. ... Be someone who has unleashed his power and make something happen.”

Grameen America opened its first branch in 2008 in the New York City area. Its first year, it helped 500 women with $1 million in capital. Now the organization has lent $1 billion to more than 100,000 women and their families in its 19 branches in 12 cities — loans that have helped women start food businesses, cleaning services, lawn services, dress shops and tire stores. First-time loans are typically $1,500, and subsequent loans can be larger as the women establish a track record. Grameen America has a 99 percent loan repayment rate.

“We do everything banks won’t do,” said Jung, former chairman and CEO of Avon. “It’s a brilliant social business model that people didn’t think would work in the U.S.”

JPMorgan Chase provided a 2016 grant to Grameen America of $500,000 to expand its network to Miami. Miami Foundation is also a funder, and other corporations are coming on board. “We truly believed in the Grameen model and saw its potential to benefit Miami’s underserved women entrepreneurs,” said Maria Escorcia, VP of global philanthropy for the bank.

The needs in Miami-Dade are great. According to a United Way report released in February, six out of every 10 Miami-Dade County residents struggle to pay for the basic necessities of food, housing, transportation, healthcare and childcare, and 21 percent of local families live below the poverty line.

Grameen America would be joining Accion and Partners for Self Employment, which have already been providing micro-loans and training in South Florida.

“We will be here for the long term in this city,” Jung said. “Our goal is to have a movement that offers a hand up, not a handout, and the only way to do that is through financial inclusion.”