CarePredict tracks seniors’ health for caregivers in a natural way 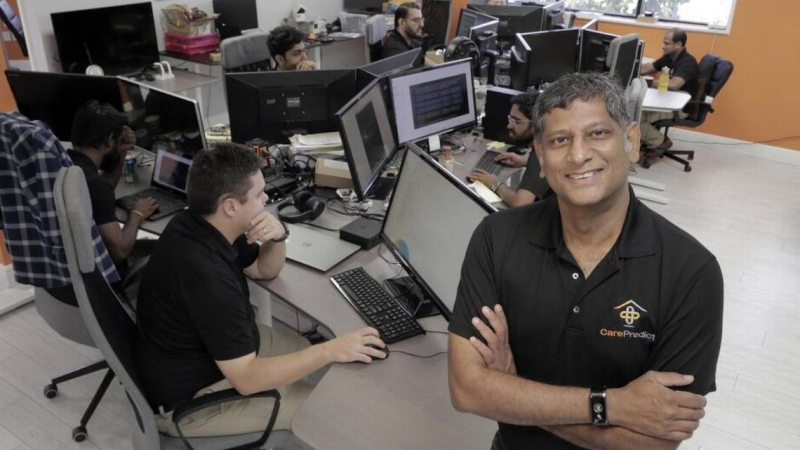 Startup Spotlight: CarePredict of Plantation, founded by health-technology veteran Satish Movva, provides an AI-driven platform for elder care that uses deep learning to surface insights based on the activities of daily living of seniors.

Headquarters: Plantation; also has an office in Silicon Valley.

Story: Health-technology veteran Satish Movva founded CarePredict to help him take care of his now 90- and 80-year-old parents. They live 10 miles away from where he lives in western Broward County, and because of their advancing age, he could not rely on one to keep an eye on the other.

He noticed that changes in activity and behavior patterns showed up well before the underlying issues manifested into medical conditions and sought a system to observe his parents continuously and let him know of these changes early enough to intervene.

Finding the existing technologies inadequate and outdated, Movva set about creating a first-in-the-industry system to observe the daily activity and behavior patterns of each parent individually and with privacy, and alert him to anomalies. Movva has worked in technology for 30 years, 23 of them in healthcare, including being the founding CIO for Sheridan Healthcare and creating its first mobile EMR device on the Palm Pilot. He also created the first web-based home-care platform at Interim Healthcare. 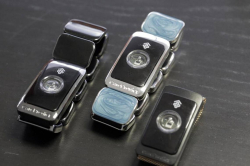 CarePredict is an AI-driven platform for elder care that uses deep learning to provide insights based on the daily activities of seniors. It starts with a wearable — a bracelet — that collects data that is sent to an app.

“We collect our data through lightweight sensors for contextual cues and a wearable,” Movva said. “We detect activities a senior is performing such as eating, drinking, bathing, cooking, sleeping, functional activity, and we couple that with contextual cues to surface insights like self-neglect, for example, due to depression, unusual toileting patterns, for example, due to UTIs, malnutrition and dehydration, all without any self-reporting by the senior or need for any other human observer.”

That includes fall prediction, too: “This whole industry has been fixated on fall detection ... but the issue is when someone falls it is too late. Falls are the single biggest inflexion point in aging, ... if you can prevent those falls you are better off. We are probably the pioneers in figuring out fall prediction rather than fall detection.”

CarePredict has been commercially available to senior group living facilities and home care agencies since March. Four senior living chains are already using the platform. CarePredict, now a team of 17 engineers and data scientists, has hired a sales team to ramp up business development in 2018. The company plans to address the direct-to-consumer market in the future.

“This company has the DNA to be enormously successful — the right team, the right market and the right solution. It’s not going to happen overnight, but they have all the right things going for them,” said Peter Livingston, a CarePredict investor and board member.

Launched: Company formed in May 2013

Recent milestones reached: Started commercializing product in 2017; four commercial assisted living and memory care enterprises signed up in the U.S. and Canada in 2017; three U.S. patents granted in 2017; one of two U.S. companies selected by Google for their “Google for Entrepreneurs” mentorship in deep learning and AI in Waterloo/Toronto campus; opened office in Palo Alto, CA in 2017.

Biggest startup challenge: Building the team and funding the mission.

Next step: Scaling the company. CarePredict is raising funds to expand company operations for installations and training and bringing on experienced industry sales leaders to increase outbound sales.

“CarePredict is solving a big problem, in a rapidly growing market, in a novel way,” said Dean Hatton, a founding partner with Las Olas Venture Capital and a CarePredict investor/board member. “The company has built a robust pipeline of interested prospects. Interestingly, this has been accomplished without sales or marketing efforts, principally through word-of-mouth in the assisted living facility ecosystem. Recently, Satish has added sales resources and will soon launch an outbound sales effort. The demand will be immense. Meeting that demand will be the greatest challenge ahead.”

Is my mole cancerous? Miami-based DermaSensor developing a hand-held device to evaluate risk

BloomsyBox: A startup idea takes root that keeps on giving

How sea-rise ready is your home or business? Coastal Risk offers the lowdown

Need affordable travel in Latin America? Voyhoy has the ticket