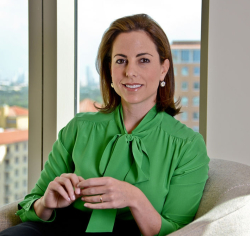 Adriana Cisneros, the Miami-based CEO of global media and real estate group Cisneros, will join the John S. and James L. Knight board of trustees. With the appointment, Knight gets an executive who has played a leading role in supporting Miami’s burgeoning startup ecosystem.

Adriana Cisneros is the third generation to head the family company, with offices throughout Latin America but much of its operations in Miami. Before taking the helm as CEO in 2013, she led the group’s digital strategy and created the company’s three divisions: Cisneros Media, Cisneros Interactive and Cisneros Real Estate.

Cisneros is also active in the Miami entrepreneurship community. She has been the founding co-chair since 2013 of Endeavor Miami, which supports high-impact entrepreneurship. She is also on the advisory board member of coding school Wyncode and accelerator and fund TheVentureCity.

“Knight Foundation’s support for the arts and entrepreneurship in Miami has been transformative, and the foundation’s work on trust, media and democracy puts it at the center of one of the most important discussions of our time,” said Cisneros, in a statement. “I am honored to be able to contribute to the foundation’s work promoting informed and engaged communities.”

Cisneros also is president of Fundación Cisneros, the family’s non-profit focused on improving education in Latin America. She is on the boards of the International Academy of Television Arts & Sciences, the Paley Center for Media, MoMA’s Latin American Acquisition Fund, which is dedicated to contemporary art, the University of Miami and Parrot Analytics.

“Adriana Cisneros’ leadership is characterized by innovation, the smart utilization of new technology and a commitment to the communities where her family’s company operates,” said Alberto Ibargüen, Knight Foundation president. “She reflects, in the 21stcentury, the values that guided the Knight brothers as they built a 20th century news company and created Knight Foundation.”

She holds a bachelor’s degree from Columbia University and a master’s degree in journalism from New York University. She is also a graduate of Harvard Business School’s Program for Leadership Development, and is an Aspen Institute Henry Crown Fellow.