« Wyncode to offer $1.4 million in scholarships to promote female involvement in tech | Main | 500 Startups decides to 'double down' on Miami, opens office for Florida, Latin America »

Co-founder Ryan Cohen stepping down as CEO of Chewy, a homegrown success story 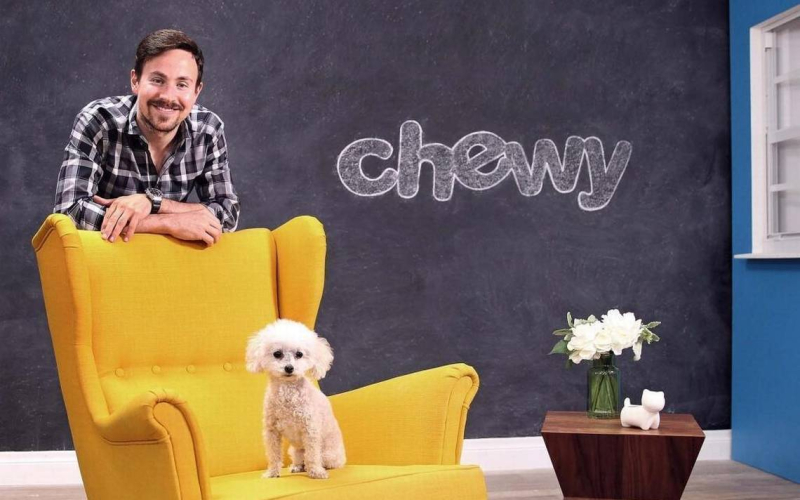 Ryan Cohen, CEO of Chewy.com, and his poodle Tylee at the company’s photo studio in Dania Beach in 2016. Photo by C.M. GUERRERO. cmguerrero@elnuevoherald.com

PetSmart announced today that Ryan Cohen, the co-founder and CEO of Chewy.com, is stepping down.

In six years, the 32-year-old Cohen grew Chewy to a homegrown success story, selling it to PetSmart for about $3.35 billion last year, the largest e-commerce acquisition in history.

Chewy, headquartered in Dania Beach, will be led by Sumit Singh, current chief operating officer of Chewy, who joined the company in August 2017 from his role as director of Amazon Fresh Worldwide, the company said.

It’s a familiar story in corporate acquisitions -- that is, the founding CEO steps down to pursue other passions or is replaced at the top -- and it gives Cohen the opportunity to start or fund something anew in South Florida, which is what ecosystems are all about.

Cohen has quite a story of his own. Growing Chewy.com from zero revenues to a multi-billion company was an incredible ride, Cohen said in a keynote appearance at the Florida Venture Capital Conference early this month (see a post here). The pet supplies retailer now has about 7,000 employees nationwide.

Cohen, who has always been entrepreneurial and has no college degree, said he started Chewy to replicate the same “amazing” customer experience of his neighborhood pet store (he is pet parent of a poodle, Tylee), but online. He used Zappos, the massive shoe e-tailer, as a model and inspiration. When he needed capital to grow, he approached more than 100 investors – and they all passed. “But I thought there’s a chance … we were on to something genius. I felt with scale we will prove them wrong,” Cohen told the audience of investors and entrepreneurs at the conference.

When the sale to PetSmart was announced, some longtime customers worried their beloved brand would change, and this news will not make them feel better. Still, the hyper-growth continued after the acquisition. In February, Chewy opened a 100,000-square-foot facility for its customer service team, which had outgrown its space in the Dania Beach headquarters. In total, Chewy employs 1,500 in South Florida, with 1,000 in Hollywood, out of its 7,000 worldwide. Chewy plans to hire 400 more customer service employees for Chewy Hollywood this year, Cohen said earlier this year.

For its part, PetSmart said in a news release announcing the CEO change that the company will continue to operate largely as an independent subsidiary of PetSmart, focusing on its current business strategy.

“Ryan is an amazing leader who has built a unique and powerful ecommerce business with a strong culture that is laser-focused on serving the needs of customers and their pets. I have full confidence that this will continue under the leadership of Sumit, a seasoned ecommerce leader who is well equipped to carry Chewy’s strategy forward and grow the company,” said Raymond Svider, a managing partner at BC Partners and executive chairman of PetSmart.  “We have enjoyed a great relationship with Ryan and respect his desire to step back from running the company after the relentless pace of the last seven years; he has our unwavering support and we wish him well.”

Said Singh: “We will remain focused on Chewy’s founding vision, core values, operating principles and goals. Our business momentum remains strong as we continue to scale while improving our customers’ experience and lowering our costs. We will stay focused, keep moving forward and continue with our vision of making Chewy the best pet retailer on the planet.”

In a statement Thursday, Cohen said: “The past 7 years have been a tremendous journey and the learning experience of a lifetime. In a short time span, Chewy has gone from a concept to disrupting and redefining an entire industry. I feel the time is right for me to pass on the torch so I can pursue personal goals and spend time with my family. I’m confident in Sumit and believe he will continue to carry on the vision of making Chewy the best and biggest pet retailer on the planet.”

What’s next for Cohen? He’s not saying yet, but no doubt it will be entrepreneurial. He also has the means to support other startups, should he want to go the investor route. But to be sure, entrepreneurship is in his DNA, he told the audience at his most recent appearance in South Florida.

“I have never been a clear cut career path kind of person. I started my first business when I was 14 or 15 building websites… My father was a business owner so I saw what it was. It was very clear early on that I would be my own boss,” he said at the appearance in January.

In the recent talk, he discussed the challenges along the way and shared war stories about Chewy, including the difficulty finding funding. He said he moved forward and never changed his business strategy, even after a hundred investor doors were shut on him.

“I spoke to over 100 investors and they all passed for one reason or another. At one point I got so desperate … we took a trip to Sand Hill Road [in Silicon Valley]. I literally went door to door -- that didn’t work. But one of those 100 investors that passed made a visit later and I remember it like yesterday.  I was 25 at the time, and looked like 15 years old. He followed up with us, was impressed with all of our numbers and ultimately he invested.”

Cohen, who describes himself as obsessive, relentless and contrarian, said the biggest challenge was managing the hyper-growth. He  talked about the transformative decision to bring fulfillment in house in 2014, rather than relying on a third party. “It was three or four months of pain. Everything that could have gone wrong went wrong. We worked through those problems and … in order for us to scale a billion dollar company we needed to go through that.”

Cohen also had some advice to aspiring entrepreneurs.

“You need to make sure you are in a place in the world that you are ready for this. Scaling a business is going to test you physically and emotionally, it’s not for everyone. I have an 11 month old now, and scaling a startup from inception to reality is like taking a human being from infancy to adulthood in a very short period of time. It’s going to get sick in the middle of night and you are going to be up all night taking care of it. It’s going to make mistakes and you will learn from it. It is a huge act of selflessness and dedication and if you are ready for it, it is going to be a crazy, crazy, crazy roller-coaster and it will be the journey of a lifetime.”