« Miami startup Neighborhood Fuel gets gassed up, too: $2 million in venture funding | Main | RIP, Jugofresh, thanks for leading the way. »

This cute home can be 3-D printed for $4,000 -- and be a solution for the developing world 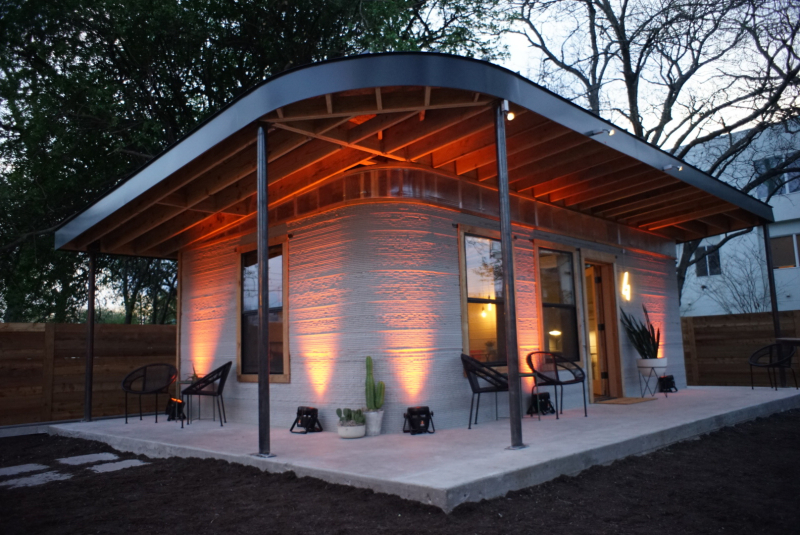 Building a home in a day for under $4,000? It can be done with 3-D printing technology and could be a sustainable solution for Haiti and the rest of the developing world.

New Story, the nonprofit startup that created hundreds of small concrete homes for Haitians after other nonprofits faltered, partnered with ICON, a construction technologies company, to unveil the first permitted, 3D-printed home created specifically for the developing world. The 350-square-foot home was unveiled Monday at South By Southwest in Austin, Texas.

In the past couple of years, New Story has funded and built hundreds of homes in Haiti and El Salvador. But even though its crowdfunding model is efficient and effective, the nonprofit can’t keep up with the demand building homes the traditional way. The 3D-printed home unveiled Monday serves as proof-of-concept for sustainable homebuilding that will allow for safer, more affordable homes for more families, faster than ever, said Brett Hagler, the CEO of Silicon Valley-based New Story.

“We feel it’s our responsibility to challenge traditional methods and work toward ending homelessness,” said Hagler, who grew up in South Florida and co-founded the nonprofit with a friend, Mike Arrieta, who attended the same Broward high school, Coral Springs Christian Academy.

Other companies are working on 3-D homebuilding technology, but they are primarily targeting high-end consumers. “We thought, okay, what if the bottom billion weren’t the last ones to get this, but the first ones to get this? It made sense for us to try to leapfrog what’s happening domestically, because our homes are so simple,” Hagler told FastCompany, which broke the story.

The 3-D printer, called the Vulcan, is designed to work in places like Haiti and rural El Salvador where power, potable water and technical assistance can be sparse. It will be built to fit on a truck, so it can be easily transported from site to site. The printer will use a common mortar and the same concrete foundation the YCombinator-funded New Story has been using at its other houses, including in Leveque, Haiti, 40 minutes from Port-au-Prince.

“Conventional construction methods have many baked-in drawbacks and problems that we’ve taken for granted for so long that we forgot how to imagine any alternative,” said Jason Ballard, co-founder of ICON. “With 3D printing, you not only have a continuous thermal envelope, high thermal mass, and near zero-waste, but you also have speed, a much broader design palette, next-level resiliency, and the possibility of a quantum leap in affordability. This isn’t 10 percent better, it’s 10 times better.”

New Story’s goal: To print the first community of homes for poor families in El Salvador in the coming 18 months, and then through partnerships, scale up production in the developing world over the next few years.

New Story currently works in Mexico, Haiti, El Salvador and Bolivia and in three years has funded more than 1,400 homes for families in need. More than 850 of those $6,500 concrete homes have been built and families have moved in. The nonprofit says 100 percent of donations goes to build homes while organization overhead and R&D is covered by private donors.

And this little home, now sitting in an Austin backyard, could be the start of something big in social ventures. Hagler hopes New Story's upcoming project will serve as a catalyst for the industry.