A clue that Beckham MLS team in Miami is still in the works...

After a huge initial buzz in February 2014 when soccer icon David Beckham announced he wanted to bring a Major League Soccer team to Miami, things have been mighty quiet of late as they work out their stadium land deal.

But a story in the Miami Herald last week may be a clue that the Beckham plan is still in the works...

Jurgen Klinsmann named his 26-man roster as the U.S. national team gets ready to face rival Mexico Friday night in Columbus, Ohio, for a World Cup qualifying match. The game is at 7:45 p.m. on FS1 and Univision.

Among the players called in for Team USA are Alejandro Bedoya (Weston) and Jozy Altidore (Boca Raton). Here is the full roster:

At first glance, you'd never think William Yarbrough speaks perfect Spanish. But then he tells you his story, and it makes perfect sense... Here is a link to my story, and below are interviews in both languages...the US plays Cuba in Havana Friday at 4 p.m.

Watch interviews of Yarbrough in perfect English and perfect Spanish:

On his upbringing in Mexico but playing for the United States:
https://ussoccer.box.com/s/sqhpttq1pdfbvk6iqgw3rb0yg22f8pht

On whether he wanted to play for Mexico or the United States:
https://ussoccer.box.com/s/3vcl3enoebflma6xu1p2pl2uv9kclwii

On the languages he spoke growing up:
https://ussoccer.box.com/s/9ouxzg961cxcz5cd08zjgfnp9p8ndvsq

On the opportunity presented by being called into this camp:
https://ussoccer.box.com/s/17upc7owskafmfc5dunrxecb6v6elw6t

On how he's continued to improve as a goalkeeper:
https://ussoccer.box.com/s/clt68h388cbzbh4z4oov55dsgt8aatsz

US coach Jurgen Klinsmann called in his 23-man roster for Miami camp, followed by Oct. 7 friendly at Cuba (4 pm., ESPN2, UniMas) and another friendly vs. New Zealand four days later. Here's who's on the roster...

Landon Donovan returned to the L.A. Galaxy on Sunday after a 21-month retirement, and he was the first to admit that the time off showed. He entered to game in the 83rd minute, with the Galaxy up 4-1 over Orlando City.

"I'm so far away," Donovan said after 4-2 win. "I came into a game where both teams were exhausted, and I was the slowest player on the field.

"I need to get myself ready to compete in a real way. Bruce (Arena) and the coaching staff need to know that when they put me in, it can mean something. So tonight worked out well, but I need to be able to contribute.

"I think I had much more impact today in the locker room and helping out a few guys at halftime than I did on the field. If that's the way I contribute, that's great."

Golazo of the Weekend: Laurent Koscielny's overhead kick in Arsenal's 2-1 victory over Southampton. Watch it here:

Poll: Who will win Manchester derby?

Who do you think will win?

Posted by Michelle Kaufman at 11:35 AM in International Pro Soccer, Sports | Permalink | Comments

Cristiano Ronaldo: Plastic surgery, or not?

There's been much debate in recent years whether the Best Soccer Player in the World is Lionel Messi or Cristiano Ronaldo. Here's another question up for discussion, after seeing his face over and over during the Euro 2016 final: Has Cristiano Ronaldo undergone plastic surgery? He certainly looks different than he did as a kid at Manchester United. Clearly, braces helped his crooked teeth. But has he had more done? Nose job? Botox? Or has his face just evolved naturally as he matured? Examine the photos and vote in the poll below.... 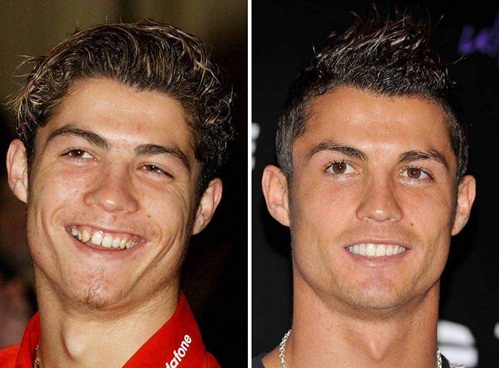 Miami was tuned in to Copa America!

Univision just released its ratings for recent Copa America matches, and one thing is for sure: Miami was watching!!

The final drew 6.8 million viewers, making it the most-viewed soccer match on Univision since the 2014 World Cup Final, and outdrew all NHL matches, including playoffs, as well as all MLB matches across all networks thus far in the 2016 season.

Sitting here on a Monday afternoon, wondering: Is Iceland REALLY beating England 2-1 in a Euro 2016 knockout game? Whaaaaaat? Iceland? A nation of 330,000 (would rank 58th among US Cities) is beating a nation of 51 million? WOW! Some clever Iceland fans were shown carrying a banner that read: "Brexit, Volume 2!"

Was I hearing things, or did Lionel Messi say late last night that he is retiring from the Argentine national team? Apparently, that is what he was contemplating as he sat all alone on the bench, staring ahead, after Chile's dramatic penalty shootout win in the Copa America Centenario final. Messi, who rarely misses in penalty kick shootouts, missed Argentina's first attempt against Chile, and hid his face inside his world-famous No. 10 jersey. Three major finals in a row -- 2014 World Cup, 2015 Copa America, 2016 Copa America Centenario -- and no trophy for La Albiceleste.

The five-time FIFA World Player of the Year, 29, has won eight La Liga titles and four Champions Leagues with Spanish club Barcelona. But his only major title in an Argentina shirt is Olympic gold at the 2008 Games.

This is what he told reporters after the loss to Chile:

"For me, the national team is over. I've done all I can. It hurts not to be a champion.

"It's been four finals, I tried.

"It was the thing I wanted the most, but I couldn't get it, so I think it's over.

"It's very hard, but the decision is taken. Now I will not try more and there will be no going back."

Time will tell if it was just emotions talking, or if he'll follow through.

If he does, it would be a crying shame. Despite criticism from dissatisfied Argentine fans, Messi is, quite simply, the best player in the world right now. He scored five goals in this Copa America Centenario, including a brilliant free kick in the 4-0 semifinal win over the United States. That goal was No. 55 for him, giving him the all-time record over Gabriel Batistuta.

The debate about Who is Argentina's Best Player of All Time will continue. Many say Diego Maradona because he was able to win a World Cup. Messi, despite all his individual and club accolades, has not been able to bring home trophies for his country. And, for that, he clearly feels awful. He feels far worse than any of the fans who have been vilifying him, that's for sure.

Maybe his threat of retirement will make Argentine fans appreciate him more. Some newspaper covers indicated as much Monday: 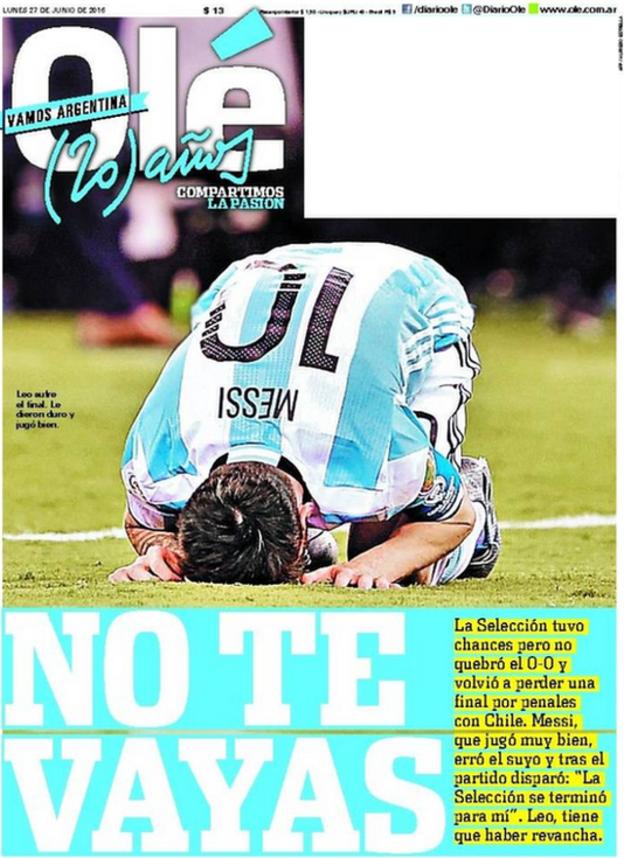 Meanwhile, other players said they hope he reconsiders.

Argentina and Manchester United goalkeeper Sergio Romero said: "I think he spoke while he was heated, because a beautiful opportunity escaped us," said Romero. "I can't imagine a national team without Messi."

"There are several players who are evaluating not continuing with the national team. It is the worst defeat ever, worse than the two other finals. So the thinking is it might be time to make room for other players."

If anybody should be criticized for Argentina's losses in recent big games, it should be Higuaín, who blew a 1v1 chance against Chilean goalkeeper Claudio Bravo Sunday night, and also missed a chance against Germany at the 2014 World Cup final and a penalty kick against Chile last summer.

But for now, all the talk is about Messi and his possible "Mexit"

Who will win tonight? USA or Argentina?

Who will win Copa America Centenario?