Beyond the commitment: OL Malcolm Bunche

When it comes to recruiting, most of the information that ever really gets out about the high school player being brought into a signing class are the basic nuts and bolts. Position. Height. Weight. 40-time. Star count. Ranking. Along the way, we get some sort of an evaluation and hear footnotes. Questions might be raised about academics. We'll hear about his visits and if there is a chance he might not stay committed. And, finally, someone will try and tell us how long it might take before this recruit will be able to make an impact.

A lot more obviously goes into recruiting than that. Before coach Randy Shannon walks into a family's living room to deliver his home run sales pitch, his assistants do their research. When Clint Hurtt or Micheal Barrow stand on the sidelines at practices or at games, they are looking for more than just effort and big plays. They want to know about his character. They want to know: How does this recruit interact with his teammates? Is he a leader, a good follower or is he a selfish player? What are his eating and preparation habits? Does he work hard in the classroom and the weightroom? Is he a knucklehead? Can I trust him? Is he smart or are we going to have to babysit him?

The Miami Hurricanes picked up the 20th commitment of their 2009 class Monday night from Newark, Del. offensive lineman Malcolm Bunche. He became the fifth offensive lineman to pick UM, an important need for the Canes in this class. Look anywhere online, and you can find out Bunche is 6-5, 315 pounds, plays offensive tackle and is rated a 3-star recruit by both Rivals and Scout. Monday night, I went in search of a little more beyond the commitment. Unlike most of the players in South Florida whom I do get a chance to watch with my own eyes, I've never seen Bunche play. So, I'm not going to speak to his abilities. But I will share what I learned after talking to Malcolm, his mother Melinda Henry, and his coach Butch Simpson.

> Malcolm Bunche is more than a football player and All-State selection from Delaware. He's a 17-year old kid (he just turned 17 in October) with some pretty good athletic genes, who plays basketball and most recently took second place in the shot put at the Delaware State Track and Field championships. His family takes health and personal fitness extremely seriously.

His father Curtis Bunche was a defensive end and eighth round pick out of Albany State (Ga.) to the Philadelphia Eagles in the 1979 draft. He spent a few seasons in the NFL before playing in the USFL with Chicago Blitz and then in the CFL. He's been an assistant coach Newark for two years. Malcolm's older sister Cetera was a long distance cross country and track runner at Hampton University, who eventually became an assistant coach Jacksonville University. His mother, Melinda Henry, is now a personal trainer and recently began competing in power lifting events at age 50. Henry won four gold medals at the Florida State championships in December (most in the bench press) and will compete here in Miami in the national championships Valentine's Day weekend. 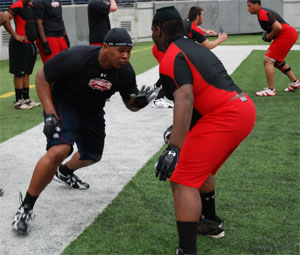 Malcolm, who lives and trains with his father in Newark, has developed the same workout traits as his family. At 320 pounds, he has 16 percent body fat (FYI, Antonio Dixon came to UM at over 30 percent). Simpson said he warms up with 225 pounds (what players bench at NFL combines) and reps it 19 times without a breaking a sweat. Bunche said he benches 400 pounds, squats a little under 500 and power cleans 220 (Check back to my Andreu Swasey blog if you want to compare). Simpson said Bunche is always on time at 3 p.m. in the weight room Monday through Friday and takes weekends off.

As for his nutrition, Bunche said he takes his eating seriously and said he will only go out for fast food once a month when he wants to treat himself. "With my dad, we're always eating steak, fish, salmon, tilapia, chicken, mixing in power bars and muscle milk," Bunche said. "We also drink this really bad vegetable juice to flush out the system. I've always been taught if you take care of your body, your body will take care of you."

> Before his visit and before his gut told him commit to UM Monday, Bunche committed to Rutgers last summer. He said Hurricanes coaches -- especially offensive line coach Jeff Stoutland -- did a good job convincing him to take UM seriously. When he made his visit to UM this past weekend he came with more than just mom and dad. His sister and his uncle were along for the ride too. The Bunches said what caught them instantly was the family atmosphere.

"I didn't know Malcolm had met Coach Stoutland before, but what caught my eye was how he was interacting with him, pushing him around, tugging at him, like we do," Henry said. "It was really a great bonding experience. Malcolm hit it off right away with all of the other recruits. So much so, he made sure to call his quarterback [A.J. Highsmith] first he was committing. It's funny, even the mom's got close. I was even sharing a cheesecake with A.J.'s mom and I had just met her."

The trip had plenty of highlights for Malcolm and his family, including some nice dinners with other recruits. His first night, Malcolm said he had the Chicken Cordon bleu. The second night he had lobster tails and steak. He said he was so impressed by tour guide Orlando Franklin, he returned home and told his girlfriend he's thinking of shaving his head for a mohawk cut, too. But as good a time as the family had, what made the visit special according to Malcolm was the half hour of one-on-one time he spent with Shannon. "He was sincere in everything he said," Bunche said.

Henry said Shannon had already gotten to her when she came in for the unofficial visit with Malcolm last sumemr and said she was blown away when Shannon stepped up to his dry erase board and began diagraming his offensive line and exactly where he thought Bunche could fit in (right tackle) and showed him how he could come in and immediately help. As for Ms. Henry? She's ecstatic her son is going to be a Cane. So much so, she's already joined the First Coast Canes Club in Jacksonville. "All I know is I'm getting a new Saturn," Henry said. "and it's going to look so hot in Orange."

> Simpson, who has coached his fair share of talented players including former Canes defensive tackle Orien Harris, said he believes Bunche will eventually find his way to left tackle because of his quick feet and his strong upper body. Bunche's physique reminds Simpson of Orien's older brother of Kwame Harris, a former first round pick of San Francisco 49ers.

"The best thing about Malcolm is he's still a baby and his best days are ahead of him," Simpson said. "He's not just a big high school kid who is going to have to learn how to make adjustments. He can play. When coaches come in here and see him walking around in a tank top and shorts, they say to me coach this guy could be a fourth-year junior. He's going to need a little time to get adjusted to the speed. But he's got great passing blocking skills. I know he'll learn quickly."

> Bunche already has learned something quickly -- developing friendships and bonds with other recruits. Not only has he reached out to other recruits, but he said he plans on calling a few on the fence. No. 1 on the list? Running back Bryce Brown. "I've got Bryce's number, but I haven't had a chance to hit him up yet," Bunche said. When I call him up I'm planning on telling him I want to block for him, help him get his 3,000 yards and win the Heisman trophy. I know want him to know we all want him here."