Time is ticking and with National Signing Day approaching quickly, Randy Shannon and the Miami Hurricanes are taking their final shots at adding some of the nation's best players to their 2009 Signing Class. 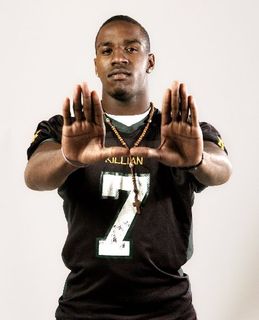 I spent all day Thursday trying to catch up with the recruits themselves, their coaches and reporters who cover them to see how serious a chance Miami has at landing their signature on signing day. I did the same with the kids who have been on the fence (visiting other schools) or already visited UM, but have continued the recruiting process. Here's a checklist that hopefully will prepare you for what is going to happen over the next few days.

THE TARGETS
UM has flirted with a lot of kids throughout the recruiting process and plenty of big names have been thrown out there as players the Canes may have a shot at. With five days left before things start becoming official, the following players are the only non-committed players I think Miami has a shot at.

> LB Sam Barrington, 6-2, 220, Jacksonville Parker: Took his final recruiting trip to UM on Jan. 23 and told his coach Jim Scible, whom I spoke to Thursday night, that he really enjoyed his trip. Miami coaches are done with their visits to Barrington and now must wait to see if they've done enough to win him over against Illinois and South Florida. Scible said Illini coach Ron Zook was in Jacksonville yesterday and watched Barrington coach a girls' Powder Puff game at his school. "It's funny the things adult men do to get their players," Scible said. Barrington is expected to announce his decision on Tuesday night during a party at a Jacksonville night club (No, I won't be there). UM's chances: Very good. Before I hung up with Scible, he told me he was going to be expecting a call from me next week. Maybe, he gave it away?

> OL Marcus Hall, 6-5, 295, Cleveland (Oh.) Glennville: Hall visited Miami on Jan. 23 and told nearly every national recruiting website it was going to be his last trip. Turns out, according to Glennville offensive coordinator Matt Chinchar, Hall isn't done yet. He's visiting Tennessee this weekend. The U.S. Army All-American definitely enjoyed his trip to South Florida and has told everyone close to him he's really considering the Canes. But he was also seriously considering Michigan not that long agom too. And now, his new flavor of the week is Tennessee. UM's chances: Slim. You would like to think you could take a kid for his word, but in this case I get the sense Hall is playing some games and telling people (reporters and friends) what they want to hear. The truth is, the only person he really wants to make happy is his mother. And mom wants him at nearby Ohio State.

> OL Andrew Tiller, 6-6, 330, Nassau (N.Y.) Community College: Baby Huey has long had Miami in his top three along with Syracuse and Rutgers. Miami will get their shot at him this weekend and will have the South Florida Sunshine and plenty of playing opportunity to sell. But unless Miami does an unbelievable sales job, Tiller is going to be playing for Syracuse come the fall. His former JUCO coach, John Anselmo, was hired as the secondary coach by the Orange. UM's chances: Not good. Tiller can tell reporters whatever he wants, but don't you think his former coach is going to be under tremendous pressure to make sure Tiller is with the Orange next year? He'll say distance is a factor. But we'll know the truth.

> OL Peter White, 6-5, 325, Washington (DC) St. John's Prep School: Of the remaining offensive line recruits UM is chasing to try snatch, White is the player I think the Canes have the best shot at. The Under-Armour All-American has been to Maryland and Tennessee and is making the visit with his parents this weekend (a great sign). His coach Joe Patterson said UM coach Randy Shannon had a great in-home visit with White earlier this week and impressed his parents. UM's chances: Very good. Maryland and Tennessee are closer to home, but as Patterson pointed out, White is looking for a private school environment and an opportunity to play early. Miami offers both of those up big time. Look for a possible White commitment on Sunday or Monday. Patterson told me he won't wait until NSD.

> OL Quinton Washington, 6-4, 320, Timberland High, St. Stephen's S.C.: After being offered by Miami early on, coach Art Craig told me Thursday night the Canes disappeared on Washington. Part of the problem was Washington's primary recruiter was former offensive coordinator Patrick Nix. Clint Hurtt took over the recruitment in December and moved UM into Washington's top five (they weren't in it originally). "He's interested not necessarily because of what they did recruiting, but becasue of the allure of the school," Craig said. "You say University of Miami to a kid and their ears perk up." Washington doesn't do many interviews because he has a speech impediment, but his coach says part of it is because he is a no non-sense guy. After his trip to Miami this weekend, he'll decide between the Canes, Michigan and South Carolina and we'll probably find out where he's going by Monday at the latest. UM's chances: Slim. The fact Miami is getting his final visit helps, but after speaking with longtime South Carolina recruiting writer Billy Baker, I've been told Washington is a Gamecock lock. Coach Steve Spurrier has targeted five offensive lineman in this class (and Washington is the last piece). Plus, Craig works South Carolina football camps in the offseason. Something tells me Mr. Spurrier is going be upset if Quinton goes elsewhere. 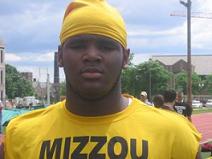 > TE/DT Sheldon Richardson, 6-4, 280, 4.7, St. Louis Gateway: Richardson has been committed to Missouri for a very long time and told local reporters thought he was done with his recruiting back in December. But UM coaches have continued to put the pressure on Richardson to give the Canes  the school he grew up dreaming of playing for) a chance. He is supposed to be doing that this weekend with an official visit. I tried calling Richardson several times tonight to confirm it was still on, but could not reach him. Richardson is definitely intrigued at the possibility of playing tight end (which looks even better now with Dedrick Epps out).
UM's chances: Decent. I was told UM definitely feels like they've got a great shot at stealing one of the nation's top players late in the game, but there is no way it will happen without a visit. Ultimately, Miami is not only going to have to impress Richardson, but his family, too. His mother wants him close to home. The final hurdle ultimately could be academics. I was told by a St. Louis reporter Thursday Richardson might not have his test scores or grades and might end up in prep school anyway. Either way, expect NSD drama on Wednesday if he makes the trip to UM.

> TE Terrell Mitchell, 6-5, 230, McEachern High, Powder Springs, Ga.: I told you all last week Mitchell was going to be Plan B. It still looks that way. He is not scheduled to visit this weekend and could hold off on his NSD decision. His coach Kyle Hockman told me last week Mitchell had some academics to take care of. Unless he does, I can't see how he signs with the Canes: UM's chances: Good, but... Georgia dumped Mitchell and Arkansas and Missisippi State seem to be the only horses in the race. Still, academics appear to be a major problem. I can't see Miami taking him.

> OTHERS TO KEEP AN EYE ON: Miami hosted two other offensive linemen back in December -- Bobby Massie (6-6, 330) and Daniel Campbell (6-5, 320) from Hargrave Military Academy in Virginia. I've tried numerous times reaching their coach Robert Prunty and have come up empty. But word I've received from others is Massie is likely going to the SEC (Alabama or Mississippi State) and Campbell has disappeared off the face of the earth since his UM visit. From my conversations with UM insiders, it's doubtful any of them come to UM.

> SCRATCH THEM FROM THE LIST: Receiver Andre Debose (sticking with UF, but visiting FSU this weekend), cornerback Greg Reid (consider UM nothing more than a flirtation, my people tell me he's headed to Florida State), linebacker Tana Patrick (no longer considering UM), linebacker Greg King (needs a test score and is likely headed to the SEC anyway) and tight end Billy Sanders (guess he's not going to take that last minute trip to UM after all).

COMMITTED GUYS TO KEEP AN EYE ON

> CB Kayvon Webster, 5-11, 181, Monsignor Pace: If you listened to WQAM on Thursday night you probably think there is no way Webster is going to Miami, especially the way he talked about South Florida and West Virginia (who have continued to recruit him). But when I spoke to Webster over the phone moments later he sounded totally different, like someone who was enjoying getting people nervous. He said he expects to come in and play cornerback at Miami and plans to have a fun weekend with Randy Phillips while other recruits visit the Canes. I expect Webster to choose the Canes when he makes his announcement at Pace at noon on Wednesday.

> DT Luther Robinson, 6-3, 280, Fort Pierce Westwood: Robinson took a couple of trips to Florida and UCF over the past couple of weeks and has his final trip lined up for the Canes this weekend. If he wasn't taking it, there might be reason to be nervous. But Robinson sounded to me like someone who just looking and I suspect some of this might have been to create a little excitement on NSD. I'd be very surprised if he didn't ink with the Canes Wednesday.

> CB Jamal Reid, 6-1, 175, Mayo Lafayette: Reid took a midweek trip to Mississippi State to visit with former Gators assistant Dan Mullen. They are definitely trying to sell Reid on the fact he could play both ways, something he could probably pull off there. When I spoke to Reid last week about what he would play at UM he talked about playing anywhere on the field. I know getting a shot at receiver, which he played mostly in high school, intrigues him. Miami coaches might need to promise him that this weekend to avoid a signing day surprise.

> RB Bryce Brown, 6-0, 215, Wichita East (Kan.): No, the nation's No. 1 recruit won't be signing anywhere Wednesday. But I still believe he will end up being a Hurricane in the end. Offensive coordinator Mark Whipple paid him a visit this week and Brown is taking things slow. There are rumblings he could take a visit to Auburn in the next couple weeks. If he does, it will just be more drama to follow. Frankly, I'm convinced that is all this is. Look for Susan Miller Degnan's feature on Bryce in the paper in the coming days for more details.