Jacory Harris readying for 'hulk' of a role 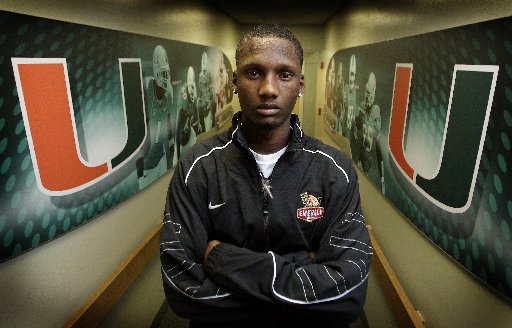 Jacory Harris joked with reporters Wednesday, telling them to prepare to see the Incredible Hulk take the field next fall. Harris definitely didn't arrive at college looking like The Hulk. As a freshman, he was not even supposed to be doing much more than helping Robert Marve in a backup role.

But Wednesday, a little more than a year after he first began taking classes at the University of Miami, Harris was standing in front of the media with a bigger role than most expected him to have this early in his career. He is no longer Marve's backup, no longer Plan 1B. He is the man -- and in a way much bigger than many other Canes quarterback before him. Harris, who will turn 19 in May, is now the leader of this team. He is the voice in the locker room, the huddle, the one his teammates will turn to when the tough gets going from now on. He is the guy shouldering the hopes and dreams of Canes fans, who are tired of the losing and starving for success. And the truth is he'll have to be as strong as the Hulk to carry the weight.

"To be the starting quarterback at the University of Miami is every kid's dream," Harris said. "You grow up watching UM on TV, the swagger they had, the NFL players the have. It's something so special that you want to be a part of it. I'm happy I am."

conference. His dreams (winning championships). His weight. His injured shoulder. His friends Patrick Nix and Robert Marve (he said he was surprised both left). What he hopes Miami gets in its new offensive coordinator. What he tells visiting recruits about the future at Miami. How he really felt last season while sitting behind Marve. What went wrong at the end of the Emerald Bowl (he called it a case of miscommunication). Here are some of the highlights.

> First, his health. Harris told us Wednesday he expects to be fully healthy for the start of the spring (it looks like Feb. 24 will be the day). As we all suspected, he did re-injure his shoulder on the final play of the first half in the Emerald Bowl. Harris, who has been going to rehab 2 to 3 times a day, reassured us that while he still feels it a little bit "I've got my regular strength back. I'm 100 percent for the spring."

> As for his height and weight, Harris said people have been telling him he looks a little taller, but he hasn't measured himself. He did weigh himself, though, and said he's up to 186 pounds from 176 at the bowl game. He said by the start of next season he would like to weight at least 190, 195 pounds. He would like to leave UM (after he gets his degree) weighing 215.

>  In regards to UM's offensive coordinator search, Harris said he has remained in contact with coach Randy Shannon on a regular basis and that he puts all his trust in Shannon. Ultimately, Harris said, all he wants is someone who will help him get to the NFL, "whatever style of offense" it takes. As for having to learn a new offense, Harris doesn't expect it to be too hard.

"It wasn't a problem for me last year," Harris said. "I learned the whole playbook in the spring. Summer and two-a-days was there to sharpen my knowledge. My role will be a teacher - I was a teacher this year too. I've got a lot in my small head. I'm a visual learner, so if you put it on the board I'll learn it."

> Harris admitted he's been a bit concerned while the Hurricanes have been undergoing major changes on its coaching staff. But he said he's done a lot of thinking and has come to the idea coaches aren't what make up a program, rather it is the players. And that's the message he has been delivering to recruits, who have voiced their similar concerns to him. 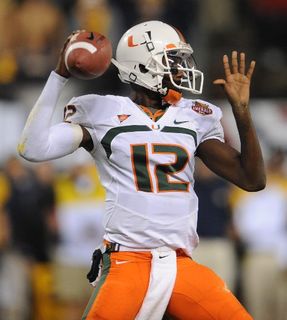 "I really don't think we're starting over because the nucleus of the team is here, and that's the players," Harris said. "I'll [the recruits] you can't worry about this coach here, this coach there, because if that coach has a down year and the school decides to fire him then you'll be with a different coach the next four years. You got to decide based on the coaches that are there, have fun with the player and whatever vibe you get from the players that's what school you should go to. That's how I picked my school, whoever I was most comfortable with."

> As for the two-quarterback system, consider Harris happy it is over with. Harris shared a story with reporters about how he was a bit down with the situation before the Duke game last year. He said his performance helped lift his spirits. "I learned you got to put your ego behind you," Harris said. "Even though I didn't start the next week, I knew I helped us win the game. I played and was able to win a game for my team and that's all I wanted to do."

> As for his backups, Harris had nothing but glowing comments. He said he watched Taylor Cook and Cannon Smith at times compete with the scout team last year and came away impressed. He plans to be supportive in helping them each come along. He said Cook has the strongest arm of any quarterback "He can probably throw the whole football field," Harris said.