What we're hearing: The OC search

Is there any news on the offensive coordinator front? Do we know who has been interviewed or contacted?

In short, my answer is no. I have nothing concrete from anyone at UM. Randy Shannon has always been somebody who keep his thoughts close to the vest. What I do know is the vacancy could be filled by Friday. Here is what I'm hearing in terms of candidates along with what is being reported by others across the country. 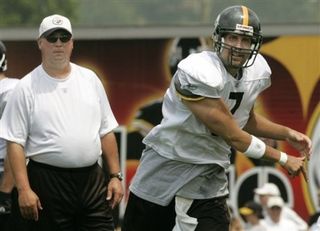 > From conversations I've had with sources, the No. 1 guy on Shannon's OC wish list has been Eagles offensive assistant coach Mark Whipple. The former coach at UMass won a I-AA national title and has a Super Bowl ring as Ben Roethlisberger's position coach in 2006.  Whipple, 50, has spent his entire coaching career in the Northeast (except for one season with the Arizona Wranglers of the USFL in 1984). That reason, and because he's now been in the NFL since 2004 (once you move up you rarely see guys move back down to college) makes me believe he'll likely pass -- or has passed -- on the job. Also of note, an early morning report Wednesday out of Philadelphia said Eagles quarterbacks coach Mark Shurmur is leaving for the Rams offensive coordinator job. Whipple could become his replacement in Philly.

> I've been told the new top candidate is Rutgers offensive coordinator John McNulty. I received a phone call Tuesday night from a friend very deeply connected in the coaching circles who said McNulty has been offered the job at Miami and is now mulling it over. McNulty, 40, previously interviewed for the UM job in 2007. He passed and returned to Rutgers with a pay raise. Last year, McNulty interviewed with Nick Saban at Alabama and returned to Rutgers again.

From what I was told, McNulty passed on the UM job the first go around because of the lack of talent on the offensive side of the football. Now, he likes what he sees (except for the offensive line). McNulty apparently would like to bring assistant coach Kyle Flood with him. Rutgers gave up the fewest sacks in the nation under Flood in 2007 and 2006. As for McNulty, Rutgers set school records for total offense (5,841 yards), points scored (421) and first downs in his first full season in 2007. The Knights also became the first Bowl Subdivision team to boast a 3,000-yard passer, a 2,000-yard rusher and two 1,000-yard receivers in the same year.

> Other names have popped up aside from those two. The ones who might appear to have some substance are former Minnesota and Syracuse offensive coordinator Mitch Browning, Cleveland Browns quarterbacks coach Rip Scherer, former San Diego State coach Chuck Long and Ron Prince, formerly of Kansas State. Long told The Miamih Herald he has had no contact with UM. Browning is apparently considering joining Lane Kiffin's new staff at Tennessee and Prince will likely end up in the NFL. Scherer signed a deal to be the quarterbacks coach with the Carolina Panthers Tuesday.