« Economy hurting Canes too | Main | Days of Our Bryce update »

The news coming out of UM never seems to take a break does it?

The Miami Hurricanes have a new guard who will be part of their 2009 signing class. And coach Frank Haith and his staff are hoping hard he turns out to be a lot like the one leaving after this season -- Jack McClinton. 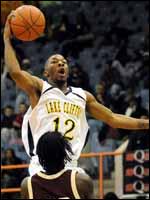 Say hello to Antoine Allen, a 6-2, 186-pound combo guard from Mississippi Elite Christian Academy. Allen isn't another ESPN Top 100 recruit like the other two guards part of Haith's next class. But he's another good under the radar player from Baltimore, who just happened to play for the same AAU program McClinton did.

I caught up with Cecil Kirk coach Anthony Lewis, who coached both players, a few hours ago. His take in a sentence -- Allen is better defensively than McClinton was at 19 and just as good a shooter as he was, too. Allen told me he is averaging 23 points, 7 rebounds and 6 assists at his prep school, which takes on other prep schools and junior colleges. He can play either point guard or shooting guard (like Jack) and can light it up from three-point range.

The good news is he apparently has the same work ethic as McClinton, which is probably the most important trait. "The one thing I asked coach was is if they had a 24-hour gym open for me," Allen said. "I'm a guy who loves to be in the gym at all hours, working hard. That's me."

> Allen is expected to sign in April and will start at Miami in the fall. He'll be one of four new guards on the team along with Malcolm Grant, who should be UM's starting point guard next season, Durand Scott and Garrius Adams. James Dews is the only guard expected back next season.