« Questions abound for UM baseball at start of '09 | Main | Is Bryce's offer to The U getting pulled? »

Baby J: "Whipple gave it to us raw"

With a week to go before the start of spring practice we got a chance Tuesday to hook up with three returning veterans -- offensive lineman Orlando Franklin, running back Javarris James and defensive lineman Allen Bailey. We learned a lot about injuries, transfers, potential spring battles -- and more importantly -- how The U's two new coordinators have begun to interact with their players. 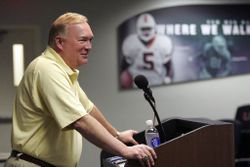 Here's what we know: Offensive coordinator Mark Whipple has made an impression. According to his players, he isn't going to stroke any of them and let them live off the past. According to James, Whipple's first meeting with the team wasn't full of pleasantry. It was all about getting down to business.

"He's a straight-on guy," James said. "He gave it to us raw. He kind of put us in our place, said a few words in the meeting that caught us by surprise. It was like tough love. That's different from what we were used to. We know this guy came here to win. That's what he's been used to."

The same way defensive players have begun studying their new playbooks this week, so too have offensive players. James told us receivers have been walking around excited, talking about the new routes in Whipple's offense. James said there are also new reasons for the running backs to be excited.

"It's great for us," James said of the playbooks' design for running backs. "It gives us the opportunity to get in the open field, get the ball one-on-one, line us up against linebackers. The whole offense - it's a tough offense to learn, but once we get it down all of us have a lot of confidence in coach Whipple. It's really a pro-style offense. You have different terminology to learn. But it's not too bad. Once you get a feel you'll be fine. The offense is going to be fun for us. It's a lot of different from what I've been used to since I've been here. I really expect big things from the offense."

James said the offense has a lot more it asks of running backs to do -- especially in blocking schemes. "The things you see guys in the NFL doing -- pass blocking, catching the ball out of the backfield -- that's what we'll be doing. You have to be the quarterback's eys as far as protections. You have to look at the safeties, pay attention to it all."

OFFENSIVE LINE IN FLUX: Without question, UM's offensive line is going to be the area where the most competition and movement will take place. We learned a few new things Tuesday about the line. One, it looks like offensive guard Joel Figueroa could miss signinficant time this spring. Two, senior Chris Barney has apparently decided to transfer (he hardly played at all in his career at UM).

Figueroa, who started in four games last season as a sophomore, had surgery according to his teammates. He was seen walking around campus Tuesday with his arm in a sling. It's unclear when he'll return. But when he does, he'll likely be back at guard.

In his absecne though we learned redshirt sophomore Harland Gunn will see time with the first team -- a good sign for a player who has spent two years developing on the scout team. Gunn came to UM ranked the eighth best center in the country. Teammates say Gunn is expected to be pushed by prep school recruit Brandon Washington.

Center, the position vacated by Xavier Shannon, will come down to a battle between A.J. Trump and Tyler Horne. Trump played a lot of backup center last season during practice, especially when Shannon was out on Wednesdays because of class.

Left guard still belongs to Orlando Franklin, who made 10 starts there last year. But Franklin said Tuesday he's been told he'll get a shot at right tackle (a position I believe he will be moved to permanently) two weeks into the spring. Franklin said junior Ian Symonnette is currently backing him up at guard. Left tackle of course is being manned by veteran Jason Fox and prep school recruit Jermaine Johnson.

Franklin said he finished last season weighing 337 pounds. He said he's already trimmed himself down to 328 and said he would like to weigh 318 when the season begins so he can be lighter on his feet. Still, weight isn't the only thing Franklin said he'll be working on. He said he was disappointed with his season last year and wants to improve his technique.

"Technique wise I feel like I grew up a lot," Franklin said. "But I didn’t feel like I dominated people like I needed to. I just want to be that guy. Fourth and 1, there shouldn’t be any questions asked where they’re running the ball. But they passed the ball sometimes. That shows you something." 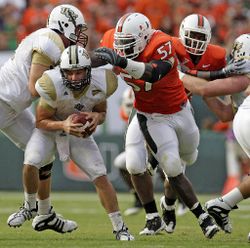 A MOVE INSIDE FOR BAILEY? The Canes defensive line obviously has less holes to fill and fewer questions. One question, however, that might not get answered this spring is where Allen Bailey's future is at. Is he going to be an end (where he played primarily last season) or is he going to make the move inside to tackle (where he played on third down situations)? Or will he just play both?

Bailey sounded Tuesday like coaches may ask him to move inside more often this year because of "the youth in the middle." Bailey said he can take the physical play inside (he's now up about pounds to 289-290), but he prefers playing on the outside."It’s way different than the end position," Bailey said. "You are in close quarters with everybody right there in front of you. You have to react quickly. It’s a little bit of a battle. I’m not a typical d-tackle, so there are some advantages."

Bailey said he's working at right tackle with Joe Joseph behind him. The left side is being manned by sophomore Marcus Forston and Josh Holmes. He said he expects redshirt freshmen Micanor Regis and Jeremy Lewis to contribute this season along with true freshman Curtis Porter. It sounds like left defensive end will be manned by Eric Moncur and Bailey. Sophomore Marcus Robinson, junior Adewale Ojomo and freshman Olivier Vernon are expected to rotate on the right side.

Bailey shed a little light on new defensive coordinator John Lovett's schemes."Seems like the defense will be a little easier," Bailey said. "No dropping back into coverage for the ends. It will be more basic stuff. It will probably allow us to do more rushing for the ends."