Newspapers, car dealerships and every other business in America aren't the only ones worried about economics these days. Consider your Miami Hurricanes high on the list of collegiate programs pinching pennies and looking for new ways to survive.

Athletic director Kirby Hocutt met with the media Tuesday to discuss UM's new ticket pricing plan for the 2009 football season. And surprisingly, nothing is going to cost you more money if you head to Dolphin Stadium. In fact, things are going to get a little cheaper.

Hocutt unveiled a plan in which the school is slashing prices on about 24 sections -- most in the upper levels -- that will cut the ticket prices on about $15,000 seats. It should make U happy. What should get you a little worried? The fact your five-time national championship program isn't riding first class to games anymore. 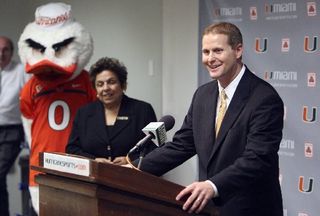 Hocutt said Randy Shannon, in an effort to help UM's struggling economic budget, has offered to take chartered buses to two road games next season instead of chartered flights. OK. It's probably not that big a deal when you consider its USF and UCF. But it's yet another sign of how cash-strapped the Canes are compared to some of the elite programs in college football.

In case you missed the article, USA Today ran a piece Tuesday with Gators athletic director Jeremy Foley talking about how he was worried the Gators might have to make a few cutbacks here and there. UF's athletic budget is $85 million this year. The Canes? $60 million according to Hocutt. That's actually around the middle of the pack -- about where the football team has played the past three seasons.

So, where do the Canes stack up to other football monsters? According to a Bloomberg report, Ohio State manages the biggest athletic budget at $115.4 million. Texas is not far behind at $101 million.

> For those of you wondering if UM will nix its plans to rename Mark Light Stadium in honor of Alex Rodriguez this Friday, guess again. Hocutt said despite A-Rod's admission to using performance-enhancing drugs, the Canes will still honor him. "Our event Friday night is going to proceed as scheduled," Hocutt said. "Alex Rodriguez has been a very generous supporter to the University of Miami and its athletics program. We're looking forward to our event."