« Recruiting picture starting to clear up | Main | Epps: 'I'm not going to miss the season' »

Good morning Canes fans. Today is National Signing Day. Or, as UM recruiting coordinator Clint Hurtt once told me, Report Card day for him and the University of Miami coaching staff. It's the day all the hard work they've put in chasing after high school seniors becomes official or unofficial.

As many of you know, the Hurricanes had a collection of 20 commitments before the final 48 hours before NSD began Monday morning. After last night, they still do. Several recruits out-of-state recruits who visited UM the past two weekends have already decided they are passing on the Canes.

Last night, Jacksonville Parker linebacker Sam Barrington became the latest when he stunned friends and family by choosing the USF Bulls over the Canes and Illinois. Others did the same before Barrington. Cleveland offensive lineman Marcus Hall chose Ohio State. And more could end up doing the same. We just don't know yet. 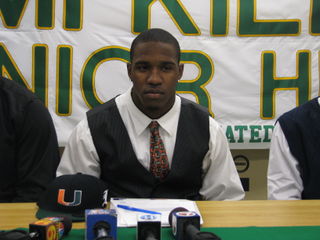 Throughout the day, The Miami Herald will have reporters and correspondents following recruiting. I'll be on the road at Miami Killian for Lamar Miller's announcement at 10 a.m., Miami Pace for cornerback Kayvon Webster at noon and coach Randy Shannon's press conference at UM at 2 p.m. But reporters will be checking in with me to provide updates on other potential Canes and we will post stories online as soon as we get them. I will try to update the blog as much as I can while I'm on the road.

Here is a schedule of key recruits for you to follow with a few notes...

> OL Peter White, St. John's College Prep, Washington, D.C.: White is expected to announce his decision at around 8:45 a.m. There were rumblings late Tuesday night he had already told coaches at Maryland he was headed there. White visited UM last weekend and was also considering Tennessee. We'll have reporter there to send a story. UPDATED at 9:01 a.m.: White has chosen Maryland. Check for a story shortly.

> OL Andrew Tiller, Nassau Community College: The big 6-6, 330 pound tackle prospect is supposed to make a decision from his home around 9 a.m. I've got his phone number and will try to find out what happens shortly after he decides. UPDATED 12:01 p.m.: Rivals.com reports Tiller has chosen Syracuse.

> DL Luther Robinson, Fort Pierce Westwood: His coach Waides Ashmon told me to expect an announcement at 9:30 a.m. Robinson made a few visits to Florida and UCF, but is said to be expected to sign with the Canes. We'll find out soon enough. I'll call Ashmon for an update and interview if possible afterward. UPDATED at 9:58 a.m.: Robinson sticks with the Canes. I'll have an interview later today.

> CB Kayvon Webster, Monsignor Pace: I'll be at Pace at noon when Webster makes his announcement. There have been reporters Webster is still not 100 percent convinced on UM and is still considering USF. I'm not buying. I think Webster picks UM in the end. UPDATED at 12:31 p.m.: Webster spurns the Canes and shock the world by picking USF. He told me he made his decision about an hour before coming in. He said early playing time was the biggest factor. I believe the fact two of his Pace teammates are a bigger reason -- WR Sterling Griffin and WR Derrick Hopkins.

> TE/DT Sheldon Richardson, St. Louis Gateway High: Reporter Nate Latsch, a freelancer for the St. Louis Post-Dispatch, will be there to provide us with a story from what could be Miami's biggest steal of this class. Richardson, a Missouri commitment, visited UM this past weekend. He's expected to make his decision at around 12:30 p.m. our time. UPDATED at 12:37 p.m.: Richardson has decided to stay home and stick with Missouri.

> OL Quinton Washington, St. Stephen's Timberland, S.C.: All signs have pointed to the fact Washington, a UM visitor this past weekend, is not headed here. It's either going to be Michigan or South Carolina. But you never know if this becomes a stunner when the official announcement is made at 3 p.m.

I said earlier, continue to check back throughout the day for updates, notes, photos and quotes from players, coaches, recruits and recruiting analysts.