Hurricanes football is back in session. Day 1 of spring practice is in the books. What happened? What was said? What did we learn about Randy Shannon's football team after getting a chance to watch them run around in shorts and helmets for an hour and a half at Greentree Practice FIeld? 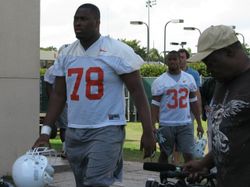 > All six freshmen who were early enrollees made their debut and did good things according to coach Randy Shannon, who said the first few days of spring practice are really intended for receivers and defensive backs to work hard while linemen and running backs wait for the pads to come on (Saturday).

Cornerback Brandon McGee, one of those six freshmen, described the day as a great experience. McGee is seeing most of his time at right cornerback behind junior Demarcus Van Dyke. McGee said he spends a lot of time going to senior Randy Phillips for advice. You can tell McGee is already fitting in just fine. During his interview, linebacker Sean Spence came by and pulled his shorts down. McGee laughed, but kept his composure and lifted them back up.

> If there is a freshman who is making an early impression consider it running back Mike James, who had sophomore quarterback Jacory Harris raving Tuesday.

"I could go into the city, go home and people will be like I can't wait for Lamar Miller [to get there]," Harris said. "I'll be like 'I can't wait for you to see Mike James.' This guy really impressed me. He would call me to come out and throw on Saturdays when nobody was out here. He would tell me I got to be like [former Georgia running back] Knowshown Moreno. He sits up there and admires everybody. He's just so hardworking and determined, he wants to make it. The man, for a freshman, is super strong. Today, he maxed out at 350 [pounds]. I forgot what he squated, but it was like 400, 500 pounds. He's a man."

> No one was a more popular man after practice with reporters than new offensive coordinator Mark Whipple, who was made available Tuesday to the media by Shannon for this one and only time (that is of course unless we decide to do a quarterback feature). Whipple didn't shed a whole lot of new information on the offense he's installing, but from what we heard from players there is definitely a lot of excitement surrounding the new offensive boss' creativeness.

For starters, they are no longer studying film at the college level. Whipple has them breaking down NFL film.

"The new playbook looks like a dictionary," Harris said. "When I first saw it, it was stacked 10 inches high. But to be honest, it's not that hard to figure out. Once you learn the concepts, everything comes into place and that playbook shrinks...

"You can definitely sense the creativity in some of the formations. It's something he was telling us is not his offense, but bits and pieces of everything he's learned from being in the NFL. That's his style." 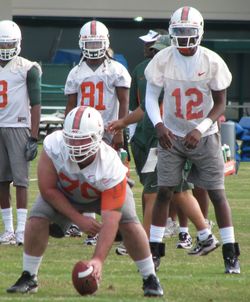 > Harris said a big difference in the way quarterbacks play in Whipple's offense is how quickly they make their reads. He said it feels more like the offense he ran at Miami Northwestern because how quickly he gets the ball out of his hands.

"It's kind of a big difference," Harris said. "If your No. 1 option is not there on your third step, you move quickly to No. 2, No. 3, No. 4. Your eyes are constantly scanning so that as soon as you see a linebacker move here or a safety or a corner, somebody is open. The ball should be out quick. Basically, I'm not there to be the one to sit in the pocket and run around. I'm just here to deliver the ball to the playmakers."

> Harris (who separated his shoulder at the Emerald Bowl) told us he's still experiencing some slight pain in his throwing arm and has continued to participate in rehab twice a day. Tuesday, he was wearing a long sock taped to his arm. But that was more for style than protection. Jacory by the way is up another three pounds and says he weighs 189.

"Basically, I've been taking protein shakes and eating more," Harris said. "I don't have classes on Tuesday and Thursdays, so I go to the MLK restaurant on NW 62nd and 27th Ave. I go down there and get a big breakfast, come back go to sleep and go to meetings. I'm eating a lot."

> As expected, Harris took all of the snaps with the first team Tuesday and looked solid in a variety of drills, getting the ball quickly to his receivers, tight ends and running backs out of the backfield. He was often firing the ball before receivers even made their break, which allowed them time to react to the defense in open space.

> Redshirt freshman Taylor Cook certainly looked like the more impressive the two backup quarterbacks to me. Cannon Smith (5-11) can barely see over the offensive line and at times -- I thought -- had trouble finding receivers. Cook showed me he has a strong arm, but if you ask coaches, he has a ways to go.

TOP PLAYS: UM didn't run 11-on-11 drills very long and spent most of the day working on 7-on-7 drills. There were no touchdowns, long completions or turnovers -- just like there was no real hitting. But there were a few nice plays made by Graig Cooper, Javarris James and freshman running back Mike James. Baby J brought the loudest roar to the sideline when caught a ball in the flat and made a move on linebacker Kylan Robinson, shaking him out of his shoes, en route to a big gain upfield.

WHERE THEY WERE WORKING: As far as how players lined up, there were no surprises. The first team offensive line featured Jason Fox at left tackle, Orlando Franklin at left guard, A.J. Trump at center, Harland Gunn at right guard and Matt Pipho at right tackle. They were backed up in order by freshman Jermaine Johnson, Ian Symonnette (who did look a tad slimmer), Tyler Horn, freshman Brandon Washington and redshirt freshman Ben Jones (who is wearing Xavier Shannon's old No. 55).

INJURIES: Defensive end Gavin Hardin suffered some cramps near the end of practice, but other than that there were no injuries. Receiver Kendal Thompkins and tight end Tervaris Johnson wore green jerseys to designate they could not be hit during practice since they are both still returning from injury.