« Beyond the Boxscore: North Carolina | Main | Baby J: "Whipple gave it to us raw" »

Questions abound for UM baseball at start of '09

The 2008 Miami Hurricanes had one of the best lineups in all of college baseball, a talented collection of power hitters who could light up the scoreboard and send balls flying out of the park on a nightly basis.  Barring a few unexpected surprises, coach Jim Morris knows his 2009 Hurricanes will not be that kind of team when they their new season at their newly reconstructed and renamed ballpark Friday night against Rutgers.

So what will the Canes do to win games this coming season? Morris is banking on pitching, defense, timely hitting and being the complete opposite of what his lineup was last year -- a successful small ball unit. 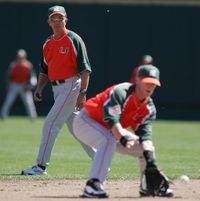 "We're not going to be a team that hits for power like last year," said Morris, whose 2008 team belted 106 home runs and drove in 517 RBI en route to compiling the fifth highest winning percentage in UM history with a 53-11 record before sputtering in Omaha. "Our team last year bunted the least of any team since I've been at Miami. This team might be one that bunts more than anybody. We got to sac bunt. We got to be very fundamentally sound. We got to play good solid defense. We’re not going to be a big inning club – unless I’m surprised."

Expecting the Hurricanes to duplicate what they did a year ago with the number of superstars who left would be insane. One look at the roster tells you all you need to know about how much work the Canes have in front of them. Of the team's top 11 hitters, only four are back. Gone from UM's lineup: 78 of team's 106 home runs and 358 of the team's 517 RBI last season.

There are several All-American candidates back: shortstop Ryan Jackson (.360, 50 RBI, 4 HRs), left-handed ace, freshman pitcher of the year Chris Hernandez (11-0, 2.72 ERA) and budding relief pitcher and newly annointed closer Kyle Bellamy (6-0, 1.86 ERA). But aside from those three, there are simply a lot of questions. Morris could not complete a lineup when asked about it on two different occassions Monday, instead giving reporters a rough draft of where some guys will likely be playing.

"This is probably the team where I have the least number of starters returning in my college career," said Morris, who had three players (first baseman Yonder Alonso, second baseman Jemile Weeks and pitcher Carlos Gutierrez) taken in the first round of the June draft and three more (outfielders Dennis Raben and Blake Tekotte and third baseman Mark Sobolewski) take on the first day.

"With that said, I keep telling myself and reminding myself when we lost [Pat] Burrell, [Aubrey] Huff, [Jason] Michael and [Alex] Santos that the next year nobody gave us a chance and we won it [1999]. That’s how I go to sleep every night. This club is like that club. It’s a very young club, even though we did have a few more veterans returning in 1999 than we do this year. It’s still exciting."

After that, it gets a little hazy. Morris mentioned senior Jason Hagerty (who could play first base, catcher or left field) next, followed by freshman Harold Martinez (a corner infielder) and catcher Yasmani Grandal in the seventh or eight spot. It looks like senior Dave DiNatale (the team's top returning power hitter with nine home runs and a .295 average) will be starting in right field. Ther other spot -- left field -- is a coin flip. Morris said senior Jonathan Weislow, used primarily as a pinch-runner last season and with six career starts, would likely get the first crack at the spot Friday. But Hagerty and senior Ryan Perry, a utility player, would also get a look.

"There’s going to be a lot of combinations to try and figure out how to get those guys in there," Morris said. "We got to get our best nine players in the lineup."

Pitching coach J.D. Arteaga seems a little less worried about his group, which obviously returns one of the best in the country in Hernandez. Despite the loss of No. 2 starter and left-hander Eric Erickson (who will miss the season recovering from Tommy John surgery), Arteaga told me he's confident UM will find somebody very good to fill his spot in the rotation.

Right now, it looks like last year's alternate starter, senior right-hander David Gutierrez, is ready to assume the role. Gutierrez went 5-0 last season in seven starts with a 4.75 ERA. "After that we have a group of freshman that I feel are going to be very good, just guys who haven’t done it yet," Arteaga said. "But the ability is there without a doubt."

“Danny Miranda and Kevin Youst are the same pitcher,” Arteaga said. “One is left handed and one is right-handed. Both have outstanding changeups. They both locate their fastball very well. Both are very competitive. The change is up what really sets them apart from other guys. DJ is a little different. He’s a left-handed power guy, who was the highest ranked left-handed pitcher in the state before he had an arm injury. We’re just getting him healthy, getting him ready. I think before they’re done they will all have very good careers here. It’s just a matter of getting them going.”

The closer's role as I mentioned earlier will belong to Bellamy. But it's not a position he has locked in. "He closed a few games last year," Arteaga said. "But it’s a big jump. Just because you had a great year as a setup guy doesn’t mean it’s going to translate. Pitching the eighth inning and the ninth inning are two completely different animals. He did it in the ACC championship game. He has done it. I have confidence he’s going to do it."

If Bellamy struggles, his most likely replacement would be newcomer and JUCO transfer Taylor Wulf. The 6-0, 235-pound junior right hander was a starter as a sophomore at Alvin Community College, but was a closer as a freshman. He has strong curve ball as a strikeout pitch and has the full backing of Arteaga. "He's got the mentality for it," Arteaga said.

> I'll have more to share with you in the coming weeks from baseball including interviews with the Canes' three biggest newcomers: the Texas trio of JUCO players, who are being counted on heavily to deliver right away. Plus, some good stuff from Ryan Jackson and Ryan Hagerty.