Each time I think about my trip to Dallas two years ago to watch Miami Northwestern take on Southlake Carroll, the first image that always pops into my mind is the one of receiver Tommy Streeter racing down the field underneath a long, rainbow pass from Jacory Harris for a touchdown. It was the highlight of one of the most impressive high school football games I've ever watched. 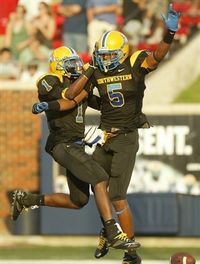 Friday afternoon during the University of Miami's third practice of the spring at Greentree Practice Field, Tommy and Jacory treated us to a replay of those long touchdown connections again. Only this time, they were wearing Canes colors. Streeter, who missed his freshman season with a wrist injury, made the play of the day Thursday. Not once. But twice! First, he hauled in a 75-yard touchdown pass during 11-on-11 drills, beating newly converted cornerback Sam Shields down the sideline on a long pass. Then, Streeter used all of his 6-5, 207-pound frame to stretch out and make a diving touchdown catch in the back of the end zone during red zone drills.

There shouldn't be MVP awards for spring practices conducted in shorts, shoulder pads and helmets. But when you consider how good Streeter looked in only his third practice back from wrist surgery, you got to give him something (at least a helmet sticker).

"It really surprised me to see him fly around like that,'' former Northwestern teammate and fellow UM receiver Aldarius Johnson said. "He looked pretty good for a guy coming off injury, being out all that time after surgery and having therapy. He talked a lot of smack before today's practice. Then, he came out and did what he said he was going to do. He stepped up today. It was like old times."

While Streeter definitely has to put on more weight to take the type of licking safeties will be sure to try and deliver on him, his emergence at receiver bodes well for the Canes. As Aldarius pointed out, "He can stretch the field," Johnson said. "That gives me and Laron and the other guys the underneath stuff. He can make a big impact."

> Streeter was the only player to a touchdown during full on 11-on-11 work, but he wasn't the only player to score Thursday. During red zone drills the following guys scored during red-zone work: Running back Graig Cooper scored on a 12-yard run, fullback Pat Hill on a 15-yard pass from Harris, tight end Richard Gordon on a 10-yard pass from Harris, and receiver Leonard Hankerson (who had a bad case of the drops for most of practice) hauled in a 15-yard jump-ball pass from Cannon Smith on a broken play.

> Other standouts from Thursday's practice included: Linebacker Kylan Robinson (who intercepted a deflected pass intended for Cooper and made a nice tackle of Javarris James after shedding a block); defensive tackle Allen Bailey (who also broke free from a block on a screen pass and drilled James); and defensive tackle Marcus Forston (who showed his speed chasing down Cannon Smith from behind).

> I've got to admit I've enjoyed the extra access coach Randy Shannon has given us for the first four practices this spring. Being on the sideline has allowed the media to really get a good look behind the scenes of who the real leaders, trash-talkers and effort guys are. During running drills today, we got a real good opportunity to listen in on how Orlando Franklin antagonizes opponents. During the entire drill he kept challenging defensive end Adewale Ojomo and clapped when Ojomo and Forston were given extra up-down drills for jumping offsides. Left tackle Jason Fox is another guy who likes to talk smack. He went over several times to the defensive players to ask them what was wrong. It was pretty funny.

> Speaking of Shannon, he wasn't at practice Thursday because he was participating in a Nike Camp in Pittsburgh according to UM's sports information staff. We were told he'll be back for Saturday morning's practice, the first in full pads.

> I don't have a lot more to share in terms of interviews after practice, but I did learn a little about the offensive line from center A.J. Trump. Don't be shocked this season if you see Trump snapping with both hands. The left-handed Trump says when quarterbacks in the shotgun, he'll snap left-handed. But when QBs are under center, he'll do it right-handed because that's how they prefer to receive it. It hasn't really caused any problems in practice yet that I've noticed.

As for potential backups, it's obvious Tyler Horn will be behind Trump when the season starts. But it was interesting to hear who UM is working in with Matt Pipho as the team's third and emergency center. According to Trump, freshman Brandon Washington is getting a look there. "He's a smart kid and he's picking up on things quickly," Trump said. "We need a third center right now, so why not."