I have to admit when I first heard rumblings this past weekend the University of Miami was seriously considering hiring John Lovett as its defensive coordinator, my first thought was someone was joking about former SNL comedian John Lovitz.

Turns out, there really is a John Lovett. So who is he? As soon I received word this was becoming official, I started making a few phone calls this afternoon to find out. So, what is beyond Lovett's resume and the more than 25 years he's spent coaching college football? What is the most interesting thing I learned about Miami's next defensive coordinator? 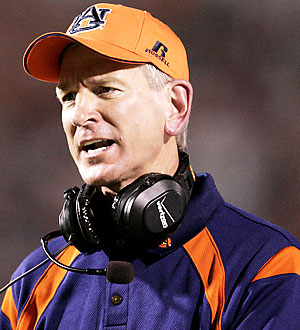 He knows how to get out of tough situations. For starters, before he even began coaching, Lovett, 58, used to drive 18-wheeler trucks in New York City, delivering furniture. Can you find a tighter place to get out of than that? Former Auburn coach Tommy Tuberville, who hired Lovett at Mississippi and then took him with him to Auburn, shared his insight into the Lovett's hiring with me. Lovett's wife Carol and Tuberville's wife have been best friends for years.

Tuberville said a similarly good relationship is what UM coach Randy Shannon said he was looking to build with his next coordinator when he called and inquired about him a few weeks ago.

"We hardly talked football to be honest," said Tuberville, who after being fired at Auburn told me he plans on taking a year off from coaching and will likely do some work with ESPN. "Randy just told me he was looking for somebody who would fit in -- fit into the community and understand the ACC. Being a defensive head coach, which I am, you got to be on the same page with your coordinator. There has to be a good relationship there. I think Randy and John are going to be a perfect fit."

Why? Because according to Tuberville, Lovett runs the same system Shannon learned under Jimmy Johnson, a 4-3 defense which lets speed take over. "John is going to run the same old 4-3 we used to," Tuberville said. "He'll mix in a few eight man fronts a little bit, be diverse in everything. Some odd man front. He knows the zone blitz game. He's been around it all."

Lovett, who moved up the ranks from walk-on to co-captain, is a stickler on technique according to Tuberville. "Everything he's going to do is going to be sound," Tuberville said. "He's very aggressive, likes to blitz. The greatest thing about that move is that he understands that league, been around it a long time now."

Another plus according to Tuberville, Lovett is also a very good recruiter, who is personable. Tuberville said Lovett is a specialist in the northeast and knows how to pull kids out of New Jersey, New York and the Washington, D.C. area.

"I know he's very excited about it," Tuberville said. "I didn't have to convince him at all. Miami is a unique school with unique players. I think its a great situation. I think they've got it going in the right direction. They've upscaled recruiting and brought in a lot of talent on the defensive side of the ball. John is coming in with high expectations, high goals."