Up next: Defensive coordinator

Last week, Shannon responded by making possibly his best hire in offensive coordinator Mark Whipple. Shannon followed it up by landing another solid recruiting class Wednesday. Next on the to do list: replacing Young and finding a defensive coordinator. It appears that decision could be coming soon.

Wednesday, Shannon discussed the defensive coordinator search, telling reporters "he's already talked with a couple of guys here and there" and promising Miami won't go into spring football practice which begins Feb. 24 without a decision being made.

I've thought all along Shannon would just do the job himself. And he reiterated Wednesday (like he said when Young first left) that he was going to find the best guy that could get it done and if not he would coach the defense. 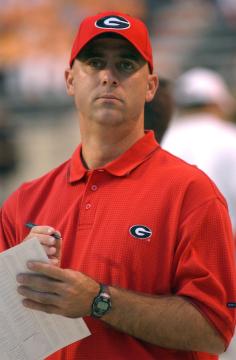 But after what he told us yesterday at his signing day press conference, that idea appears to be his last resort. Shannon said he's had conversations with other head coaches including Georgia's Mark Richt about pulling double duty. In all honesty, it seems Shannon is turned off by the idea. "That's why he got an offensive coordinator," Shannon said of Richt. "It was difficult on him He said he couldn't see [the field] like wanted to. He felt a lot better the way he's doing it now."

If that is the case, then maybe some of the rumblings we're hearing about a coordinator being hired soon (possibly in the next 48 hours) could be true. Canesport.com threw out three names as potential candidates Wednesday, all are college defensive coordinators: Georgia's Willie Martinez, TCU's Dick Bumpas and Cincinnati's Joe Tresey.

When I passed the three names through my source inside the building I was told only one of the three had merit (and that a decision could be coming soon). I'm not going to speculate which one it is, but I'm sure if Shannon said he made contact with Richt he had to have asked to have a conversation with Martinez, who was actually the first name we heard when Young left.

> Of the three candidates, Martinez would be a natural fit considering he's from Hollywood Hills, a UM graduate and a mmber of UM's first national championship team in 1983. Martinez has never done any interviews since the rumors first began. Probably, with good reason considering his friendship with Richt and the fact it would have created trouble during the recruiting process.

His resume certainly looks good. During his seven years at UGA, Martinez has been a part of three SEC Eastern Division titles, five bowl victories, and five top ten finishes in the final national polls including No. 2 in 2007. His 2006 Georgia defense ranked 8th nationally in total defense, 5th in pass defense and 1st in the SEC in third down efficiency.

> As for Tresey, he is an Ohio guy who has more than a dozen years of experience on the collegiate level and another 10 on the high school level. When he joined Central Michigan's staff in 2006, he quickly implemented a style that forced 29 turnovers and 31 sacks in 14 games. Two seasons prior to joining the Central Michigan staff, Tresey was defensive coordinator and linebackers coach at Georgia Southern. The Eagles' defense ranked fourth nationally in total defense in 2004.

> Bumpas is an older gentleman who has been around the block a lot longer, coaching in the SEC (Tennessee, Arkansas), Notre Dame and he's been at TCU since 2004 as the defensive coordinator and defensive line coach. He's been a Broyles candidate multiple times.

> We asked Shannon several questions pertaining to what he was looking for when hiring coordinators and how he went about searching for them.

His best response pertained to how he found Whipple. Basically, Shannon said he went through every NFL roster and started looking for people that he knew. "I knew coach Whipple when he was at UMass. But lost track of him. Then I saw he popped up with the Philadelphia Eagles when I started searching the website. I said 'Wow, there's coach Whipple.' Let me call him and see if he's interested."

I know by now all of us at one point or another have "googled" somebody. But I never would have thought Shannon would be doing the same to find his offensive coordinator. It's actually kind of funny.

> As for his thoughts on trying to find stable coordinators who will be around longer than 1 or 2 seasons, Shannon said: "I'm looking for guys we can have three or four years from now. I want guys who want to move up, be head coaches. You don't want a staff where guys are just satisfied being around you, you want those guys to develop, want more."

> Shannon talked a lot yesterday about how much previous relationships play roles in not only who he looks for as coaches, but even recruiting players. The fact UM signed the son of former Cane Alonzo Highsmith yesterday is no surprise.

But how they got tight end Billy Sanders was a bit of an interesting story. Sanders' father Bill Sr. played football at Sacramento State with Geoff Torretta (you should know why that name is famous around The U). It was through Torretta Shannon found out about Sanders, who left Phoenix to go play his senior year  in Idaho. I'm pretty sure if not for the connection, Miami probably would have never known about Sanders.

As for other interesting recruiting connections: Defensive tackle Curtis Porter has a family member that knows someone who works on campus; offensive lineman Malcolm Bunche played at the same high school as Orien Harris; and Prince Kent, a cornerback from Georgia, is originally from Fort Lauderdale. One Shannon didn't mention involved running back Lamar Miller. His grandfather Edgar drives a student shuttle bus at UM.

> According to Shannon, defensive end Eric Moncur has been granted a sixth year of eligibility. Shannon said he thinks safety Randy Phillips will be back too.

> Shannon said only three players will miss this spring because of injuries: Tight ends Tervaris Johnson and Dedrick Epps and linebacker Colin McCarthy. Moncur is considered 50/50.

I know I promised a recruiting blog today, but I figured getting some of these notes in from yesterday was more important. We'll have plenty of time the next few weeks to breakdown this class. I've got tons of interviews already done with some experts and kids I want to share with you.