Aubrey Hill: "We want to hit on more big plays"

ATLANTA -- It used to be the staple of the University of Miami offense. Ken Dorsey, Gino Torretta, Vinny Testaverde would drop back in the pocket scan the field and then fire a laser beam deep down the field. On the other end, Michael Irvin, Andre Johnson and Lamar Thomas would come racing under it, hands stretched and in a flash, they'd be gone, one their way to the end zone for six. 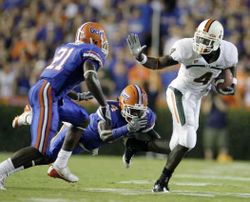 It's felt like an eternity at The U since a Miami offense provided such excitement. Last year with Patrick Nix, fans were treated more often to the wide receiver bubble screen than the good old Hail Mary. But in the first few days coach Randy Shannon has allowed the media to watch his team practice this spring, we've noticed something strange (an unidentified flying object if you will). That would be the football being thrown deep down the field again.

Could it just be an early spring practice aberration? Could be Jacory Harris just practicing the deep ball here and there? Or is Mark Whipple's new offense showing signs it's going to take advantage of the new big, strong, speedy weapons the Canes recruited two Februarys ago and stretch opposing defenses? At Tuesday's practice, I caught up with receivers coach Aubrey Hill to find out what the deal really is.

"You look back to last year, we definitely want to hit on more big plays," said Hill, whose young receiving corps . "That's something you want to do every year... Not necessarily making a comparison [to last year], but I will say this about our [new] playbook: we're attacking all areas of the field and also were trying to move a lot of guys around and put the ball in their hands in all different places. We have an NFL playbook."

And, quite possibly, NFL-caliber receivers to make those plays. While Hill said he's been impressed with all of his receivers in some way shape or form, he pointed to Laron Byrd and Aldarius Johnson as the guys look like they're ready to take the next step. Johnson led the team in receiving last season with 30 catches for 321 yards and 3 scores. Byrd finished fifth with 18 catches for 184 yards and 3 scores. Both look more physically imposing this spring even if they aren't weighing a lot more than last season.

"You look at those guys and you can definitely see they have been in the weight room with coach Swasey," Hill said. "You can see the maturity and hunger for those kids. They compete with each other all the time. Both of those guys can be all-conference type players soon."

Hill admits he's been impressed from what he's seen early from two players he didn't have a year ago because of injuries, redshirt freshmen Tommy Streeter and Kendall Thompkins.

"He's a big target," Hill said of Streeter. "He's a smart kid. He can run. He has decent hands. He didn't play last year. So we obviously want to make sure he's going fast and getting into the playbook. But the good thing for him and Kendall is we have a new playbook. They're all learning from scratch together. The one thing you see with Tommy is he's better each day. As long as he can continually improve, that's what we want to see."

As for Thompkins: "Without a doubt he brings versatility because he can play slot and the outside receiver. He becomes a valuable player already. He's very elusive. He can make the first guy miss. He can catch the passes. Kendall and Streeter are two great additions for us."

With Sam Shields moving over to defense and several seniors from last season gone, Hill doesn't have many veterans. His oldest player is junior Leonard Hankerson. While Hankerson has struggled with drops throughout his career (including this spring), Hill said the 6-3, 215-pounder is making strides.

"With Hank, it's almost like you want to put a glue on the ball when the quarterback throws it to him because that's the last piece he needs," Hill said. "But in fairness to him, he's been a lot better in other areas. Your talking about the kid that has the right size, the right speed, has the right mentality and is very smart. We're trying to put that last piece together. When that ball is in the air and its a big situation for the team, we want him to do well. That's what this spring is all about."

> I'll be at tonight's UM-Georgia Tech game in an about an hour. Just a couple more quick notes to pass along...

> Shannon told us Tuesday he's going to keep practice open for the media. I obviously wasn't at Wednesday's. But I'll be back out there on Friday and Saturday when the Canes are set to scrimmage for the first time.