Frank Haith's basketball team has one of best NCAA Tournament bubble resumes is the country, one that features a strong strength of schedule, no bad losses (teams ranked higher than 100 in the RPI) and four wins vs. Top 50 RPI teams. But UM is still probably going to need to do more than just beat Georgia Tech and N.C. State this week to guarantee themselves a shot at getting back to the NCAA Tournament.

The Canes (17-10, 6-8) are more than likely going to have to win a game or two next week at the ACC Tournament to play their way in. OR, they must get some help this week from other teams to move up the final regular season standings and strengthen their case before the selection committee announces the 65-team field on March 15th. 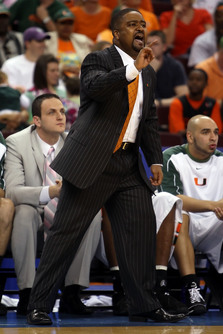 As it stands, the Canes have no choice but to win out to even stay in the bubble discussion. The dilemma facing the Canes, however, is if they do win and get back to 8-8 in conference play, there are still eight teams who could finish in front of them in the ACC standings. And each can present strong cases of their own to get asked to the dance before Miami. By all accounts (including those from ESPN bracketologist Joe Lunardi), it's highly doubtful the selection committee would stretch beyond taking eight teams from the ACC -- even if it is considered the No. 1 RPI conference in the country. That means a first round loss in Atlanta by Miami -- even after four straight wins to finish the regular season -- would likely spell doom for its NCAA Tournament hopes.

So what does that mean UM can do to avoid going into next week's ACC tournament still in complete must-win mode? Climbing the final regular season standings, which UM can do. But as it stands right now, unless others lose, UM will finish ninth.

Mathematically, there is no chance for UM climb past North Carolina (11-3), Duke (10-4), Wake Forest (9-5), Florida State (9-5) or even Clemson (8-6). But according to the ACC tiebreakers (which take into account head-to-head meetings and group record before going to the best win scenario), UM could still catch and pass Boston College (8-6), Maryland (7-7) and Virginia Tech (7-7) in the standings this week. They're just going to need help.

While there are several scenarios in which UM could finish as high as a sixth seed (including if BC, UM, VT, Maryland all finish 8-8), most of the head-to-head tiebreakers don't go in UM's favor. So, the best thing to do if you bleed orange and green is root for the Terps, Hokies and Eagles to lose their final remaining games. Here is a guide to help you keep track of the season-ending madness, which should answer some questions you might have this week.

> Boston College (20-9, 8-6): The Eagles could still soar as high as the fourth seed because the own the tiebreaker with FSU and turn out to be an RPI boom for UM, which beat them twice. But BC could also help UM out by losing twice and moving out of UM's way. Remaining schedule: @N.C. State (Wed), GT (Sat).

> Maryland (18-10, 7-7): The Terps split the season series with UM, but own the individual tiebreaker (their best win came versus North Carolina). Still, if they drop their final two games and slip past UM in the standings they'll likely play their way out of the tournament and help UM's chances significantly. Remaining schedule: Wake Forest (Tue), @Virginia (Sat).

> Virginia Tech (17-11, 7-7): The Hokies own the head-to-head tiebreaker against UM because of their overtime win at the BUC back in January. But they've got the toughest schedule to close out the season and are the most likely team of the three in front of UM to slip past the Canes. Remaining schedule: North Carolina (Wed), @FSU (Sun).