Unless you forgot to pay your monthly subscription to InsideTheCanesportTimes or were out enjoying two days off on South Beach like I was this past weekend (leading my best friend's bachelor party), you probably know by now the Canes picked up their third football "commitment" of the 2010 class Sunday in Miami Booker T. Washington receiver Quinton Dunbar. 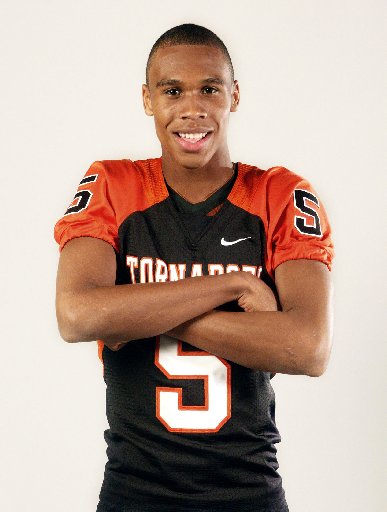 Monday night, I caught up with Dunbar and Booker T. receivers coach Andre Brown (who handles most of the recruiting talk between colleges and the Tornadoes). Dunbar, a 6-3, 177-pound All-Dade First Team selection last season, is obviously a nice get for the Canes and a tremendous talent. But the bigger story is he might just be the first of a handful of talented Booker T. players in the 2010 class who decide to make their way down the road to UM from Overtown next February.

"The first thing I thought when I got back this weekend and heard Quinton had committed was 'Alright, whose next?," said Brown, who coached current Canes Davon Johnson and Thearon Collier at receiver at Booker T. "It's obvious having Ice over there [former Booker T. coach Tim Harris] helps Miami a lot. They're very aware what we've got coming out in our next class."

What Booker T. has next season is arguably the best class in Miami-Dade County, which by all accounts is absolutely loaded with talent. Dunbar is rated the 13th best player in the county according to our Larry Blustein's Pre-Spring Top 30 list. Other Booker T. players included on the list: talented running back Eduardo Clements (7th), defensive end Lynden Trail (18th), receiver Ted Meline (20th) and offensive lineman Jose Jose (24th). Brown said UM has already offered all of them, except Meline.

Clements, the MVP of the Class 4A state championship game in 2007, is the prized recruit. At 5-11, 175-pounds there isn't a more complete running back in South Florida in my opinion. I've been told UM considers him its No. 1 running back target for 2010 and another reason coach Randy Shannon doesn't feel so bad about losing out on Bryce Brown. "He's just as good a pass catcher, if not better than Bryce and has played against tougher competition his entire life," one recruiter told me. "Miami wants him badly."

The Canes were the first school to offer Clements and according to Brown, who is Clements brother-in-law, it means a lot. But the roadblock for UM appears to be Florida State, whom Clements grew up rooting for. According to Brown, the Seminoles decided to finally drop Clements an offer Monday. "He's a Florida State guy at heart," Brown said. "The situation is going to be real tough. We've had a lot of family gatherings to talk about everything, but we're allowing him to make up his own decision."

As for Dunbar, consider him about as sound and committed a Canes recruit as there can be. He grew up rooting for UM and living down the street from the Orange Bowl. He wears No. 5 because his favorite player, Andre Johnson, wore it (he said Shannon already promised it to him after Javarris James leaves). His second cousin is UM cornerback Chavez Grant. And, his best friend is Collier. Brown said he expects Dunbar, who has a 3.0, to be a full qualifier.

"The thing that makes Quinton special is that he has just a great knack for getting to the football," Brown said. "When that ball is in the air, he gets into attack mode. He might not run a 4.3, but he has great game speed. We're going to work a lot on catching the ball and knowing what to do in open space. He can get better at route running too. But it's utilizing head fakes, those hips so he can be more like Larry Fitzgerald after the catch."

> Got to give some props to the UM baseball team for their series sweep of Florida this past weekend, especially the 16-2 pounding the Canes delivered on Sunday. It marked the first time under Jim Morris UM swept the Gators in Gainesville, and it helped move UM up in the polls. The Canes are now ranked as high as eighth in the ESPN/USA Today Coaches' poll (there are too many college baseball polls). David Gutierrez, by the way, earned ACC Pitcher of the Week honors for his seven scoreless innings in Saturday's 2-1 win.

> Among my many phone calls Monday, I caught up with one of the weekend's heroes in left fielder Jonathan Weislow. I don't want to give away too much about Weislow, but there might not be a player whose gone through more excruciating injuries than this guy. It's a good story I'll share with you later this week as UM kicks off a 12-game homestand against Rhode Island on Tuesday at 6.

> It turns out Jack McClinton will not have his jersey number retired this weekend after all. Coach Frank Haith said during his weekly ACC teleconference with media on Monday morning that UM wants to be bring Jack back next season and honor him during another game. It's a smart move. Saturday's noon tip-off against N.C. State is going to be emotional enough. Not only will it be senior day, but if UM beats Georgia Tech Wednesday then the Canes will have the opportunity of getting back to 8-8 in the ACC (likely what they need to reach the NCAA tournament). The last thing you want is an extra distraction at a time like this.

> ESPN's Joe Lunardi has the Canes still in his bracketology report. Right now, Lunardi (who hit on all 65 invitees last season) has UM seeded 12th and facing UCLA in the first round. I think the highest seed UM will get if it wins out this week and wins at least one ACC Tournament game is 10th. But I'd like to ask Lunardi, who is supposed to have a teleconference with the media Wednesday, what he thinks the best case scenario for Haith and the Canes is if they accomplish that or better to get in.

> Since some of you have been asking, I finally got around to uploading several audio bites from spring practice, baseball and basketball from the last two weeks. Just visit the usual place to find them.