Jack is back on All-ACC First Team

A sprained left knee slowed Jack McClinton down toward the end of the regular season, but it didn't stop him from capping his senior season by earning more special honors. 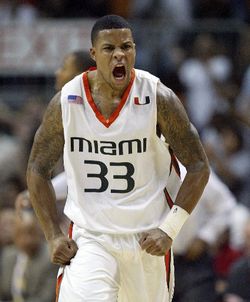 Monday afternoon, the 6-1 senior from Baltimore joined Tim James as the only the men's basketball players in Hurricanes history to earn all-conference first team honors twice. The 76 members of the Atlantic Coast Sports Media Association voted McClinton to the All-ACC First Team with 188 votes, only three more than Wake Forest guard Jeff Teague for the fifth and final spot on the top team.

McClinton was joined on the first team by first-time four-time selection Tyler Hansbrough of North Carolina, who was a surprising unanimous selection. Florida State guard Toney Douglas, UNC's Ty Lawson and Duke's Gerald Henderson were the other first team selections. No other Hurricane was selected to any of the other teams.

McClinton struggled down the stretch of this season, shooting a combined 9 of 37 over his final three games. But he obviously did more than enough during the rest of the regular season to impress voters including a spectacular stretch during the middle of the season in which he produced back-to-back-to-back 30-point games against the leagues' top three teams -- Wake Forest (32), Duke (34) and North Carolina (35).

So, now, it's only right I ask you, where should Jack McClinton rank all-time in UM basketball history? Tim James won the Big East Player of the Year in 1999. Rick Barry was an All-American and first round NBA pick. Dick Hickox and Don Curnutt were All-American Second Team selections in the 60s and 70s. John Salmons earned All-Big East Second Team honors and now has a budding NBA career. Give me your thoughts on Mr. McClutch and what he's meant to the program.